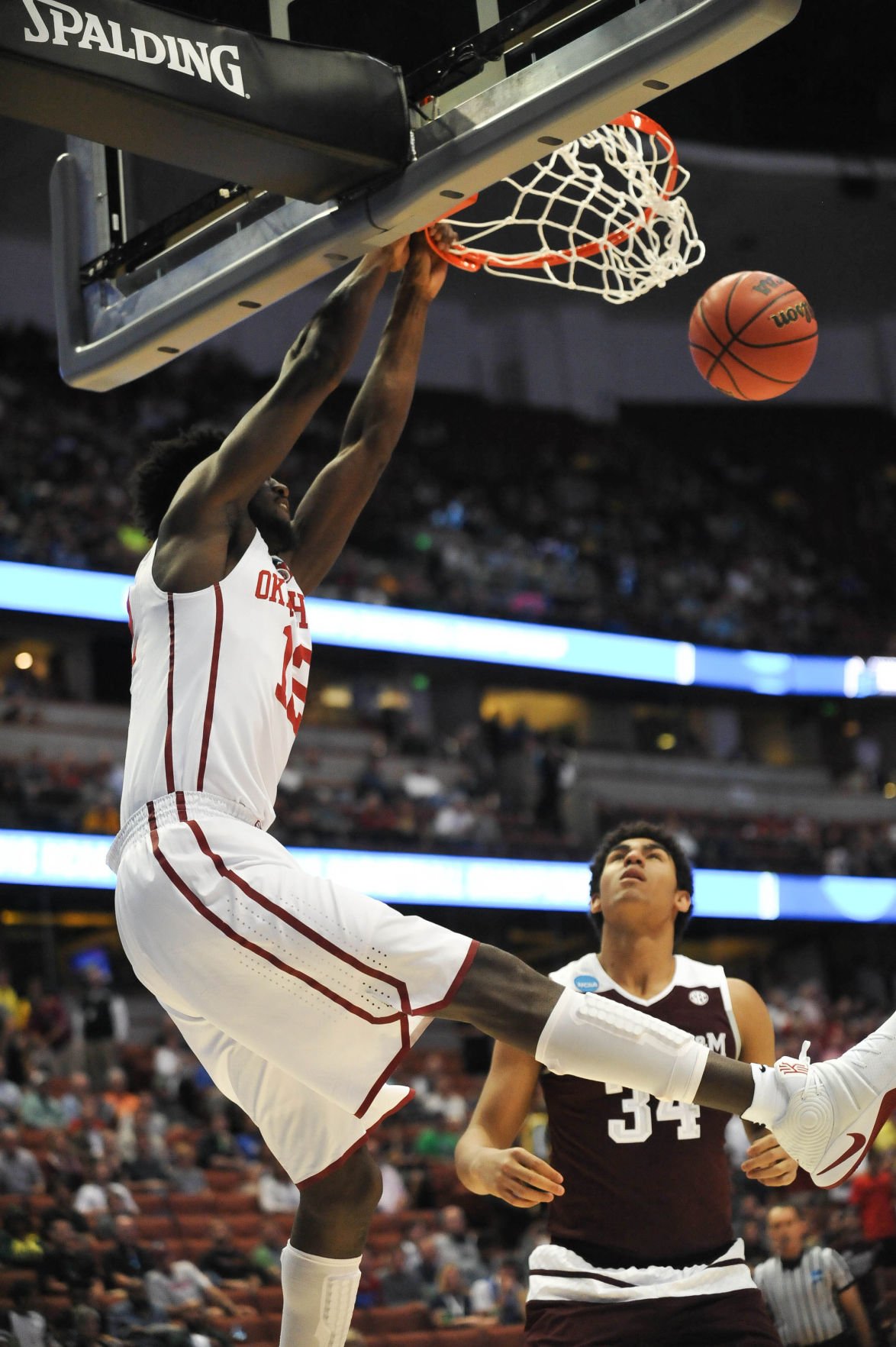 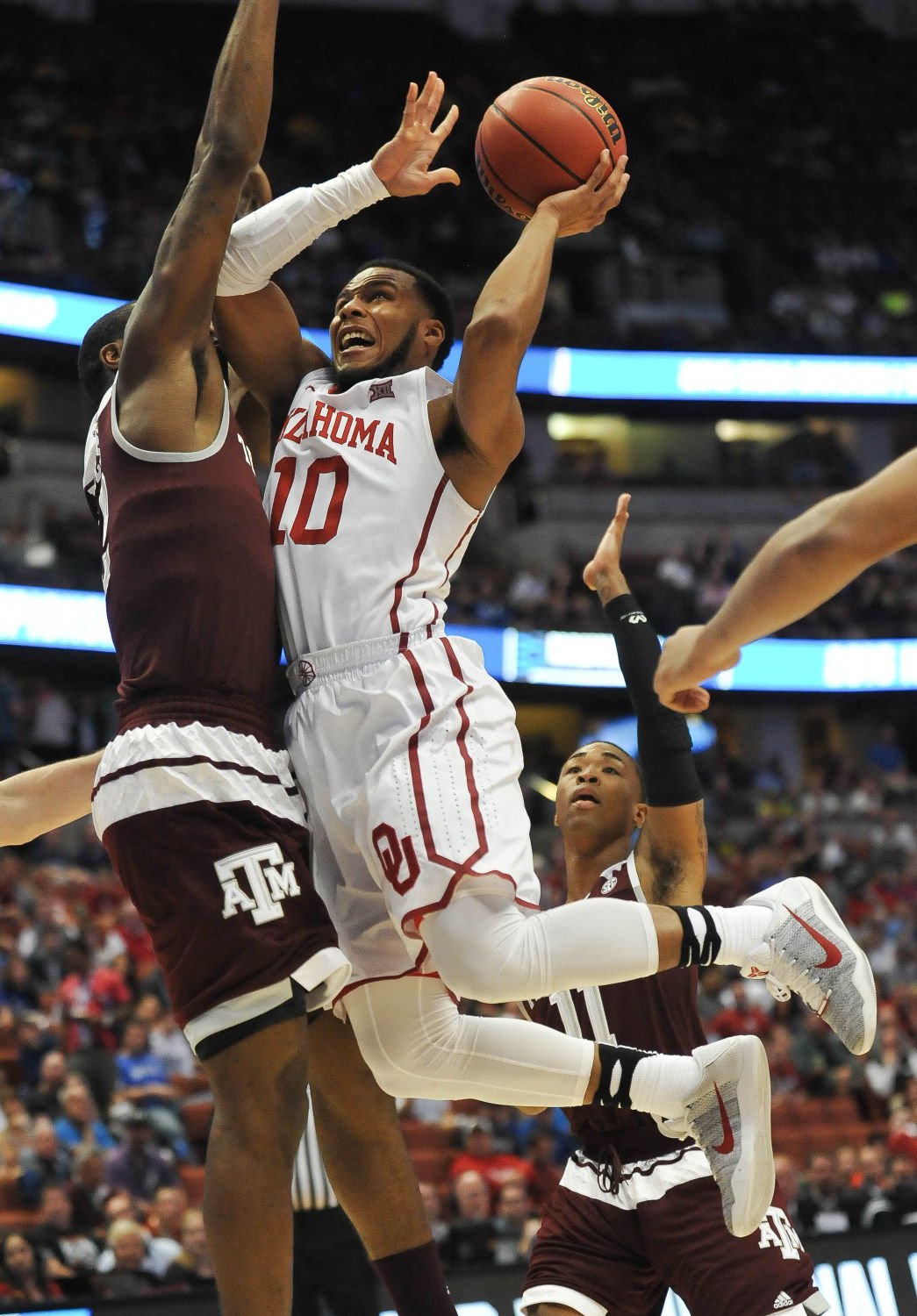 OU's Jordan Woodard goes in for a shot during the Sooners' game against Texas A&M, Thursday, Mar. 24, 2016, at Honda Center in Anaheim, Cali.

OU's Jordan Woodard goes in for a shot during the Sooners' game against Texas A&M, Thursday, Mar. 24, 2016, at Honda Center in Anaheim, Cali.

ANAHEIM, California — Oklahoma was more than 1,000 miles from home and Honda Center was far from familiar territory. Neither mattered to the Sooners.

They looked like a team that expected to be in the NCAA Tournament’s Sweet 16 and believed it has a couple more wins in it.

The 77-63 victory over No. 3 seed Texas A&M in the West Regional semifinals served notice the Sooners’ ceiling is still rising.

“I feel like each step we get more locked in because we’re getting closer to where we want to be,” said OU guard Jordan Woodard after scoring a game-high 22 points. “Coaches, they really draw up great game plans for us to execute. It’s our job to go execute it.”

For the last 35 minutes, the Sooners, who are the region’s No. 2 seed, did. The win moved them into the Elite Eight for the first time since 2009.

OU wasn’t able to advance that far last season. A four-point loss to Michigan State in the Sweet 16 ended the season. For 12 months, its failure to advance spurred every extra sprint, weight lifting session and extra shot in the practice gym.

The work was evident Thursday night. The Sooners found a gear the Aggies (28-9) couldn’t match midway through the first half.

OU actually fell behind by seven points in the opening minutes. That was difficult to believe when it unleashed a 19-4 run to close the first half.

Buddy Hield scored 17 points and pulled down 10 rebounds. The double-double was his first of the season. Texas A&M did everything it could to stop him.

The overwhelming attention opened the door for everyone else wearing white.

Woodard went 8 for 11 from the field and 5 for 6 from 3-point range. Christian James came off the bench to score 12 points. Ryan Spangler and Khadeem Lattin both finished with 10.

“Defensively, we paid so much attention to Buddy I think we fell asleep at times on the weak side and gave up lay-ups,” Texas A&M coach Billy Kennedy said. “Then the basket got a lot smaller when we started missing shots.”

The Sooners (28-7) will face top-seed Oregon for a Final Four trip Saturday.

The only starter with a below par scoring night was Isaiah Cousins. He scored two points — and dished out eight of the Sooners’ 23 assists.

“We’re at our best when we’re moving the ball and getting stops on defense,” Cousins said. “It started with defense tonight.”

The Aggies (28-9) advanced to the Sweet 16 with their miracle comeback against Northern Iowa last Sunday. They used a 14-2 run in the last 44 seconds to force overtime and eventually win in the second extra period.

Tyler Davis led Texas A&M with 17 points. The freshman center scored 13 points in the second half and was 6 for 6 from the field after the intermission.

The overwhelming run late in the first half gave the Sooners a 45-26 halftime lead. The lead never dipped below 11 and swelled as large as 20.

“I liked their play last weekend in Oklahoma City. I thought we played better there than we had for two or three weeks. Today, of course, I feel great about the way they played, the way they attacked, made plays for each other,” OU coach Lon Kruger said. “Again, good to see different guys stepping in and contributing. So, yeah, I think we’re playing as well right now as we have since maybe mid-January, late-January.”

That team is capable of winning a national championship. After Thursday’s destruction of Texas A&M, the Sooners are just three wins from reaching the goal.