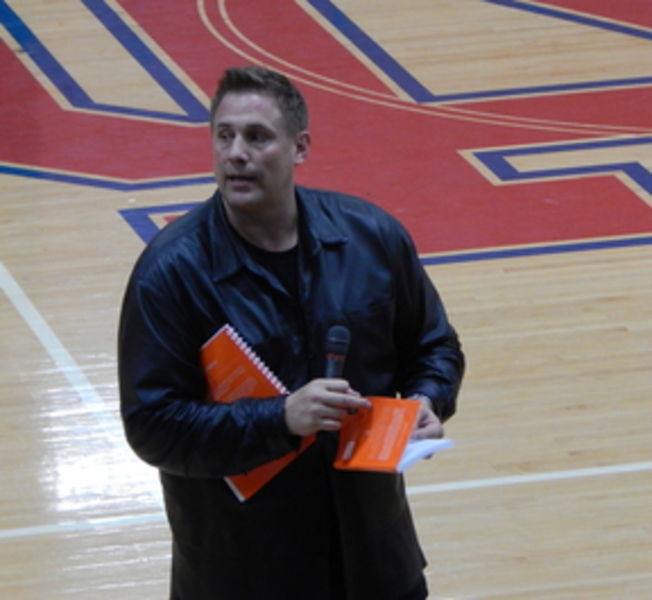 Motivational speaker Chad Varga reads from his new book toward the end of his presentation at North Decatur High School Wednesday afternoon. 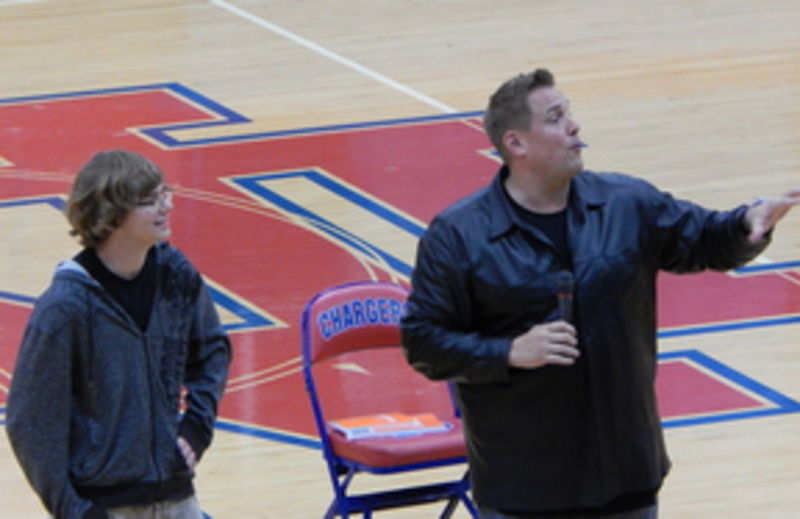 Varga illustrates a lesson that success doesn't just happen and successful people have to take action to get what they want. NDHS student Lucas assists during Varga's presentation at NDHS Wednesday. 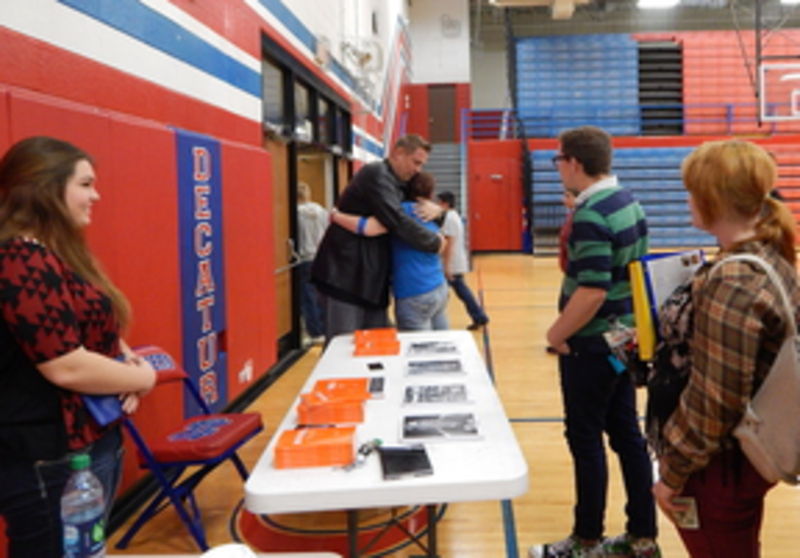 Chad Varga gives a hug to one student moved to tears after his presentation. Chad took the time to speak to all the students waiting after the presentation. Varga's very personal story of rising above the horrific abuse of his childhood seemed to resonate with many of the students.

Motivational speaker Chad Varga reads from his new book toward the end of his presentation at North Decatur High School Wednesday afternoon.

Varga illustrates a lesson that success doesn't just happen and successful people have to take action to get what they want. NDHS student Lucas assists during Varga's presentation at NDHS Wednesday.

Chad Varga gives a hug to one student moved to tears after his presentation. Chad took the time to speak to all the students waiting after the presentation. Varga's very personal story of rising above the horrific abuse of his childhood seemed to resonate with many of the students.

Looking at the confident, upbeat man that entered the gymnasium at North Decatur High School (NDHS) Wednesday, no one would guess he’d grown up enduring horrific child abuse on a daily basis. No one would imagine that he and his sister grew up watching their mother destroy her life with a series of abusive boyfriends, drugs and alcohol addictions. And, knowing how his life started, few would predict how successful he would become. Few except Chad himself, that is.

Katie Delph, president of Students Against Destructive Decisions at NDHS, gave Varga a glowing introduction before passing the microphone to the motivational speaker. Varga commanded the attention of every student at NDHS, which is no small feat in itself.

Varga began his presentation by telling the assembled students about himself. He outlined all the ways he has been successful in his life: phenomenal high school basketball career, first person in his family to go to college, career with the Dallas Mavericks in the NBA, a career in the professional basketball league in Europe and now the founder and president of Inspire Now.

At 25 years old and the height of his career, Varga turned down a multi-million dollar NBA contract that would have ensured him financial security. He’d had a moment where he realized that his experience and background gave him the rare opportunity to make a difference to others. In the seven years since walking away from basketball and speaking to teens across the country, Varga has spoken to more than 3.5 million students.

By the time he began telling stories of his childhood, his dynamic presence had already captivated the attention of everyone in the room. Varga grew up in a broken home in Detroit. His mother was a violent alcoholic and drug abuser, but despite her addictions, when Chad’s parents divorced, she was given custody of him and his older sister, Wendy.

Varga shared some of the terrible instances of abuse he experienced from a young age. As a toddler, Varga remembers being given cups with alcohol and juice to keep him quiet and out of the way while his mother partied with her friends. He remembers being dragged out of bed at two in the morning by the hair to ride along with his mother to get drugs. Sometimes she would leave Chad and his sister in the floorboard of the car, sometimes locked them in the trunk and sometimes, took them inside with her- experiences he remembers with horror to this day.

At 13 years old, when schools were beginning to cautions students about the dangers of drug use, Varga needed no convincing. Seeing his mother, who had been sober for months, relapsed and passed out on the couch was more than enough reason for him to never touch drugs or alcohol, as were the years of substance abuse he’d already witnessed.

At 14, he attempted to stop an abusive boyfriend from beating his mother and received a thorough thrashing himself, leaving him with two cracked ribs, numerous cuts and bruises and scars that linger to this day. That was a low point for Chad and he even considered suicide to escape his troubled life.

Chad credits putting his faith in the Lord as one of the reasons he was able to rise above the circumstances of his childhood and triumph over the disadvantaged beginnings of his life. He said there were times when his faith was all he had to get him through some of the darkest moments imaginable.

A caring teacher kept young Chad after school one day to ask what was going on at home after noticing several concerning things. At first, Chad resisted opening up, but when he realized the teacher genuinely cared, he let go and told him everything. The teacher placed a call to the authorities and soon after, custody of Chad and his sister was awarded to their father. Life improved drastically for Chad after that.

As his presentation wound down to a close, Varga spoke directly to all the young ladies in the audience, saying they needed to demand respect from the men in their lives.

He told a touching story of meeting a 14 year old girl named Erica. She was at a home for young girls who were pregnant or already had children. Unlike the other girls living there, Erica came from a wealthy family and had all the material possessions she could desire. She didn’t want to tell her story because she didn’t believe Chad cared. Once he convinced her to speak, he learned that not once did her parents ever tell her they loved her. She then latched on to the first man to say he loved her and ended up pregnant. When he left, she was utterly alone.

She asked Chad to tell her story when he spoke to other girls. “Tell them, ‘Ladies, if he love you, he will treat you with respect,’” Erica said.

While the assembly laughed, Varga taught an important lesson. “I’m not advocating stealing by any means, but successful people don’t just raise their hands. They make their success happen. Every single one of you has great gifts, use them.”

At the end of his presentation, Varga spoke about his new book, Bounce: Down is Inevitable, Up is a Choice. The ending of the book, which details many of the stories from his childhood, was written by Chad’s mother, who he has since reconciled with now that she is sober. He said it wouldn’t be complete unless she finished it. The book, which will officially release later in November, will be tied in with Common Core standards for schools that wish to use it as an educational tool.

Varga received a standing ovation when he concluded his speech and the line of students wanting to speak to him directly stretched across the room. Several students were moved to tears and Chad took the time to comfort anyone he saw in distress. For many students, the time spent listening to Varga speak appears to have made a lasting impression.