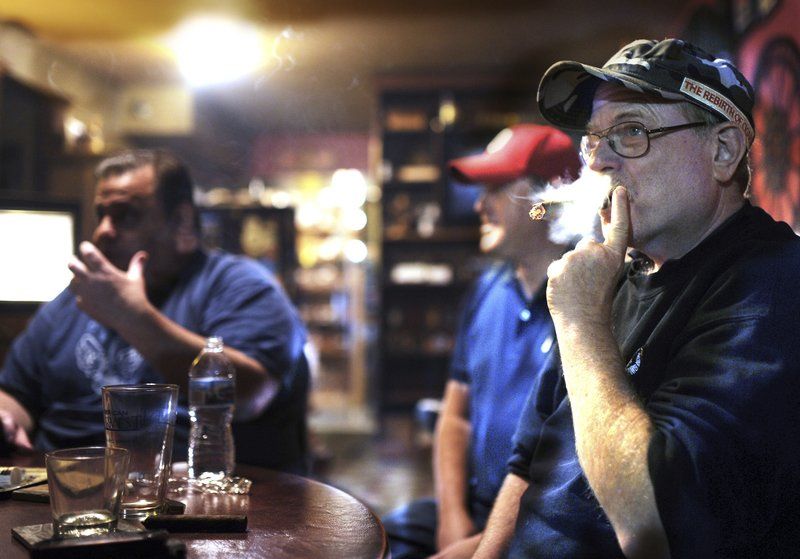 Tyler Stewart | CNHIMike Jackson, right, puffs on his cigar while enjoying the Riverside Cigar Shop lounge with friends on Tuesday evening in Jeffersonville. 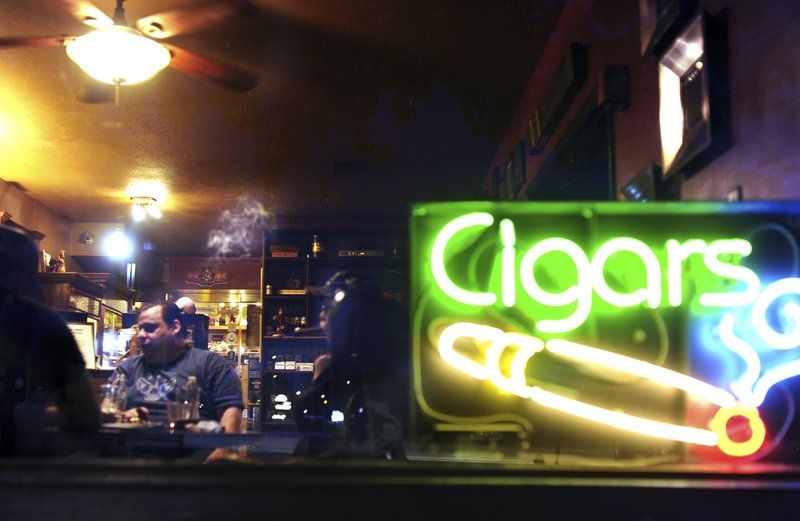 Tyler Stewart | CNHICustomers smoke cigars around a table inside the Riverside Cigar Shop lounge in Jeffersonville on Tuesday evening. Legislation is working to pass a bill that would lift the 2012 smoking ban that barred smoking inside public facilities, including shops that sell tobacco only products, throughout Indiana. Businesses like the Riverside Cigar Shop, which were in operation before the 2012 ban, were exempt from the law.

Tyler Stewart | CNHIMike Jackson, right, puffs on his cigar while enjoying the Riverside Cigar Shop lounge with friends on Tuesday evening in Jeffersonville.

Tyler Stewart | CNHICustomers smoke cigars around a table inside the Riverside Cigar Shop lounge in Jeffersonville on Tuesday evening. Legislation is working to pass a bill that would lift the 2012 smoking ban that barred smoking inside public facilities, including shops that sell tobacco only products, throughout Indiana. Businesses like the Riverside Cigar Shop, which were in operation before the 2012 ban, were exempt from the law.

INDIANAPOLIS – Inside the cozy Office Cigar Lounge in Floyds Knobs, you can buy a rare $60 Arturo Fuentes Opus X cigar, lounge in leather chairs and watch sports on big-screen televisions.

But you can’t light up.

For that, you’ll have to step outside and move at least eight feet from the door. Outdoor heaters help ward off the chill. This past winter, smokers looking to come in from the cold could repair to a Winnebago in the parking lot.

It’s not the setup that owner Tom Uhl envisioned when he opened the cigar lounge two years ago in this affluent suburban community north of New Albany.

“It’s like opening a Wendy’s and being told your customers can’t eat their burgers inside,” he said.

That’s about to change. In the waning days of the legislative session, language slipped into an obscure tobacco bill clears the way for smokers to light up inside Uhl’s establishment. And it opens the door for other cigar bars, as well.

The measure does away with part of the statewide smoking ban imposed three years ago, when the General Assembly barred smoking inside most public facilities including shops that only sell tobacco products.

The law exempted tobacco retailers that were already in business but forbid smoking in any new cigar bars. It put a crimp on new cigar bars. There’s only about 40 shops in Indiana that strictly sell cigars and less than dozen cigar-only lounges.

This year’s change had some surprising support. It was endorsed by the current and past chairmen of the House Public Health Committee, Rep. Ed Clere, R-New Albany, and Rep. Charlie Brown, D-Gary.

Both had pushed legislators, unsuccessfully, to expand the smoking ban to include casinos, which were also exempted in 2012. But they saw a difference in the tobacco retailers.

“It’s not the same as a casino, where people who don’t smoke are exposed to smoke,” Clere said. “There’s nobody in a cigar bar who doesn’t smoke.”

Uhl is elated. He started planning his cigar lounge before the smoking ban passed. But by the time he found the right location, signed a lease and got his tobacco retail license from the state, it was too late.

Still, he decided to open and stock the lounge with premium cigars, most of which cost $8 to $12. He installed a humidor, put in big-screen TVs, along with sofas and lounge chairs, and a high-end ventilation system. Then he waited for the Legislature.

In the meantime, to abide by the smoking ban law, he set up tables and chairs on the sidewalk, eight feet from the door as required by law. When it was hot, he put up tents to shield smoking customers from the sun. When it turned cold, he installed outdoor heaters. When it got colder, he brought in the motorhome.

“It’s been a business killer,” he said of the law. “We had people who wanted to come, but the weather was just too brutal.”

Loyal customers want more than a place to buy a cigar, he said. They want ambiance and camaraderie – fellowship with the kind of people who enjoy an expensive cigar.

“I have people coming in here all the time, asking if I sell cheap cigars or cigarettes,” he said. “I tell them they’ve to go to the gas station for that.”

News of the relaxed ban was also welcomed by Jeff Mouttet, who opened his Riverside Cigar Shop and Lounge in Jeffersonville before it went into effect. His business was grandfathered, so his customers can light up all they want.

“I think it’s great for the industry,” Mouttet said. “The more cigar bars, the better.”

Mouttet said he’d have a tough time staying in business if he had to put smokers on the street.

“We sell an experience, we don’t just sell cigars,” he said. “We’re like 21st century barbershop. We’re a gathering place.”

The legislation that cleared the way for more smoke-filled cigar bars also removes some other requirements imposed by the smoking ban. Private clubs and fraternal organizations no longer have to make members vote on whether to allow smoking on the premises.

The bill also calls for another deep dive into the smoking issue in the form of a summer study committee that will consider the impact of hiking the cigarette tax, regulating electronic cigarettes like traditional ones, and expanding the smoking ban to casinos.

The legislation, if signed by Gov. Mike Pence, would be effective July 1.

Maureen Hayden covers the Statehouse for CNHI’s Indiana newspapers. Reach her at mhayden@cnhi.com. Follow her on Twitter at @MaureenHayden.