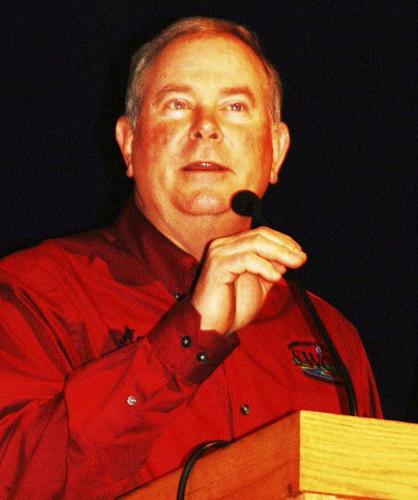 Debbie Blank | CNHI News IndianaThe Jennings County Soil and Water Conservation District board was committed to the Share Some Space Community Pollinator Project, said Andy Ertel. “Every one of our board members has either a pollinator garden or a field they planted.” 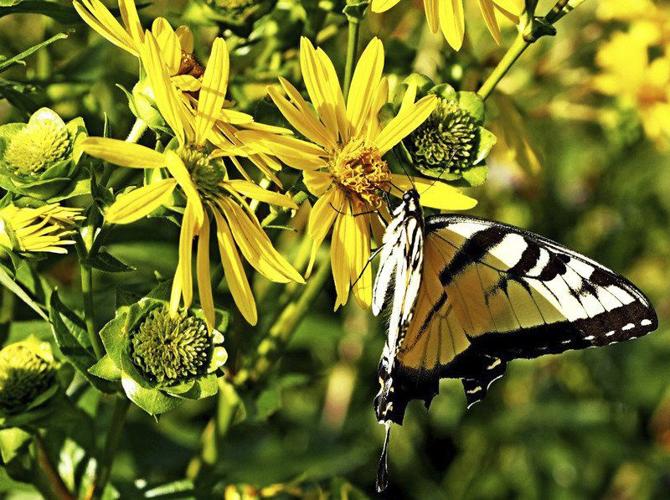 Contributed PhotoOf a habitat, the guest speaker observed, “As soon as you build it, they come” and begin pollinating nearby plants, a necessary step for the growth of many fruits and vegetables.

Debbie Blank | CNHI News IndianaThe Jennings County Soil and Water Conservation District board was committed to the Share Some Space Community Pollinator Project, said Andy Ertel. “Every one of our board members has either a pollinator garden or a field they planted.”

Contributed PhotoOf a habitat, the guest speaker observed, “As soon as you build it, they come” and begin pollinating nearby plants, a necessary step for the growth of many fruits and vegetables.

BROOKVILLE – Citizens in one area county have been able to lure bees and butterflies back to their farms and gardens to pollinate crops.

First he reminisced: “We’re going to go back to around 1970 ... Little kids liked to play out in the yards. There were a lot of dandelions. There were European honeybees. Around the house, Mom had flowers and there were giant bumblebees. It was pretty neat.”

“Over time things really have changed. America decided back then it was going to go clean ... and green. We trimmed a lot, we mowed a lot and removed a lot of habitats pollinators needed ... we just could spray anything” with pesticides, which killed harmful and beneficial insects.

In 2014 the U.S. Department of Agriculture reported, “Important pollinator populations are declining.” Ertel asked, “Who were those pollinators?” He said the rusty patched bumble bee is now on the Endangered Species Act list and the monarch butterfly might be added.

“A lot of people don’t realize flowers need to be pollinated with the same species of flowers” to produce seeds for the next year. “If a pollinator goes on a cucumber plant, then it goes on a watermelon plant, it doesn’t do any good.”

“Close to 75 percent of the flowering plants on the earth rely to some degree on pollinators in order to set seed or fruit. From these plants comes one-third of humankind’s food and even greater proportions of the food for much of our wildlife,” noted the district’s pollinator plan.

“European bees are the most efficient pollinators,” the guest speaker pointed out. If they visit blueberry plants, they stay there all day, making nine to 12 trips back to the hive. “They get all this pollen attached to their furry skin ... They can carry 90 times their weight. They work for 30 days, then they die, because they work themselves to death. They provide us with all those beautiful fruits and vegetables where we get vitamins and minerals.”

“We don’t see the pollinators like we once did when we were younger,” Jennings County Soil and Water Conservation District board members agreed in June 2015. “We talked about the hives starting to decline.”

Eight board members on a pollinator committee wanted to see if they could get area residents to help combat the decrease in bees and butterflies. The group grew to 25 active members in four counties. The committee named the initiative Share Some Space Community Pollinator Project.

The goals were to educate the public and create new habitats. The director recalled, “We looked at people, places and what projects we wanted to do.” The committee figured if native flowers were planted, they would attract pollinators.

The group worked with a federal agency and ended up with 1,500 free Burpee seed packets. Each would seed about a 5-by-10-foot area. Citizens said, “We can do that.” It took 20 minutes for a supply of seed packets to be given away at a farmers’ market.

Members installed displays at libraries and talked to groups.

“In spring 2016 we decided we needed to make a stand” by hosting a pollinator plant sale with a goal to sell 300 plants. He crowed, “We ended up selling almost 3,000” to 140 customers. New pollinator habitats are tracked on the website’s map, which can be viewed at http://www.jenningsswcd.org/map.php.

The committee worked with the Farm Service Agency and used a Clean Water Indiana grant to offer a $200 cost share program to farmers, which added plants to 440 wildlife acres, field borders and filter strips. “That’s what we’re after,” Ertel said.

The group persuaded North Vernon city park leaders to install a quarter acre habitat. Passersby called the district “and told us it was the nastiest-looking weed patch ... they didn’t ever get out of their cars to see how many flowers were in this patch.”

“The second year it exploded into all colors. We had so many butterflies ... instead of being the creeps, now we were the heroes!” FFA members built frames to contain signs about the importance of pollinator habitats.

With one school official on the committee, “we did 4 acres right beside the middle school.” Third- through fifth-graders were educated about the pollinator process. At all seven elementary schools and one middle school there are monarch way stations.

“One project was very successful. We decided to create an interactive walkway at the Jennings County fairgrounds to teach them about native plants. ‘Where are you going to get the money?’” he was asked. Soon businesses and organizations stepped up to contribute dollars for the fence and pergola. Paving and rocks were donated. “In about three months we had it done. It was pretty amazing.” When attendees strolled through the walkway with its informative signs, more wanted to jump on the habitat bandwagon.

A pollinator field day attracted 124 attendees, the largest JCSWCD event ever. “We had a lot of breakout sessions,” including one about the walkway. “We kept asking people, ‘Where are you going to put your garden? We just want you to share some space.’”

The third sale’s order deadline is March 16. To download an order form and brochure: www.jenningsswcd.org/plantsale.php. Plant pickup is May 3 from 4-7 p.m. at Muscatatuck Park, 325 N. State Road 3, North Vernon. Proceeds will go to the Share Some Space Project.

The presenter detailed more successes. In 2017 an old, unused school football field was planted with native flowers and grasses instead of being mowed. “It’s a little weedy, but that’s normal. Butterflies, bees, hummingbirds, they move in.”

Tree saplings were planted at the Violet and Louis J. Calli Nature Preserve, but deer ate them. Ertel pleaded, “‘I just want 4 acres.’” The community foundation gave him the money for Hoosier plants. “Once we sprayed the fescue, milkweed (a favorite of monarchs) exploded all over, which immediately brought the butterflies in. It has the most abundant wildflowers as you go down close to the river. It’s just beautiful.”

Jennings County High School ag students built bluebird houses for the project, which were installed at the nature preserve. When the houses were cleaned last fall, volunteers noticed they were all used. “If you provide what nature needs, it’s an instant response,” he contended.

The committee finished a photo book called “A Collection of Native Flowers in Jennings County.”

What’s on tap for 2018? Project leaders will use a $2,000 grant from the tourism commission to draw visitors. “We’re going to tell everybody we are the pollinator capital of Indiana. You ought to come hike.”

To spread the word, the project now has a Facebook page. “We also bought some signs,” which will be posted at various sites. “POLLINATOR HABITAT: Do not spray or mow.”

“We’re going to go get the materials so the kids can build their own garden” at St. Mary’s School.

Three more habitats will be created on 3 acres at the new 750 bypass, 4 acres at American Axle and 10 acres at Sand Creek.

The Jennings County Soil and Water Conservation District executive director has told Sierra Club and national SWCD leaders about how effective this program has been.

“Over time our pollinator populations are going to continue to grow.”

He promised, “Our story will have a happy ending.”