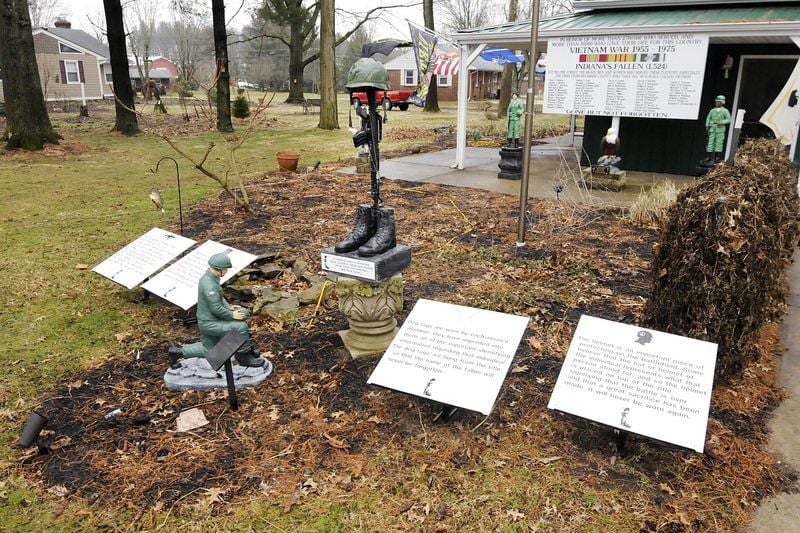 Don Knight | The Herald BulletinMichael Knight started last summer to turn his back yard into a Vietnam War memorial. 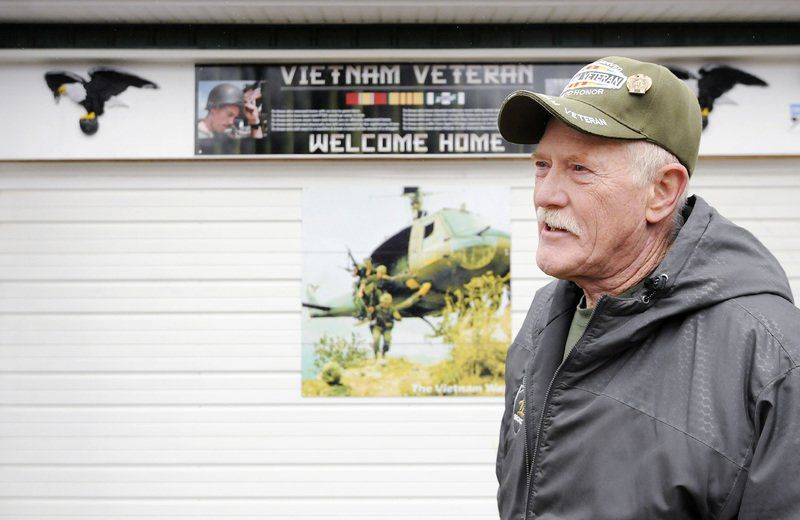 Don Knight | The Herald BulletinMichael Knight wants to give his fellow Vietnam veterans the welcome home they didn’t get when they returned from Vietnam. Feeling survivors guilt about how fortunate his life has been after returning from war he built a memorial to honor his fellow veterans.

Don Knight | The Herald BulletinMichael Knight started last summer to turn his back yard into a Vietnam War memorial.

Don Knight | The Herald BulletinMichael Knight wants to give his fellow Vietnam veterans the welcome home they didn’t get when they returned from Vietnam. Feeling survivors guilt about how fortunate his life has been after returning from war he built a memorial to honor his fellow veterans.

DALEVILLE - Even though it was a misty, 48-degree day, Mike Knight pulled off his jacket and pointed to the words on his T-shirt.

Knight puts effort into honoring Vietnam War veterans. He turned part of his home into a memorial, he wears memorial T-shirts and hats and he tells people that March 29 is National Vietnam War Veterans Day.

Indiana Sen. Joe Donnelly is celebrating the day by holding an event in Plainfield. Knight said the event is one of the few he could find online.

Knight was drafted by the U.S. Army in 1964. He and his wife, Judy, were married shortly before he left. Knight was deployed in the 129th Aviation Battalion in October 1965 and returned in May 1966.

“It was scary and lonely and I wrote him a letter every day,” Judy Knight said. “ All I could hope was that he would come home and we could have a life.”

Mike Knight said he was blessed because his time overseas was short and not as horrific as others.

“I don’t know how anyone goes over and sees stuff, far more than what I saw in any way, shape or form and come back to shut it off,” he said. “We all just tried to act like none of it happened.”

Returning from the war was like putting an eraser to the past. He said he got off the plane, put on civilian clothes and tried to forget about everything he experienced.

But there have been repercussions. He said he was in an area near Saigon that was heavily sprayed with Agent Orange, an herbicide containing a deadly dioxin, sprayed by U.S. military to reduce foliage and forest cover.

The consequences of exposure to Agent Orange are severe. Effects include rashes, cancer, birth defects and severe psychological and neurological problems, according to the Vietnam Veterans Association.

Knight was diagnosed with prostate cancer and heart disease, due to his exposure to Agent Orange.

“All I could hope was that he’d come home and we could have a life. He came home, he’s so blessed, he wasn’t injured,” his wife said. “Then came the problems from Agent Orange. It’s a big cost ... we’ve suffered a lot with it.”

Nevertheless, Mike said the disability checks he received for those problems made him feel like he was getting money because other soldiers died. Those checks started going toward building a memorial in the summer of 2017, he said.

“I had to do something. I couldn’t just accept this money,” he said.

What began with one small statue grew into a landscape of statues, flags and signs with information about the war and who served.

Every part of the memorial has a purpose: a soldier’s cross statue, signs of statistics, flags in order of military branches and their casualties, a woman soldier statue, a black soldier statue, a list of Hoosier veterans and on the back of that sign, signatures of vets who served. Knight said he invites every veteran who has visited, or family of vets, to sign the back.

The memorial will be complete with a 4-foot eagle statue that will arrive in the next few weeks, Knight said. Once it’s done, he said, he will continue to recognize his fallen brothers and sisters the best way he can.

“I just want people to know that they died and they didn’t have to. It wasn’t their fault. It wasn’t their idea,” he said. “And the ones they came back, nobody welcomed anybody home. No one ever knew who to say, ‘welcome home’ or say ‘thank you.’”

Vietnam ... by the numbers

Kevin D. Gaultney, 66, passed away at St. Vincent Hospital in Indianapolis on October 20, 2021. Kevin was born in Lincoln, Il on June 20, 1955. Per his wishes, Kevin will be cremated and a celebration of life will be held at a later date. To leave online condolences, please visit www.popfune…