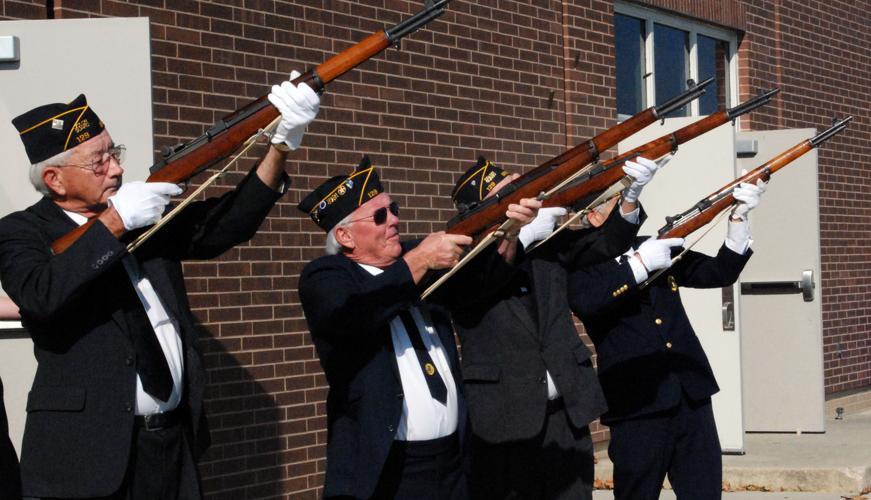 Members of the American Legion offered a loud salute at the close of North's Veteran's Day program.

As the military anthems were played, veterans stood to a roar of applause 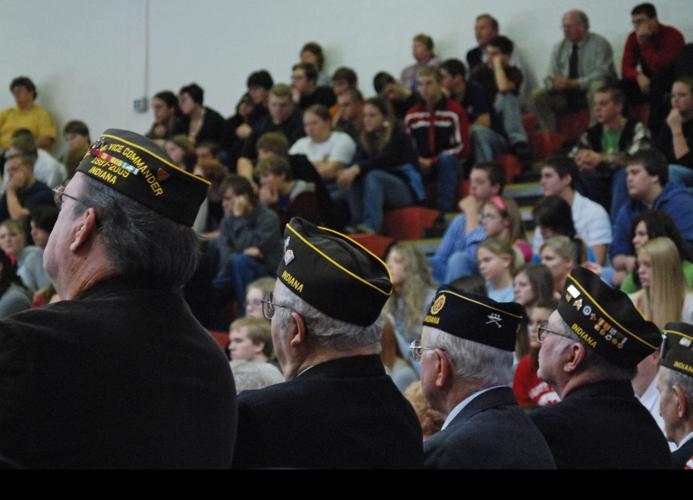 Veteran members of the American Legion, survey the crowd of students and staff at North. 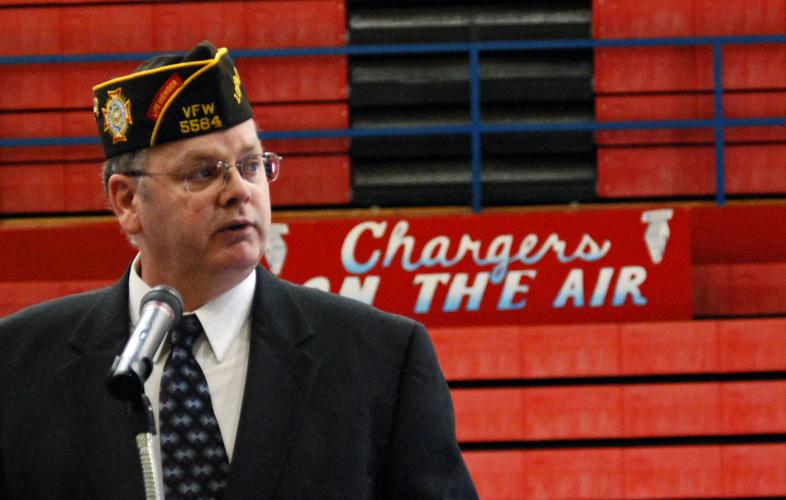 Mike Clark, North graduate, talks of his experiences in the United States Navy.

Members of the American Legion offered a loud salute at the close of North's Veteran's Day program.

As the military anthems were played, veterans stood to a roar of applause

Veteran members of the American Legion, survey the crowd of students and staff at North.

Mike Clark, North graduate, talks of his experiences in the United States Navy.

North Decatur High School students dedicated part of their day Friday to honor veterans of the United States Armed Forces. Although Veteran’s Day officially fell on Sunday, event organizer Max Neimeyer decided it was better to observe it early rather than to let it pass before doing anything. It is important for him to honor the men and women who risked their lives in service to this nation. So, for the 10th time, students, teachers and staff gathered in North’s gymnasium for a program that made an impact on all in attendance. “What an outstanding message the kids received today,” said Dr. Dan Roach, superintendent of Decatur County Community Schools. A record number of veterans proceeded into the large room before a standing-room-only crowd. The North Symphonic Band performed a medley of military anthems and veterans were encouraged to stand as their branch’s was played. The morning’s first speaker was Mike Clark, a 1971 graduate of North. With the knowledge he would likely be drafted, he chose to join the Navy in October of that year. He served at sea as a boiler technician. “When you’re out on a big pond, in 25-foot waves, you don’t just call it a day,” he said of his long days in the boiler room. For 21 years, he served in the Navy. “I have seen many things others only dream about,” he said. “I love this country and would do anything to defend her.” Clark also said if the Navy called and asked him to serve again, he would. He is proud of being an American and encouraged the students not to be ashamed to show their patriotism. R. Ryan Stewart served in the Army for 15 years; surviving three tours of duty abroad. As the second speaker, he spoke with great gratitude about his service in the Army where he was trained to be a combat engineer. These are the soldiers who watch over the troops on the ground by clearing areas with explosives and creating barriers to enemy re-entry. They also serve as infantrymen. In his travels, he learned how lucky he was to have been born in America. “I’m fortunate to come from a place of plenty,” he said. Stewart served as part of the forces that ended the genocide in Croatia. While he was there, the American troops put the Serbian forces in full retreat and ended their slaughter of Albanians. “We stopped the largest genocide in Europe since the Holocaust and returned like rock stars,” he said. Unfortunately, the time came when it seemed his luck had run out. While serving in the War on Terror in Iraq , a grenade landed at his feet. He turned to warn his men just as it exploded. The blast filled his body armor with shrapnel and slammed his head into a wall. The next thing he knew, he woke up in the hospital. When he awoke, he called out to the nurses to ask why he couldn’t open his eyes. They told him his eyes were open but the damage to his scull blinded him. He had 36 pieces of bone in his brain and brain stem. The doctors told him he would never see again. He soon began rehabilitation to learn to deal with his condition. “It was the most difficult thing I ever went through,” he said. Just as he was coming to grips with never seeing the faces of his wife and children again, he woke up on the morning of Aug. 7, 2005 and saw a faint glow through his eyelids. The doctor told him it was just a random neurological response. However, two hours later, he could see the doctor’s red tie. What had been a tragedy, led him to the happiest moment of his life, he said. He is grateful the Army was committed to him. To give him the best chance at survival and recovery, the military hired a civilian neurosurgeon. Stewart said he stood before the audience Friday as a very lucky man. “You don’t spare any expense in helping us survive the wars we fight,” he said in thanks to the American people. Army Pvt. Donnie Moore, currently a senior at North, offered his thanks to the soldiers whose footsteps he follows in. He gave each veteran a certificate of appreciation. “Their sacrifice creates a debt we will never be able to repay,” he said. After graduation, Moore will be traveling to Mississippi to continue his training.