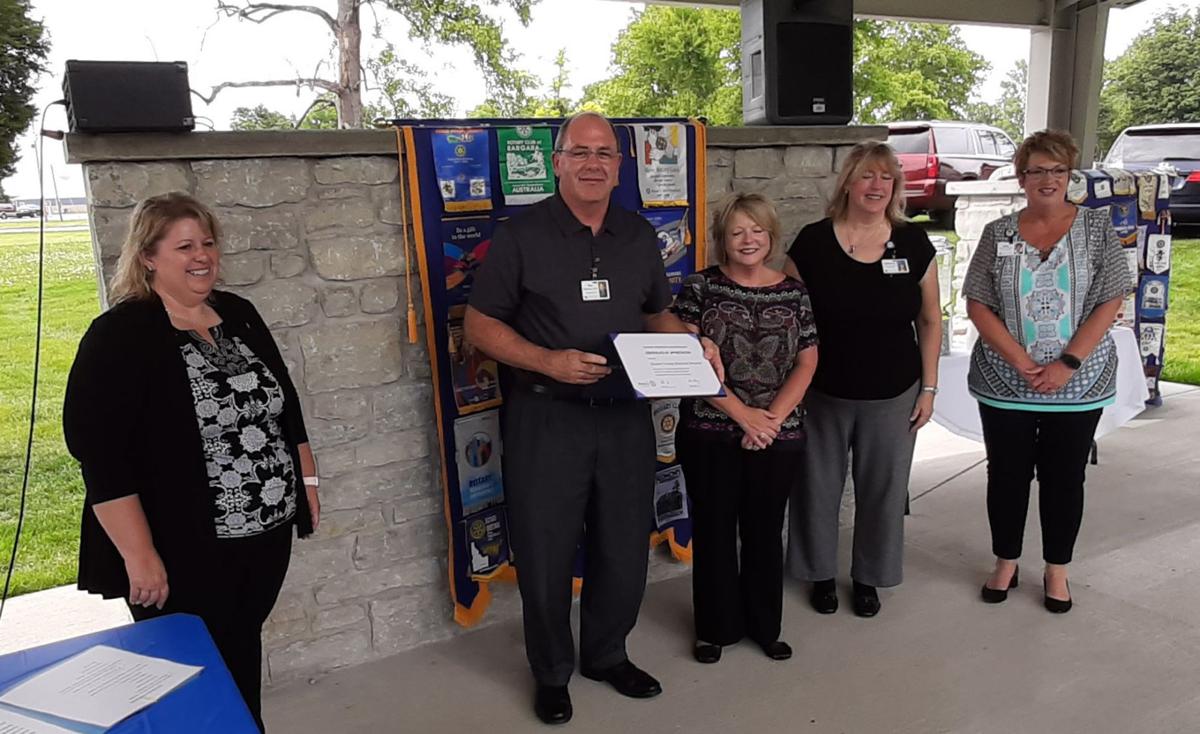 Lora Williams, Greensburg Club President for the 2019-2020 Rotary year, is pictured with representatives from one of the club’s corporate sponsors, Decatur County Memorial Hospital. 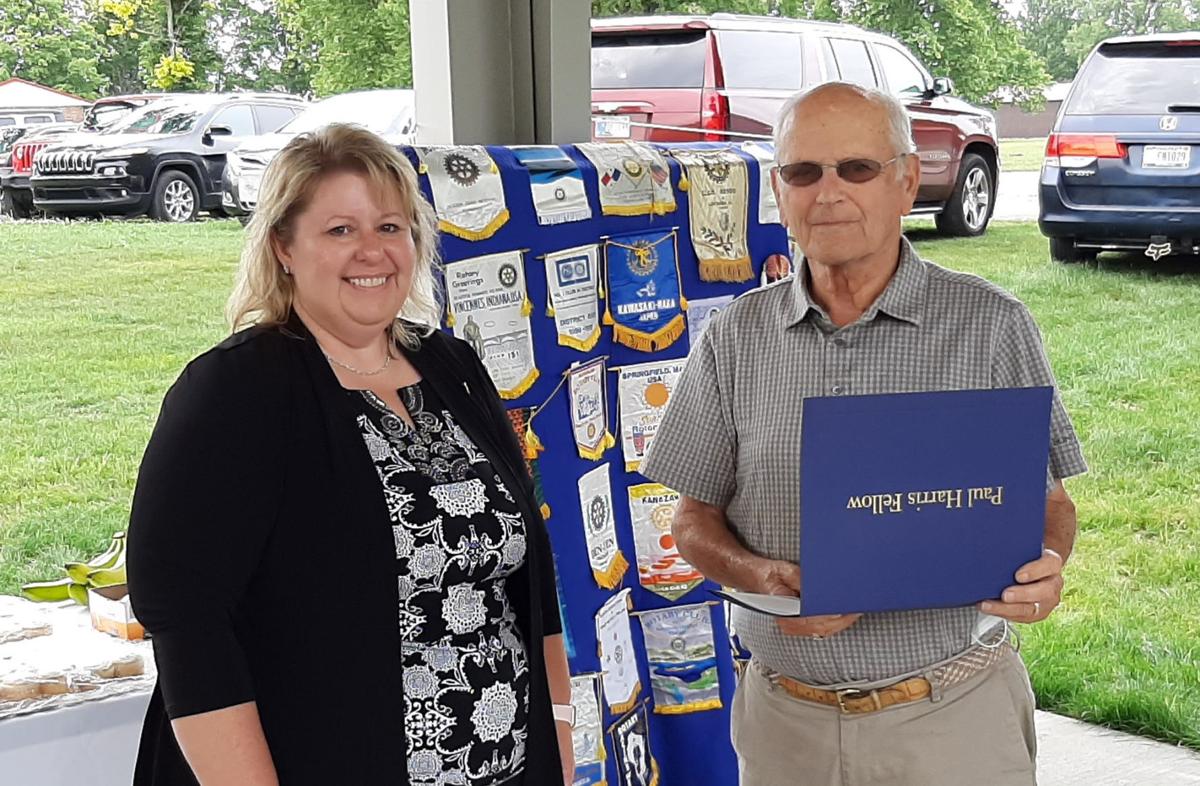 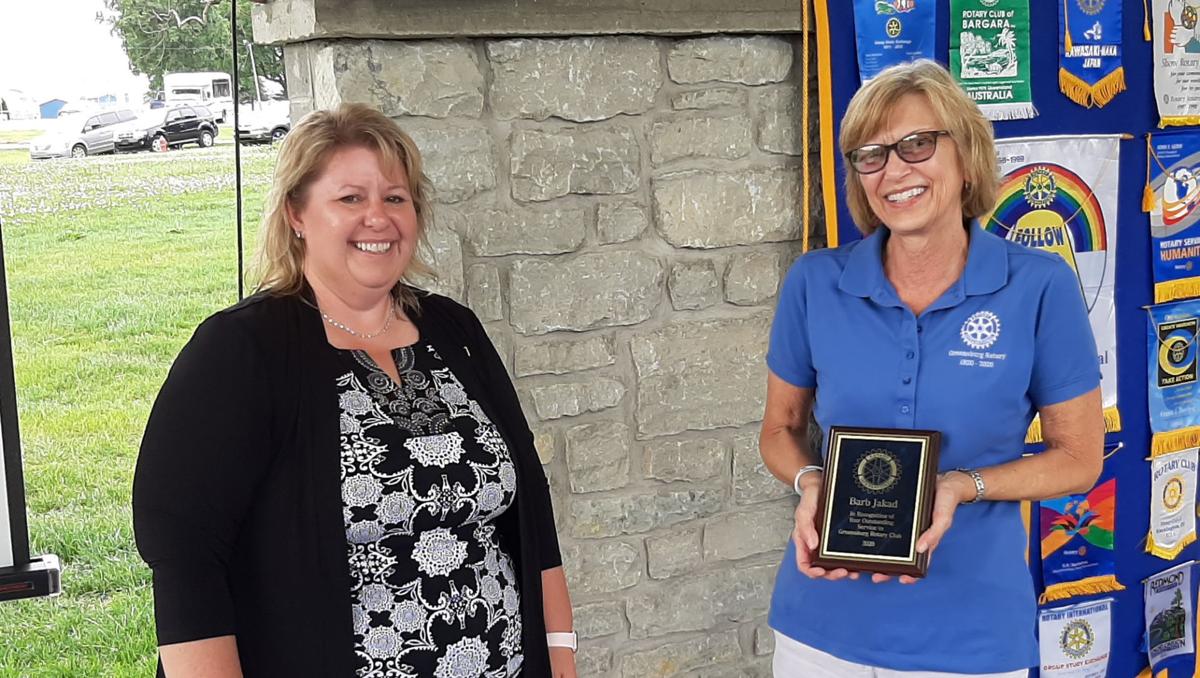 Lora Williams, Greensburg Club President for the 2019-2020 Rotary year (left), is pictured with Barb Jakad. Jakad, who serves as the club’s secretary and weekly newsletter publisher, was presented the President’s Award. 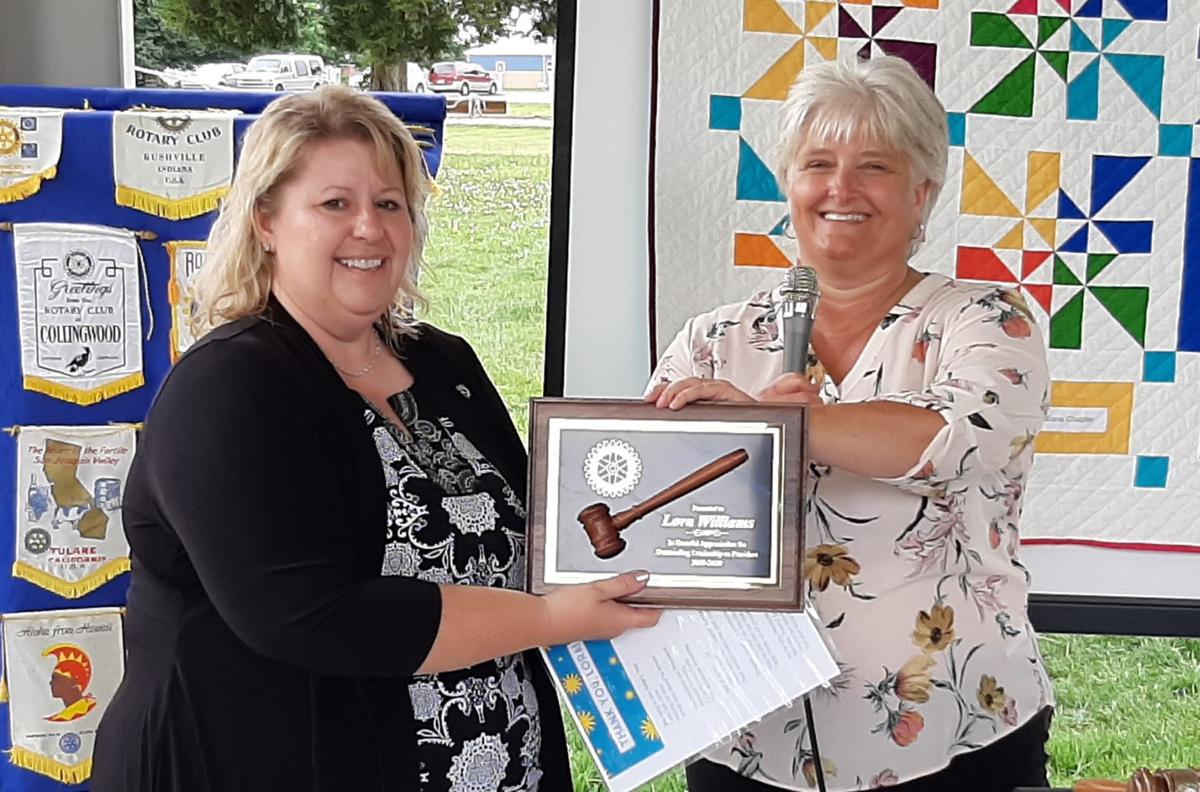 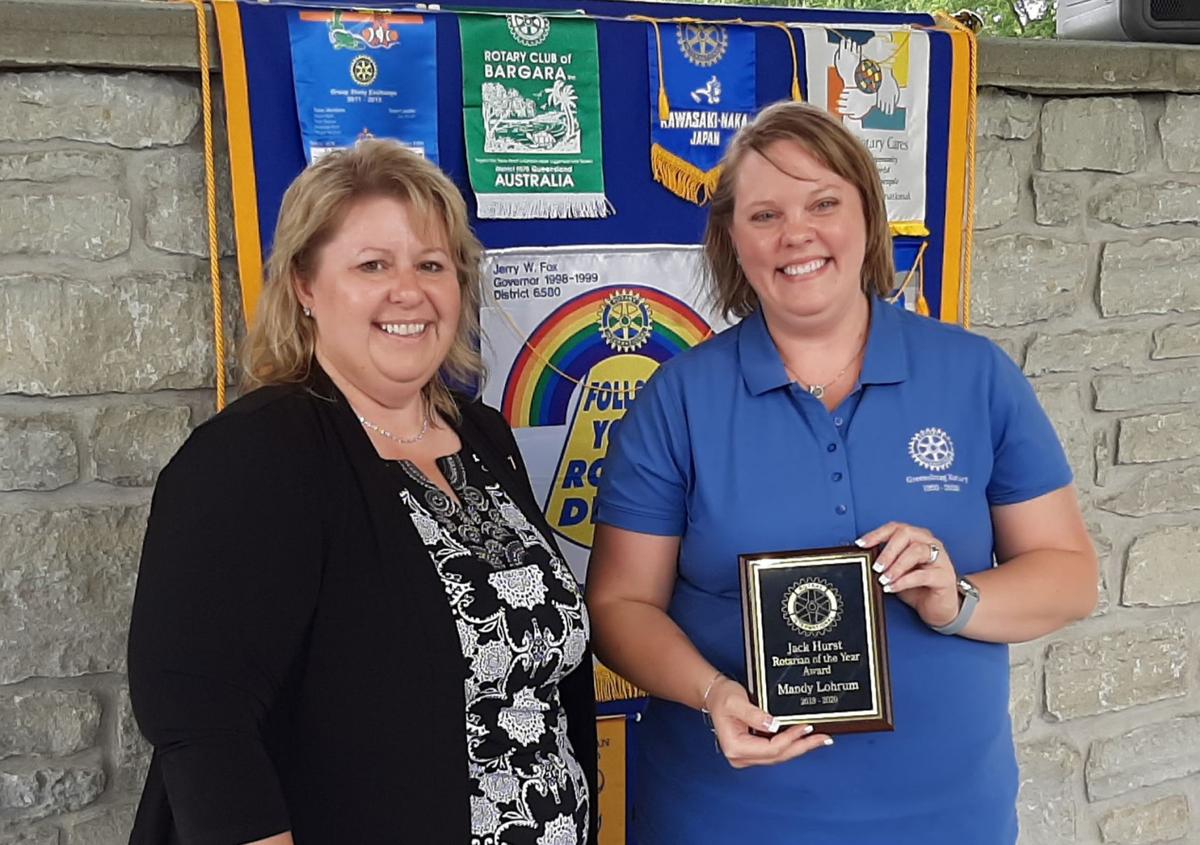 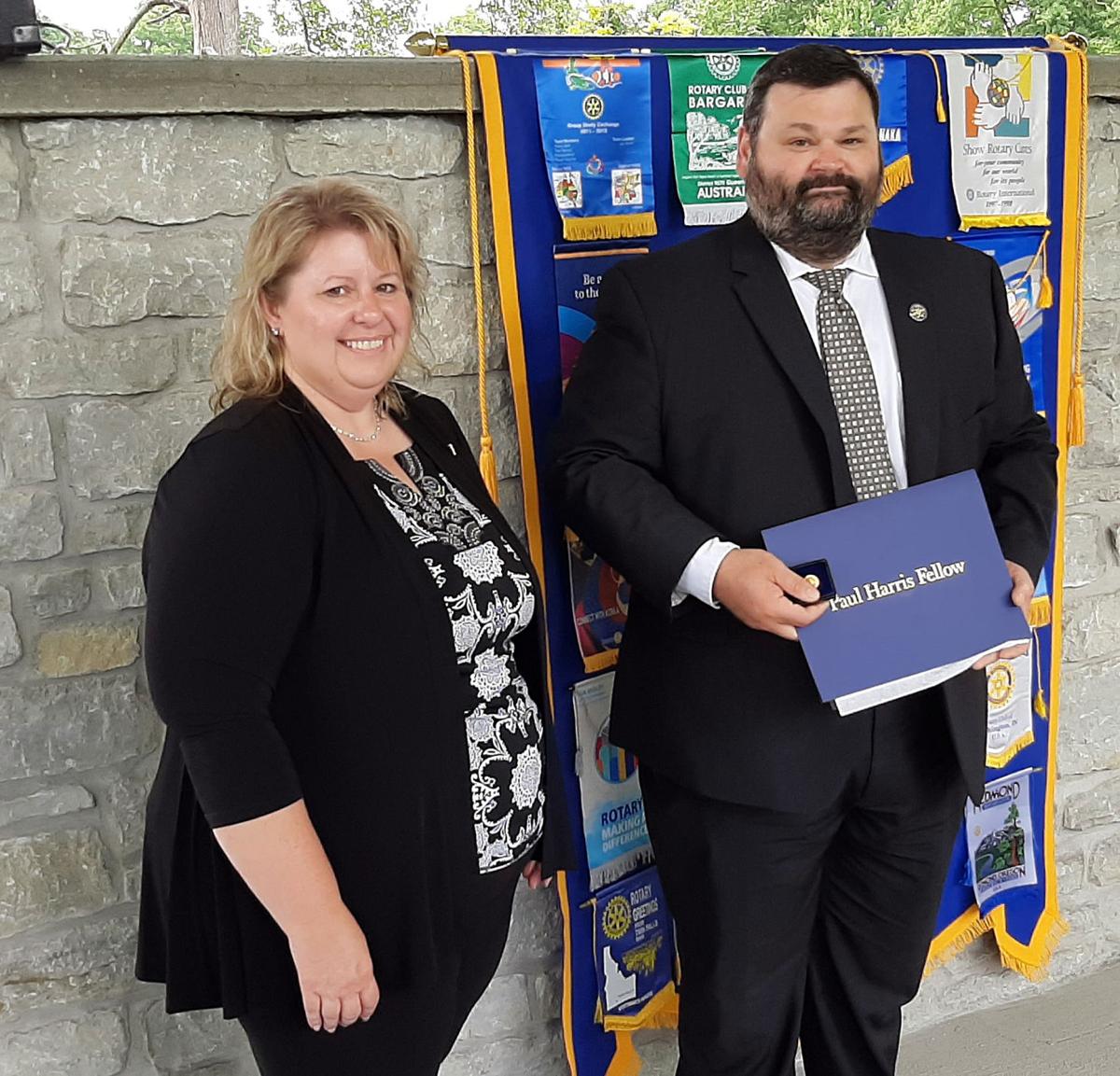 Lora Williams, Greensburg Club President for the 2019-2020 Rotary year, is pictured with representatives from one of the club’s corporate sponsors, Decatur County Memorial Hospital.

Lora Williams, Greensburg Club President for the 2019-2020 Rotary year (left), is pictured with Barb Jakad. Jakad, who serves as the club’s secretary and weekly newsletter publisher, was presented the President’s Award.

GREENSBURG — Greensburg Rotary Club #3437 in Rotary International District #6580 recently held its officer changer over meeting and awards presentation at the new amphitheater located in Rebeka Park. It was the first event to be held at the theater since it was constructed.

Lora Williams, Greensburg Club President for the 2019-2020 Rotary year, recapped the year by discussing a few of the highlights and achievements. Those achievements include the installation of seven new Rotarians throughout the year. In the Southern Indiana Rotary District #6580, Greensburg is just one of nine clubs out of 28 clubs with positive new member growth.

Other achievements include the successful annual Euchre Tournament which benefits Decatur County Special Olympics, the publication of the Greensburg Rotary Club 100th Anniversary memorial book, the successful efforts to hold meetings virtually due to the COVID-19 pandemic, the Club being presented with a District Governor Citation for achieving its goals for the year, the presentation of the Avenues of Service Award to Past District Governor Jerry Fox for his long commitment to ending Polio, and one of the largest achievements in its 100 year existence, the successful installation of the new Centennial Park electronic sign at the corner of Lincoln and Main streets near downtown Greensburg. The sign was paid for thanks to the efforts of Rotary Club members. No taxpayer money was involved in the construction and placement of the sign.

President Lora assisted Rotary Foundation Chair Larry and Bev Moore with the presentation of Paul Harris Fellow Awards to members of the club, which include Courtney Crowe, Kelby Owens, Jenni Hanna, Nathan Vandrey, Dr. Mathew Gauck, Eric Raver and Doug Westerfeld. Also receiving a PHF award were multiple award winner Mandy Lohrum who received her seventh award with three of those awards being presented for her husband Micah, daughter Mackenzie and son Mason, while Jeff Emsweller received his second award. The Paul Harris Fellow Award recognizes individuals who have contributed $1,000 or more to the Rotary Foundation and is named after Rotary Founder Paul Harris.

Likewise, the Greensburg Rotary Club presents Paul Harris Fellow Awards to deserving community members who are not Rotarians. Receiving awards at the ceremony on Monday were Rob Duckworth and Dick Reed.

Rob Duckworth served as the director of the Decatur County Emergency Management Agency until February 2018 where he accepted a position as the school resource officer for Decatur County Schools. Rob now works as the Director of Traffic Safety for the Indiana Criminal Justice Institute. Rob was recognized for his efforts in working with local authorities which resulted in the expansion of the Emergency Management Operations Center in Decatur County. Those efforts lead to improved technology needed to help in coordinating emergency responses during disasters, converting the former library mobile bookmobile into a mobile command center, assisting in establishing a CERT (Community Emergency Response Team) in the county and establishing the Nixel text alert system for use in the county. During Rob’s tenure as EMA Director, the county received more than $2.3 million in state, local and federal grants.

The second Community Paul Harris Fellow Award was presented to Dick Reed of Kova Fertilizer. Dick has never been an official Rotarian but has followed the standards set forth by Rotary International throughout his entire life. His actions follow closely in the footsteps of Founder Paul Harris, preferring to stay out of the spotlight and forgo public recognition. Dick helped bring many new technologies, products, and employees in the Decatur County community. He has served as the Decatur County Fair Board President and on the Indiana State Fair Board. In the early 1960s, Dick helped establish the Indiana Plant Food and Agrichemicals Association and served on the first board of directors and as the organization’s third President. His achievements are many.

Also, a Paul Harris Fellow presentation was made to Decatur County Memorial Hospital CEO Rex McKinney and other leaders for their corporate sponsorship of the Greensburg Rotary Club.

Rotarian Barb Jakad was presented with a special President’s award for her continued dedication as the Club Secretary and weekly newsletter publisher.

Mandy Lohrum also received the Jack Hurst Award, which is the Rotarian of the Year Award. Jack Hurst was a longtime member of the club, dedicated, and never having missed a meeting in all his years as a Rotarian.

The evening concluded by President Lora turning the gavel over to 2020-2021 President Tami Wenning. Tami is the Executive Director of the Decatur County Community Foundation. Greensburg Rotarians thanked Lora Williams for her successful and courageous leadership during an unusual year marred by COVID-19 and the club looks forward to the 100th Anniversary Celebration Party in the future.