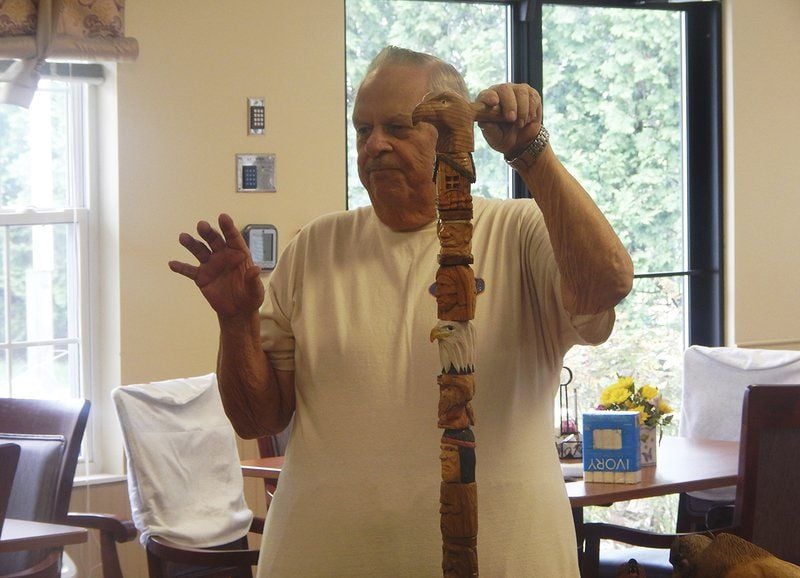 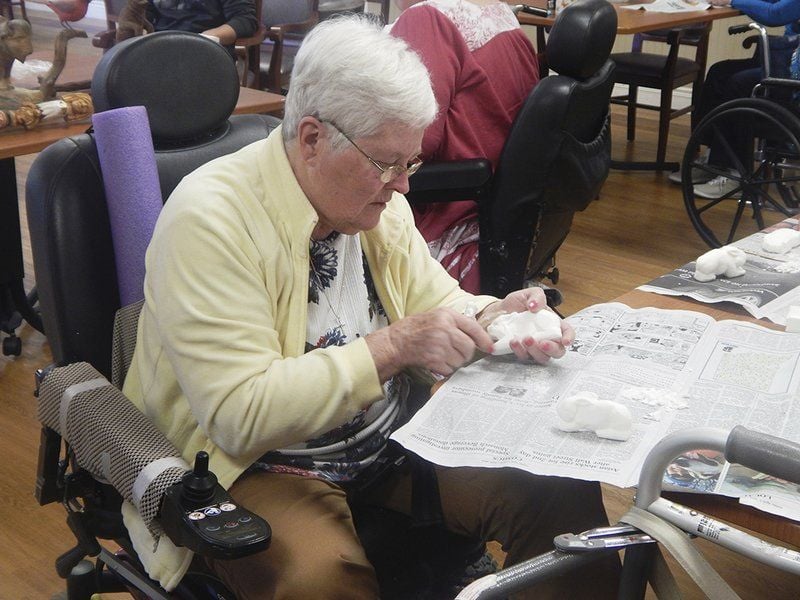 On Monday, April 4, Morgan taught his first wood carving class at Morning Breeze Retirement Community and Healthcare Center in Greensburg and presented many of his completed projects to attendees, including a cardinal, a wolf and a friendship cane carved by fellow wood carvers.

Activity Director Angie Gehrich first learned about Morgan’s skill after seeing the intricate details in his friendship cane one day while having a conversation. After asking him about it, she found that it allowed Morgan to have a pastime, but more importantly, was something he -- and others -- can enjoy.

“We do arts and crafts, but we never do anything like this,” Gehrich said. “They (residents) really enjoyed it and they were amazed at how intricate the teeth on the wolf were, and they really liked the friendship cane.”

Although community members participate in other classes, Gehrich said activities like the new wood carving class is important to residents.

“It just gives them an opportunity to experience something new,” Gehrich said.

Being a beginner’s class, Morgan and Morning Breeze provided bars of soap to help residents practice their carving skills. Beforehand, Morgan carved one side of the bar of soap in the shape of a rabbit, prompting fellow community members to create a mirror image on the opposite side.

For Morgan, carving is a wonderful stress reliever and he says it can be for everyone else, as well.

“It really works well for that (stress reliever),” Morgan said. “You can get a block of wood and just start carving and forget about everything else.”

Morgan, a Michigan native, also dedicates much of his time working alongside the Michigan Wood Carvers Association’s Lean-On-Me project carving useable, yet decorative canes for World War II veterans. Morgan’s job is to construct the head of an eagle that will be placed at the top of the cane before someone else inscribes the recipient’s military credentials along its base. According to the Michigan Wood Carvers Association’s statistics, they’ve created over 2,800 canes for veterans.

After 22 years, Morgan said he still spends time everyday working at his craft. Not only is it enjoyable, but it can help with mobility and even health.

“It’s just a lot of fun and it relaxes you and it also keeps your mobile skills working,” Morgan said. You get so immobile from not using your hands enough and uncle arthritis catches up on you.”

As for future classes, Morgan says he’d like to teach more down the road, perhaps with the hope that the art that found him can find someone else.