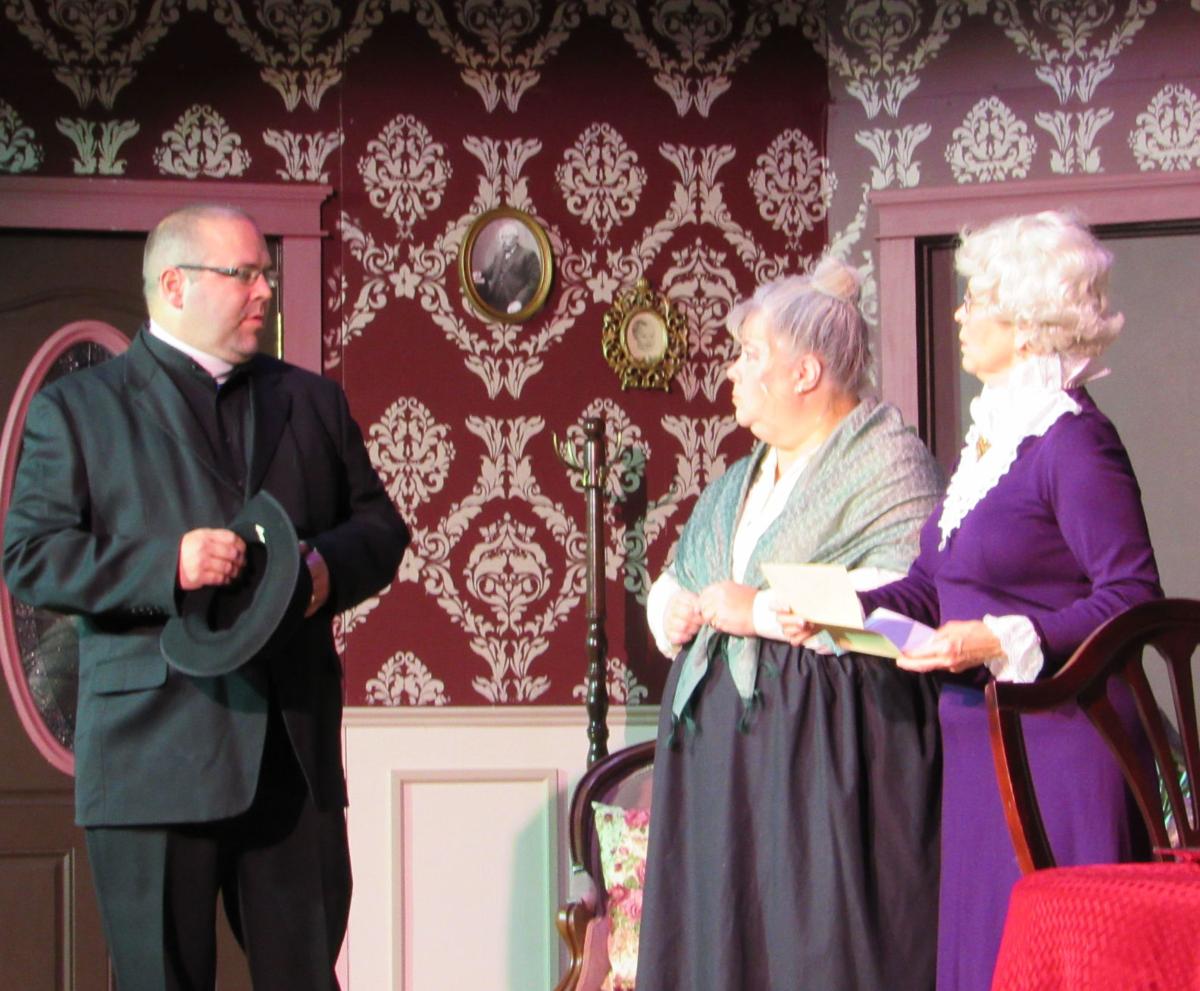 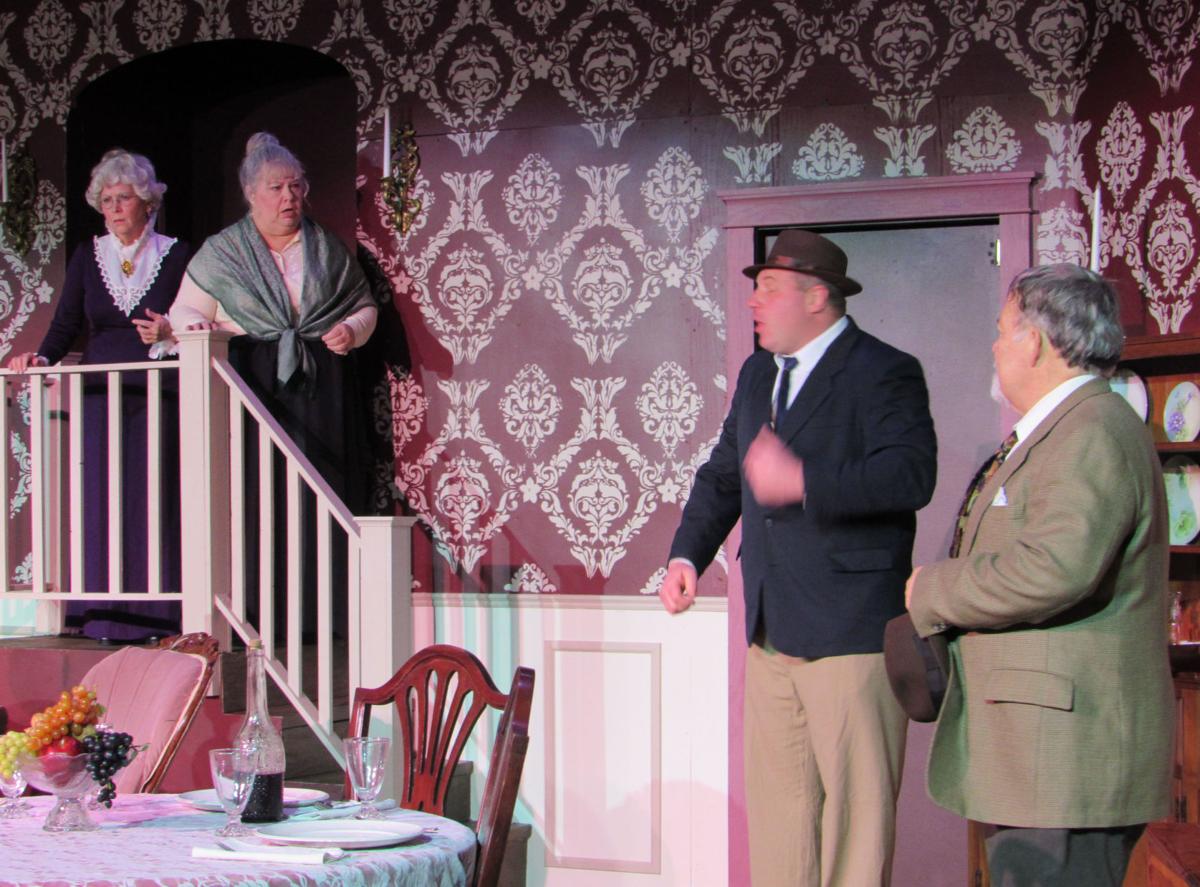 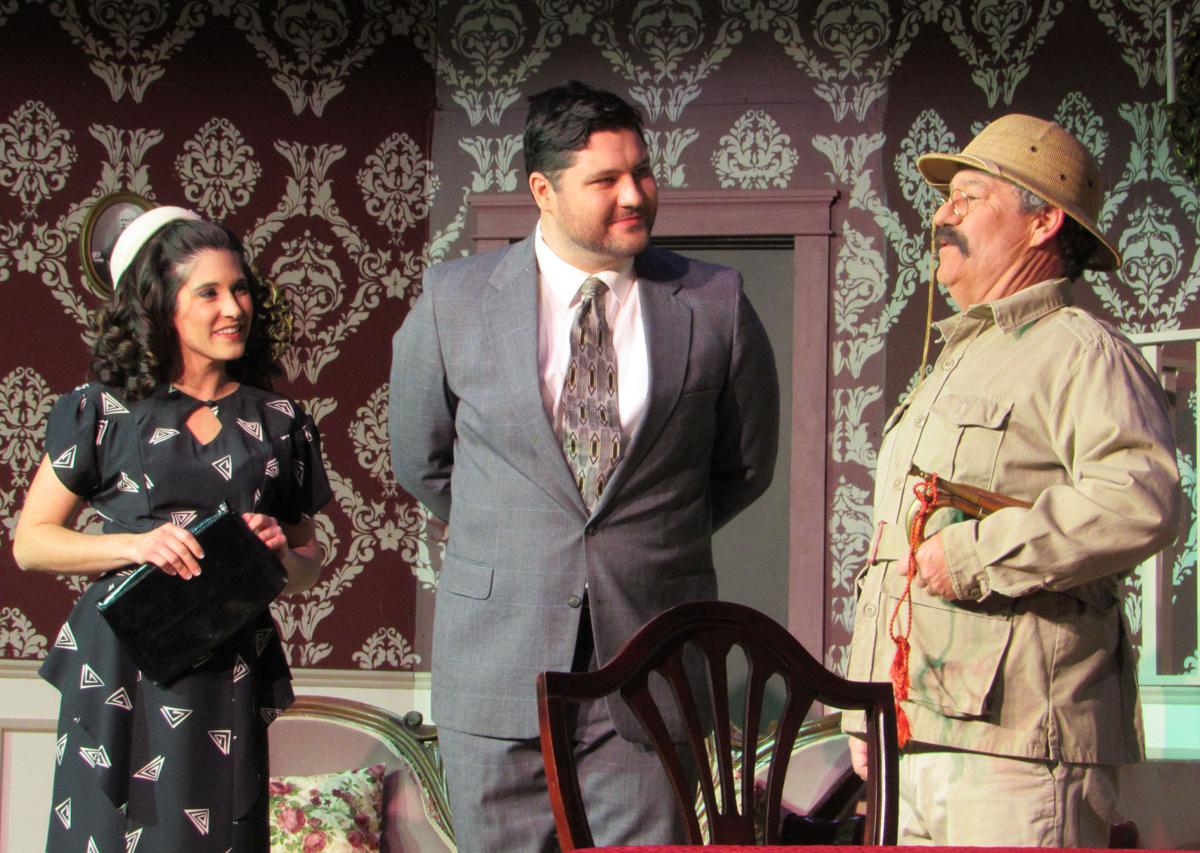 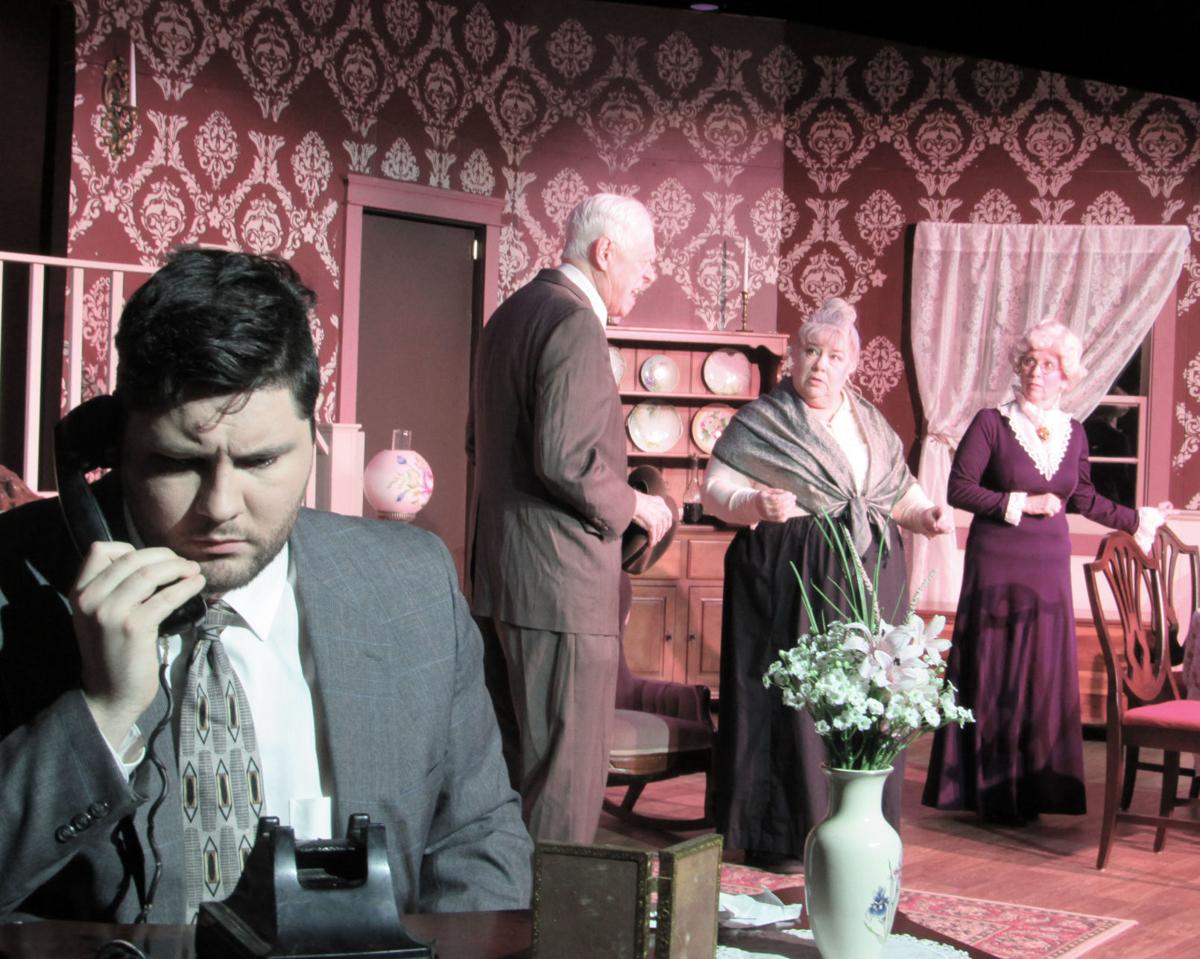 Mortimer Brewster (Conlin Durbin) begs his boss to find a substitute to review this evening’s play, while his crazy aunts Abby and Martha (Cathy Lincourt and Nancy Porter) “interview” Mr. Gibbs (Jim Powell) as a perspective renter in “Arsenic and Old Lace.”

Mortimer Brewster (Conlin Durbin) begs his boss to find a substitute to review this evening’s play, while his crazy aunts Abby and Martha (Cathy Lincourt and Nancy Porter) “interview” Mr. Gibbs (Jim Powell) as a perspective renter in “Arsenic and Old Lace.”

GREENSBURG — Taking Greensburg’s celebrated local theater group to new comedic heights, the classic “Arsenic and Old Lace” opens at the TCP Playhouse at 7 p.m. Friday, Jan. 24. The show also is being presented at 7 p.m. Saturday and 2 p.m. Sunday at the playhouse on W. Main Street.

One of a few plays Tree County Players has staged more than once (the first being in the 1973-1974 season), it is nice to see a new group of younger players tackling a theater classic and creating such an enjoyable evening for modern audiences.

Considered one of the true theater “dark comedy” classics, the production tells its hilarious tale over three acts with the entire show taking place in the 1940s living room of the Brewster home in Brooklyn. The 1944 film of the same name was directed by Frank Capra (“It’s a Wonderful Life) and starred Jean Adair and Josephine Hull as the spinster sisters with Cary Grant as Mortimer; it was a box office hit.

Mortimer Brewster (played by Conlin Durbin) is living a happy life. He has a steady job with a prominent New York newspaper and has just become engaged to the lovely Elaine Harper, played by Karen Matthews. Brewster visits his sweet spinster aunts Abby and Martha Brewster to announce the engagement. The Brewster sisters are played by Cathy Lincourt and Nancy Porter respectively, and if there’s ever a reason to see a play, watching these two portray slightly insane but still blithely charming kooks is it!

Mortimer always knew (and as the humor unfolds, the audience learns as well) that his entire family has a bit of a mad gene. Mortimer’s brother, Teddy Brewster, believes himself to be Teddy Roosevelt, and the cast discusses how his great-grandfather used to scalp Indians for pleasure.

As if that pedigree wasn’t enough to cause one just a wee bit of anxiety, he learns early in Act 1 that his dear aunts have been poisoning lonely old men for years!

When Mortimer’s maniacal brother Jonathan (played by Bob Eisert) returns on the night that the aunts were planning to bury their newest victim, Mortimer must rally to help his aunts and protect his fiancé – all while trying to keep his own sanity.

The audience is introduced to a host of many other colorful characters that contribute to the hilarious slapstick that doesn’t stop until the final word in Act. 3.

It’s always interesting to see how the group uses the relatively small stage at the local playhouse to their advantage, whatever production is currently “on the boards.”

In their short tenure there thus far, TCP’s audiences have already seen the relatively small performance space transformed into a cozy winter cabin, a “high-in-the-Smoky Mountains” Baptist Church, the rooms in and around an ancient Italian church courtyard, and a hip city night club. Now, Prairie and Lincourt have turned it into a very convincing likeness of the 1940s drawing room of two quite crazed Boston spinsters. And Jeff Lincourt serves double-duty in this play: he is on stage as Dr. Einstein as well!

And the wall paper for this set? It’s been tirelessly hand-stenciled by Prairie. And the set doors come complete with crown pediments. Bravo, team! Bravo!

“This cast has been great. It [casting] was a bit difficult at first, because out of the 14 roles 11 are male, and getting males in community theater is always a bit difficult. So, I asked around. Several cast members gave me numbers and I started reaching out by phone and by Facebook. I ended up with a few cast members for which this is their first time ever on stage. So that’s been a fun part of the process,” said Gault.

Gault said that some of the cast hasn’t been on stage since their high school years, so the experience levels of those involved are anywhere from “experienced super actors” to “actors in training.”

“They’ve helped each other at every practice, they’ve been so great to one another,” she said.

Gault directed this show three years ago at South Decatur High School, and as a TCP board member was asked to bring the production to the community theater stage.

“There are a lot of similarities between the two, but this set is really amazing, and Natalie Smiley is my costumer at South Decatur so I brought her with me,” she said.

Gault attributes the success of the finished production to the teamwork of the cast and crew.

Durbin (Mortimer) lives in Indianapolis and traveled back and forth every day to rehearsal.

“[This] was one role we could not fill, regardless of who we asked, so during the first read-through Sean Durbin (Teddy) asked if he could ask his son,” Gault said. “And Conlin said, ‘I think I’m interested!’ He’s been great!”

Gault allowed her cast members free reign to create their roles as they saw fit. She was especially pleased with the Dr. Einstein character played by Jeff Lincourt.

“He came up with that character completely on his own, and he’s very funny. I love it,” Gault said.

Nancy Porter answered questions about her role in the play as her character (Martha). She said (in Martha’s voice), “We have nephews that we love dearly. One is Teddy and he lives with us. We have a little secret that his brother Mortimer finds out about, but ... well, that’s the play!”

Porter also shared her thoughts about being involved with this production.

“It’s so much fun, and really energizing when we’re with the other cast members. There’s so much energy, and they’re just all so good. It’s been fun to be on stage with each of them. They’re a very talented group,” she said.

Tickets for “Arsenic and Old Lace” are available by visiting www.treecountyplayers.com and following the links, or by calling the reservations line at 812-222-4766.