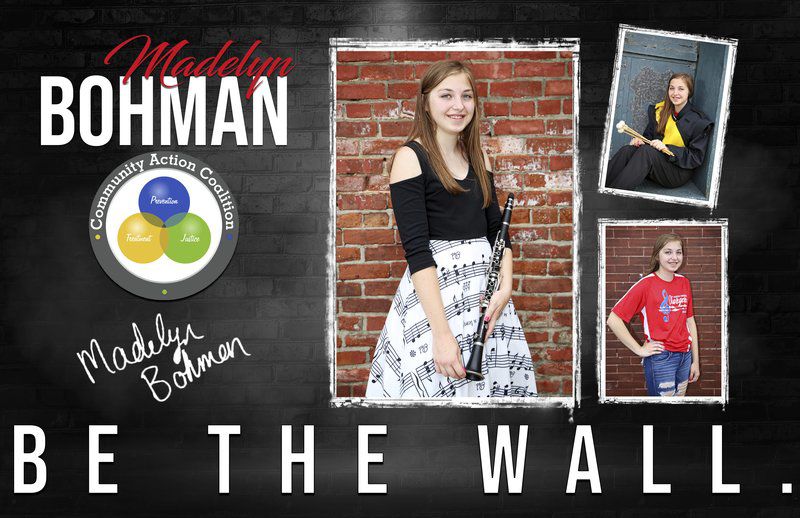 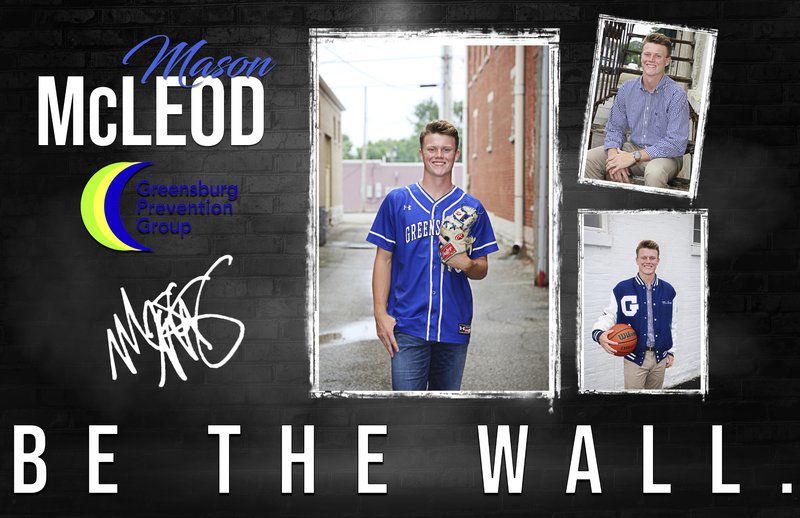 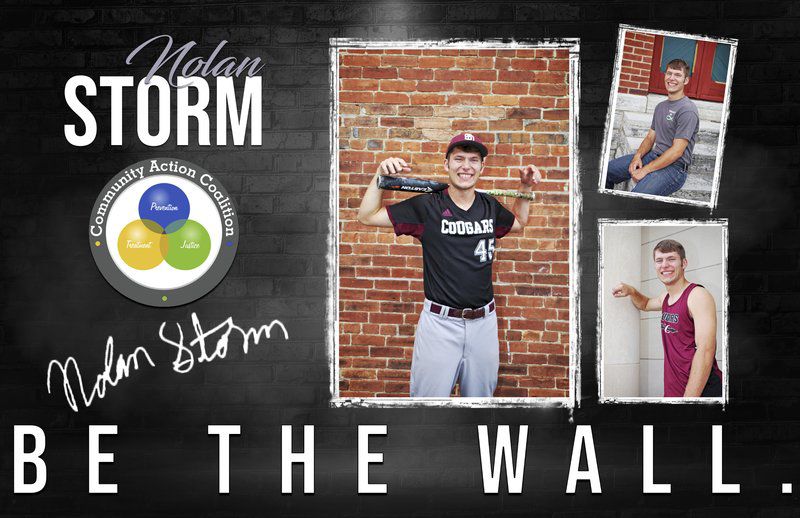 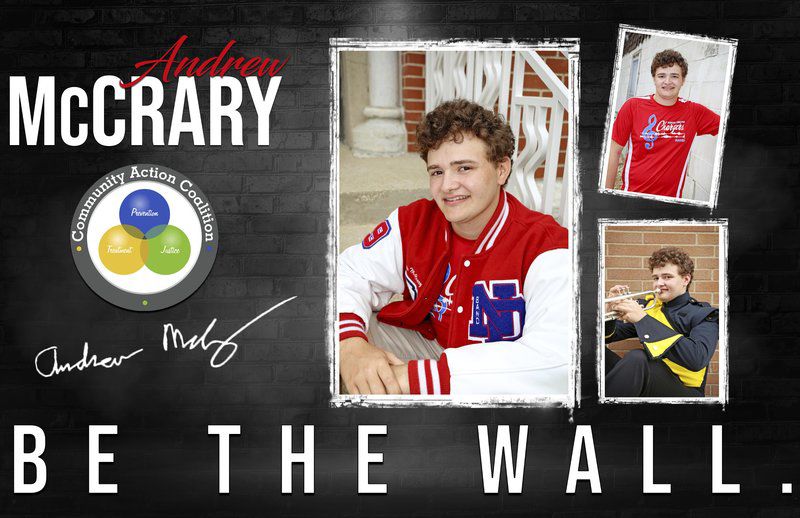 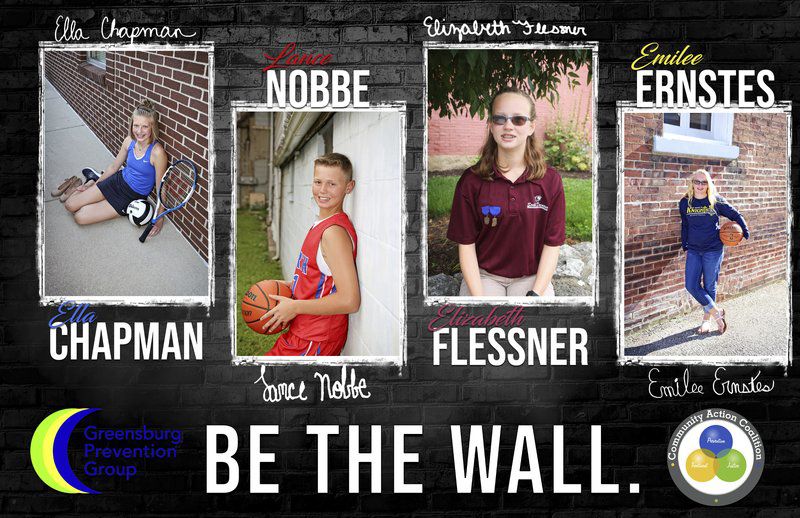 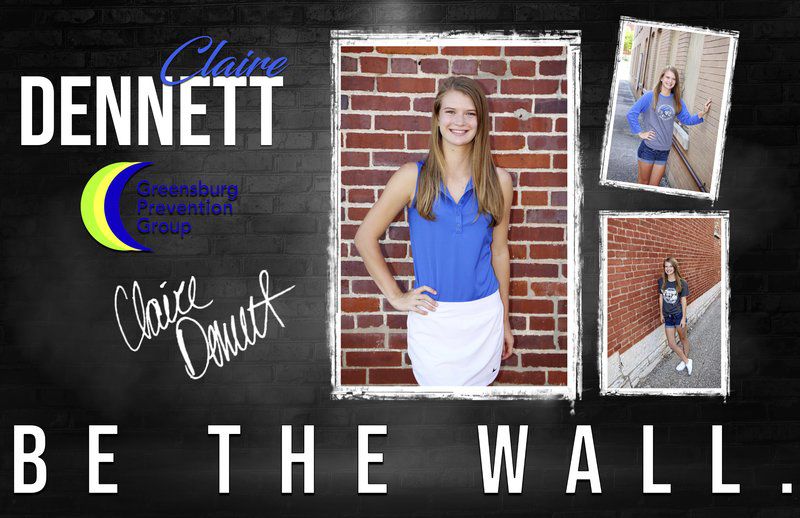 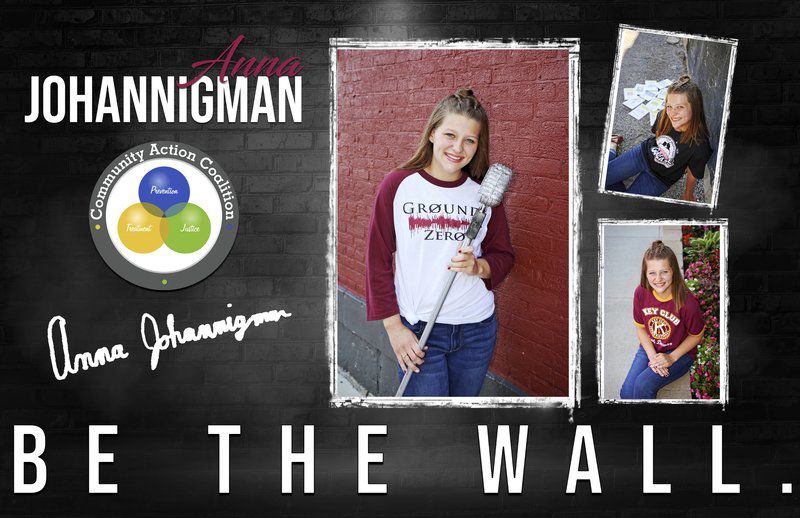 GREENSBURG — The youth of Decatur County has a new group of role models standing up to “Be the Wall” between a healthy lifestyle and drugs or other destructive decisions.

Each of the role models is featured on a poster, which is then distributed throughout the community. The seniors are also awarded a $200 scholarship toward their first semester of college.

To qualify for the honor, students must be in good academic standing, be involved in extracurricular activities, be willing to sign a pledge promising to make healthy choices and live alcohol, tobacco, and drug free, be willing to serve on their school’s substance abuse prevention group, and be willing to act as a liaison between their school and the CAC/GPG.

For their essays, students had to write about what being a role model meant to them.

Ella Chapman of Greensburg Junior High is the daughter of Chris and Brenda Chapman.

“A great role model to me is a person that always has a smile on their face, never gives us, learns from their mistakes and always has a positive impact on everyone,” Ella wrote in her essay.

Lance Nobbe of North Decatur Junior High is the son of Kyla and Nyoka Nobbe.

“My role model is Carten Johnson,” Lance wrote. “Carter is a kindergartner who has battled cancer in his early years of living. His bravery and willingness to overcome cancer at such a young age is remarkable.”

Elizabeth Flessner of South Decatur Junior High is the daughter of Matt and Pam Flessner.

“My role models are my parents and my teachers. I chose these people as my role model because they are educated leaders who do what is right,” Elizabeth wrote.

Emilee Ernstes is the daughter of Vince Ernstes and Jennifer Hall.

“I am a very good, responsible, kind, caring, and hardworking role model to my peers and to my little siblings,” Emilee wrote. “I am a role model because I am hardworking. I have worked and am still working to become who God has me set to be.

At the high school level, male and female seniors were chosen from Greensburg, North Decatur, and South Decatur.

Claire Dennett of GCHS is the daughter of Scott and Andrea Dennett.

“To me, the actions of a role model can be similar to the game of golf,” Claire wrote in her essay. “You can’t just grab your clubs from the dusty corner of the garage one day and expect to play like a professional golfer, just as you can’t expect to pick a role model right off the street. Like the game of golf, being a role model takes daily awareness, honesty, integrity, and practice fine-tuning those qualities.”

Mason McLeod of GCHS is the son of Jeff and Shannon McLeod.

“Being a role model is a hard thing to accomplish in today’s world. With so many influences that contribute to getting involved with factors that could negatively affect one’s life, at times it can be hard to stay focused,” Mason wrote. “Commitment, confidence, and courtesy are all traits of an ideal role model to me.”

Madelyn Bohman of NDHS is the daughter of Maurice and Wendy Bohman.

“A role model is someone who shapes your character and shows you how to be the best version of yourself,” Madelyn wrote. “Someone that you can always go to for advice and will never judge you on things you did in the past. For me, this person is my mother.”

Andrew McCrary of NDHS is the son of Richard and Lorie McCrary.

“Role models are needed while growing up, especially early in life, to ensure we behave like we should when we grow older and more mature,” Andrew wrote. “We use role models to find inspiration and create an outlook for how we will act.”

“When I think of a role model, I think of someone who inspires respect, who makes good decisions, and who truly works at everything he/she does,” Anna wrote. “To be a role model, people don’t only have to look good on the outside, they must live a substance-free life. This is why ‘I am the Wall’ is a very important campaign because it shows students someone who pledges to be drug-free.”

Nolan Storm of SDHS is the son of Joseph and Sandra Storm.

“Legendary figures such as George Washington, Nelson Mandela, and Martin Luther King Jr. will forever go down in history as extraordinary people that made the impossible possible,” Nolan wrote. “Through their grit and determination, they worked to accomplish a greater goal that all true role models share, to stand up for the right thing. While this motive may seem general and cliché to some, I feel that it is a necessary leadership trait that has become fairly difficult to come by in our modern society.”

Look for these students’ Be the Wall posters up around town. For all those struggling to make healthy decisions, there is a new group of kids in town working to help lead the way.

For more information about the groups working to prevent alcohol and substance abuse in Greensburg, visit the “Greensburg Prevention Group” Facebook page or greensburgprevention.org.

For the same information on a county-wide scale, visit the “Community Action Coalition” Facebook page.