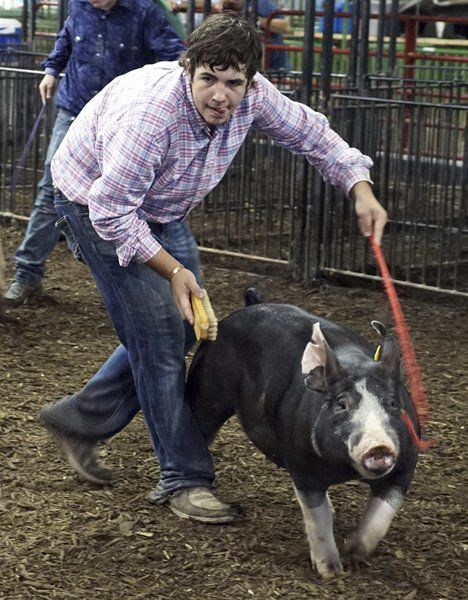 Photo by Nils Parnell | Mason Swartzentruber marches his way toward a grand championship in the Gilts category with a Berkshire. 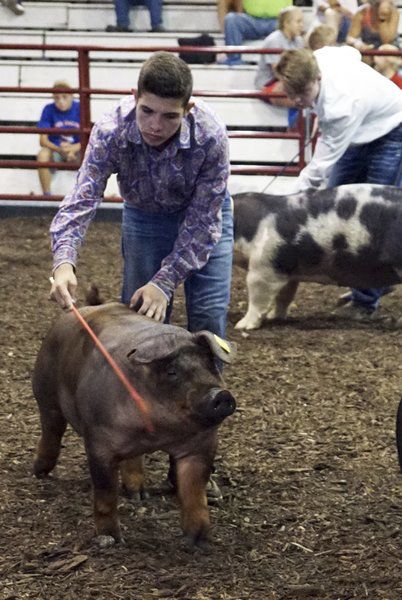 Photo by Nils Parnell | Landon Swartzentruber took home the grand champion in the Barrows category with a Duroc Wednesday night.

Photo by Nils Parnell | Mason Swartzentruber marches his way toward a grand championship in the Gilts category with a Berkshire.

Photo by Nils Parnell | Landon Swartzentruber took home the grand champion in the Barrows category with a Duroc Wednesday night.

GREENSBURG – You could say being a grand champion runs in the Swartzentruber family.

Mason received grand champion in the Gilts category with a Berkshire.

The older brother attributes the majority of their success to hard work and working together as a family.

“Normally, at home, we just try and work and do whatever it takes to win,” Mason said. “We work as a family, we win together. If you want to have success, you have to help each other out. I mean, I didn’t come into this thinking I was going to win, but it panned out. If you work and dedicate yourself, you can do anything.”

Mason said the work that goes into this includes, but is not limited to, two walks per day, sun tanning hogs in the sun 30 minutes per day, feeding twice per day, which he said comes to a total of around 4-5 hours per day of work.

He added that work is just for swine and does not include the work with other animals.

“It means everything,” Mason said. “We do this together as a family year-round. We show in at least 10 different states. It’s our passion.”

Landon, who took home grand champion in the Barrows category with a Duroc, explained the work that goes into making this possible.

While he and his brother have both acknowledged the amount of work that goes into this, they still find it all enjoyable.

“At the county level, it’s not easy but it’s really still fun and competitive,” Landon said.

The boys’ father, Trent, said he was proud and spoke about how this was all a result hard work and of their year-round effort raising swine.

“It’s fruits of their labor,” Trent said. “There are a lot of kids here that work hard. It takes a little luck, hard work first, a little luck, and we came out on top today.

“It was a proud dad moment. A lot of time, a lot of heart and a lot of effort [goes into this]. For breeders, it’s a year-round project. You breed them in the fall in August or September, the babies are born in December or January, and you show in the spring and summer. After show season is over, breeding season starts.”

Mason and Landon’s mother, Kristie, celebrated her birthday Wednesday, which was topped off with her two sons’ successes.

“Not only is it luck, but I see them work hard at home, so the payoff is wonderful to see that their late nights and early mornings pay off,” Kristie said. “They’re out there every day and every night. I think they came in last night at 1:30 in the morning. It’s multiple nights of that that they’re out there.”

At the end of the day, the Swartzentrubers have seen, firsthand, what hard work produces. From their mother’s perspective it makes her smile.

Look for more stories from the Decatur County 4-H Fair in upcoming editions of the Daily News.