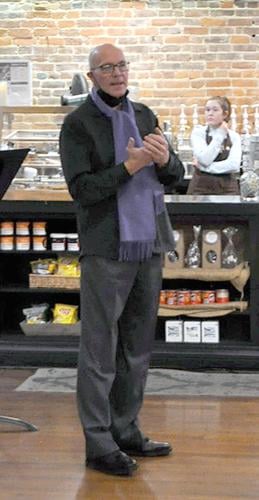 President of Amack’s Board, Jeff Gratz, leads the presentation at Tuesday’s event. 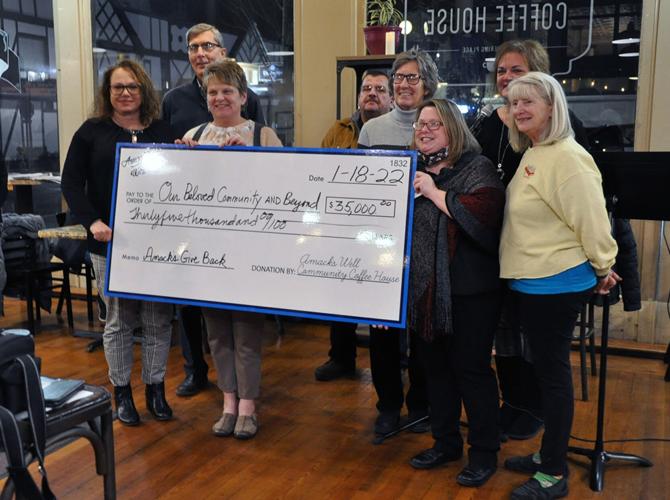 Leaders of each organization awarded funds are presented with a symbolic check for the full amount of this year’s Giveback Campaign.

President of Amack’s Board, Jeff Gratz, leads the presentation at Tuesday’s event.

Leaders of each organization awarded funds are presented with a symbolic check for the full amount of this year’s Giveback Campaign.

BATESVILLE — Amack’s Well recently hosted its annual Give Back presentation in the coffee shop, and $35,000 was given back to the community by the nonprofit.

Jeff Gratz, President of the Amack’s Well’s Board, presented the mission statement which states the purpose of the shop is to provide a safe community gathering place for all age groups, foster a sense of community, promote the arts and demonstrate love for our neighbors.

That mission is met by Amack’s General Manager Stephanie Roark and Business Manager Joan Kuhlman, who maintain the success of the business in its day-to-day operations. At Tuesday’s event, Kuhlman’s retirement was announced and her tenure was celebrated.

The contributions awarded were presented in the following order:

$1,500 was awarded to Batesville Community Garden and accepted by Cindy Weisenbach. The funds will be used to purchase more garden beds in the hope to benefit the Weekend Backpack Program by adding fresh fruits and vegetables to that program.

$1,500 was awarded to the Batesville Historical Society and accepted by Carolyn Dieckmann. The funds will be used to replace the organization’s computer, which was recently hacked.

$3,000 was awarded to Greensburg Meals on Wheels and accepted by Diana Robbins. The funds will be used to meet the difference between the average cost of a meal, $6.50, and the cost they ask the clients to pay, which is $2.40.

$3,000 was awarded to So Loved Closet and accepted by Jamie Nobbe. The funds will be used to benefit children of Ripley, Decatur, Jefferson, Dearborn, Franklin and Switzerland counties by helping So Loved Closet find a new, larger space for their organization.

$3,000 was awarded to Phi Beta Si and accepted by Chris Fairchild. The funds will assist local cancer patients, fund scholarships and support civic organizations throughout the area.

$3,000 was awarded to CASA, Voices for Children Ripley County and accepted by Melissa Herzner. The funds will help replace their computer system and help children in the local community.

$7,500 was awarded to Southeastern Indiana Health Clinic and accepted by Dr. Stephen Glaser. The funds will help their mobile health clinic offer medical care in Metamora, Versailles, Laurel and Milan.

$7,500 was awarded to the VFW Batesville Post 3183 for the Veteran’s Relief Fund and accepted by Post Commander Tom Fritch. The funds will benefit local veterans and those who are passing through the area and need some form of assistance.

An additional $5,000 was donated to the Kentucky Tornado Disaster Relief Fund to help those whose homes were lost in the recent natural disaster.

The Giveback Campaign began in 2016 after Amack’s Well’s first year of business. The charitable donations have increased annually.

Previously, board member and founder Roberta Cook told the Daily News that in the shop’s early years the giveback was limited so that it was fiscally responsible. As the shop has thrived, the giveback has increased and this year is the largest designation since their conception.

In the past, Amack’s Well has contributed to Safe Passage, Voices for Children, and the SEI Health Center and Genesis, to name a few. They’ve helped countless individuals and families as well, but respect their privacy in their time of need and as private citizens.

The minimum donation through the Giveback Campaign is $250 and the maximum so far has been $7,500.

Recipients are chosen after submitting an application to the coffee shop. Last year was the first year that the application was made public via social media. Previously, the belief was that since the guests of Amack’s Well were responsible for the financial success of the shop and the viability of the Giveback Campaign, then those are the people who should benefit and/or help choose those who benefit from the campaign.

Philip Monroe Hellmich, age 60, the son of Richard and Phyllis Hellmich, passed away Friday, April 1, 2022. A visitation for family and friends will be held at Gilliland-Howe Funeral Home on Thursday, May 19, 2022, from 8:00 am until the time of the memorial service at 10:00 am, and will be …