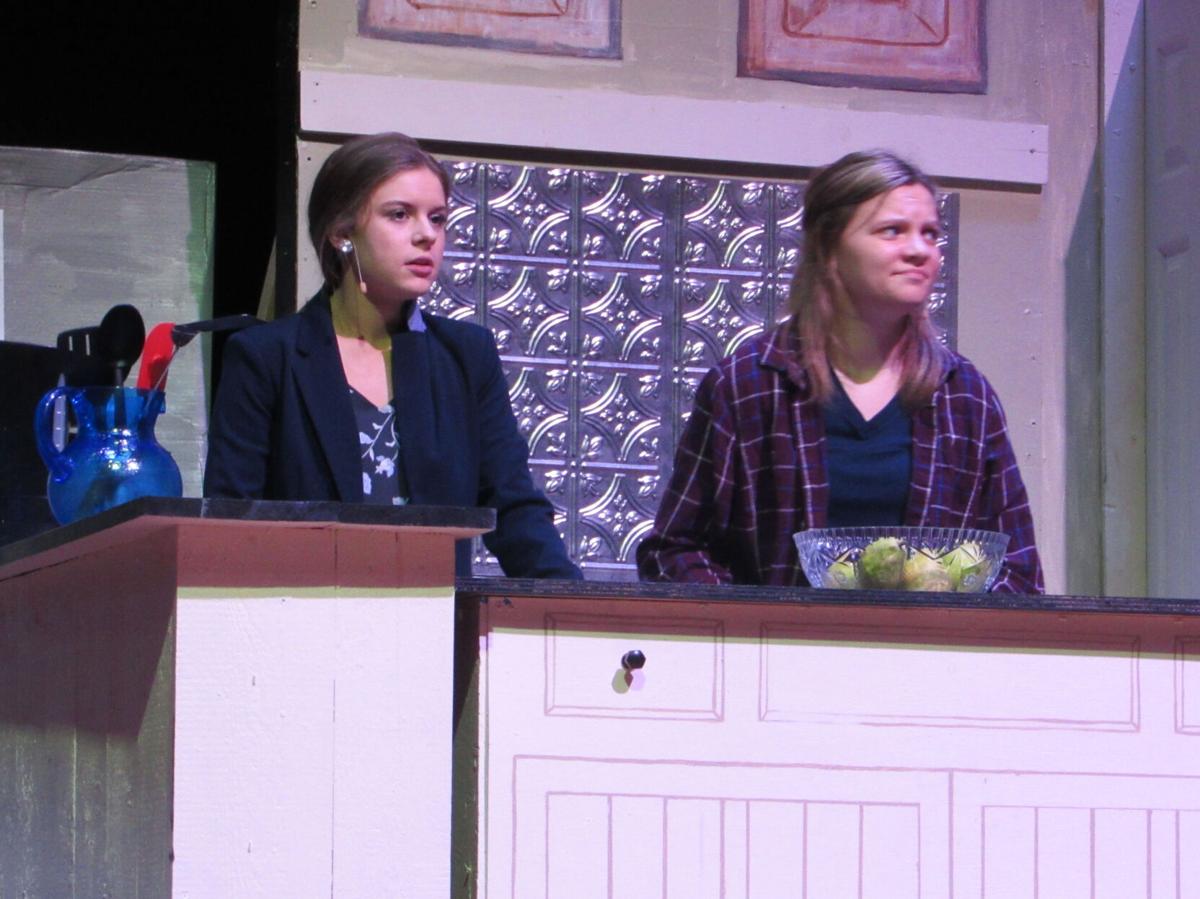 The entire cast of "Freaky Friday" (and a few surprise guests) take the stage in "Somebody Has Got to Take the Blame." The show opens Friday GCHS' Goddard Auditorium. 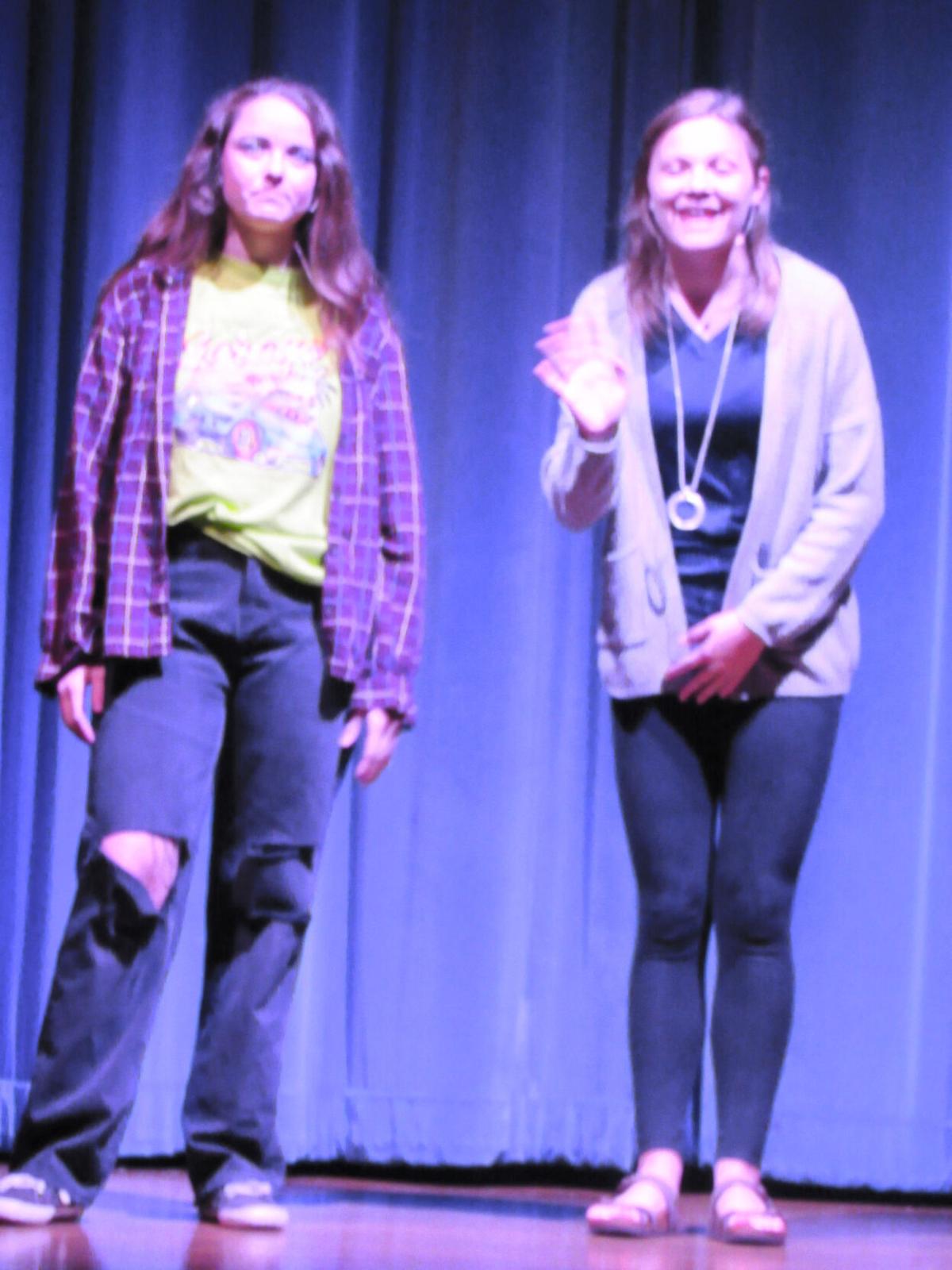 Daughter Ellie Blake (Kaelyn Spears, left) and mother Katherin Blake (Kylee Simpson) discuss a list of their least favorite attributes of each other in the GCHS Choral Department production “Freaky Friday” opening this weekend at the GCHS Auditorium.

The entire cast of "Freaky Friday" (and a few surprise guests) take the stage in "Somebody Has Got to Take the Blame." The show opens Friday GCHS' Goddard Auditorium.

Daughter Ellie Blake (Kaelyn Spears, left) and mother Katherin Blake (Kylee Simpson) discuss a list of their least favorite attributes of each other in the GCHS Choral Department production “Freaky Friday” opening this weekend at the GCHS Auditorium.

GREENSBURG — “Freaky Friday” opens this weekend in Greensburg Community High School’s Goddard Auditorium, and if it wasn’t the first live theater production for Greensburg audiences since the onset of COVID-19 it would still be the best bet for the entertainment dollar to come around in way too long.

“We cast this show in 2020. We were supposed to do it in May of last year, but after we cast it everything shut down,” said Director and GCHS Choir Director Heather Simpson. “Technically, we’ve been rehearsing this on and off for a year!”

A group of disappointed kids (minus a few who graduated and had to be recast) has never composed such a hilarious and meaningful stage musical in Decatur County’s history.

“With all that’s gone on in the last year, I’ve had to replace a few who either graduated or left the production, but yes, they know the show really, really well,” said Simpson.

“Freaky Friday” is just one of a string of popular musicals that are rewrites of classic movies, and originally books turned into movies.

The two-act show runs about an hour and a half and follows teenager Ellie Blake (played deftly by Kaelyn Spears) and her mother, Katherine (Kylee Simpson), on the weirdest, strangest, craziest, freakiest day of their whole lives.

Try as they might, Katherine and Ellie just can’t seem to understand each other. Ellie wants her mom to stop trying to change her while Katherine wants her daughter to be the best version of herself that she can be.

On a fateful Friday, the day before Katherine’s wedding, something magical occurs when mother and daughter swap bodies. Now, both will have to spend a day walking in each other’s shoes, learning about each other and the struggles each goes through, and forging a new mother-daughter relationship.

Never mind the message, the classic story about a tumultuous relationship between mother and daughter, but the production is just well done. And with real teachers from the local school systems playing surprise bit parts, fun is guaranteed for all.

A few of the many performances to note are the leads, Ellie and Katherine Blake .

Did I mention Kaelyn Spears can really sing?

Her natural voice, though it lacks somewhat in power, makes up for it in purity, tonal color and vibrato. Her performance is very easy on the ears and will please the true music lovers in the audience. It also conveys a sense of believable frustration and surprise in reaction to the story’s twisting plot.

Kylee Simpson seems to have an almost natural feel for being on stage. Her characterization seems easy and unaffected and her voice relays her passion for her character and for the plot of the show.

“I’ve learned to be someone totally different than myself, and with all of the little elements about this show – from the special effects to the sets to all the people in the cast who are involved in so many other activities – being patient with others and myself has been an important lesson I’ve learned,” she said.

Director Heather Simpson gave an interesting appraisal of the production.

“My cast and crew are anxious and excited, not only because it’s a stage production but because it’s been 545 days since we’ve had a live show in Decatur County,” she said.

Simpson and crew have had to move some extraordinary mountains to make sure “Freaky Friday” happened.

“I’ve been trying to keep things as normal as possible for the kids because I know that’s what they’ve been craving,” she said. “We’ve been very compliant with all of the CDC guidelines for social distancing and wearing masks, and I know they’re just really anxious to be able to do the show without their masks.”

Safeguards will also be in place for audience members.

“Every other row in the auditorium is taped off. We are limited capacity, but we are a performing group just like a sports team. We are performing without masks, but will be wearing them backstage and before and after the performance,” Simpson said.

Tickets are $10 for adults and $6 for students, with ages 5 and under admitted free. They can be purchased from the GCHS website or at the box office outside the auditorium before the show.

Showtimes are 7 p.m. Friday and Saturday with a 3 p.m. matinee Sunday.