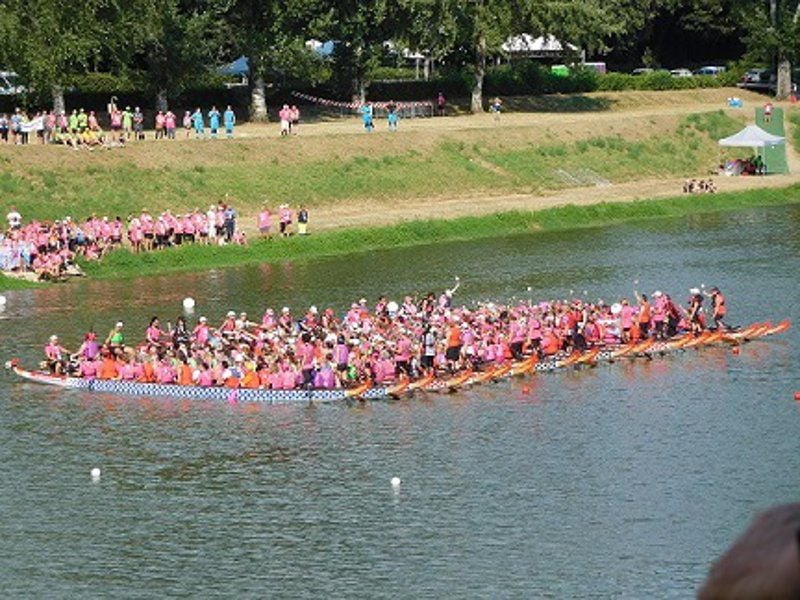 Contributed photoThe dragon boats were linked together for the rose ceremony at the end of the festival, honoring the ladies who have, are, and will fight breast cancer. 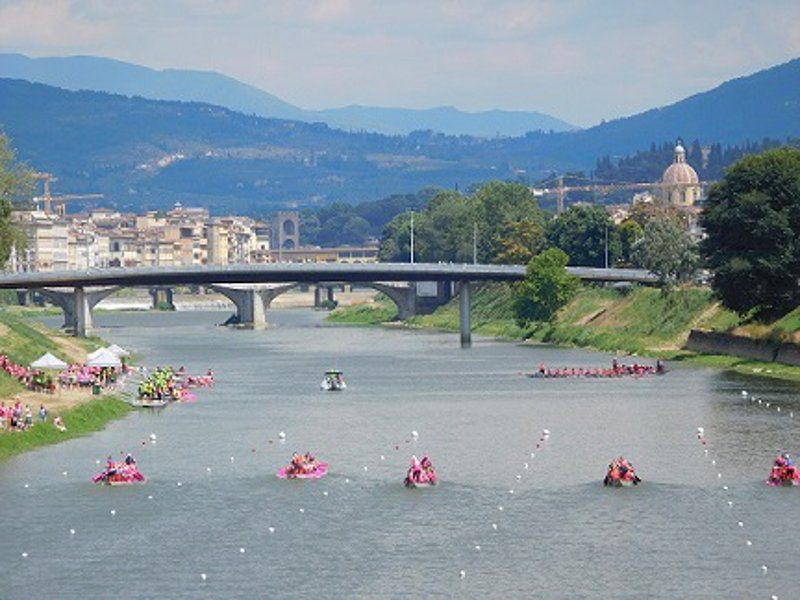 Contributed photo | Teams of 20-22 women paddled the 40-foot dragon boats in heats at the festival. 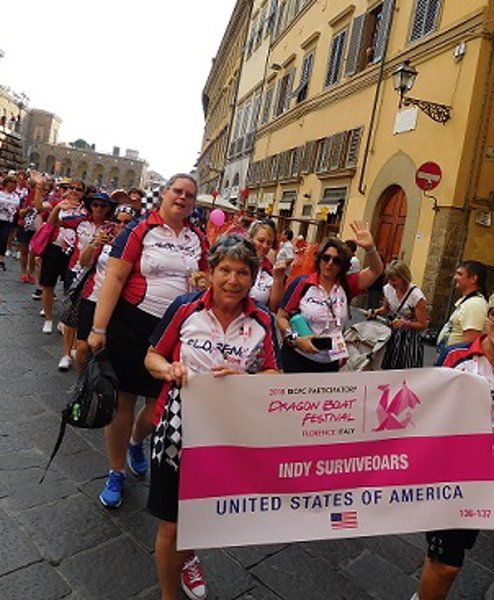 Contributed photoMembers of the IBCPC walked through the streets of Florence in a Parade of Nations representing every continent on the planet. 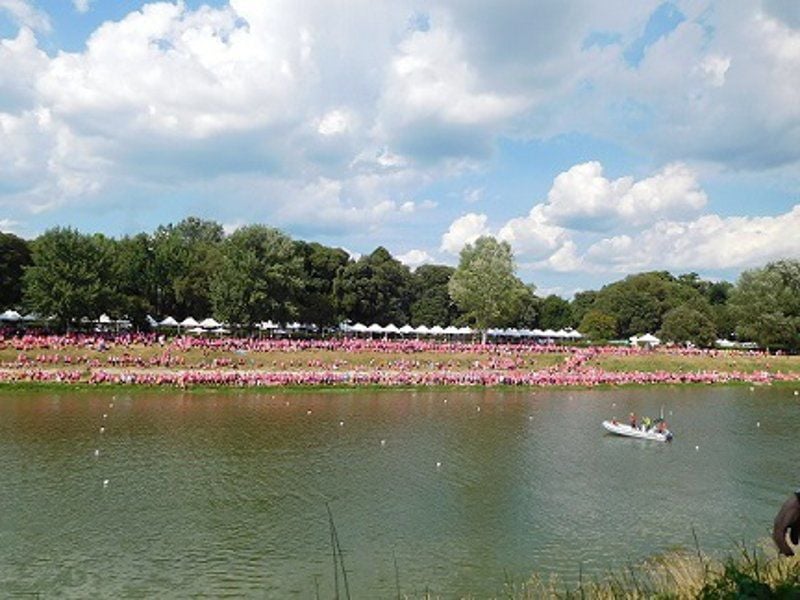 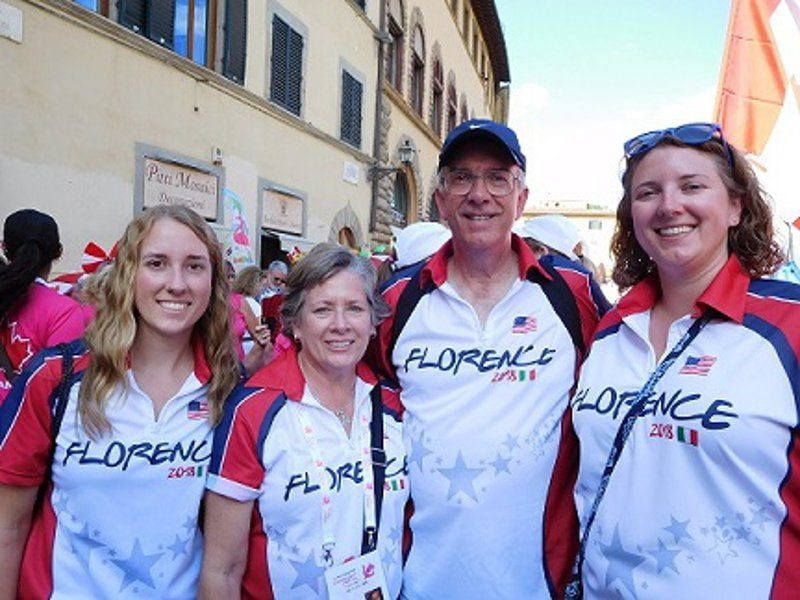 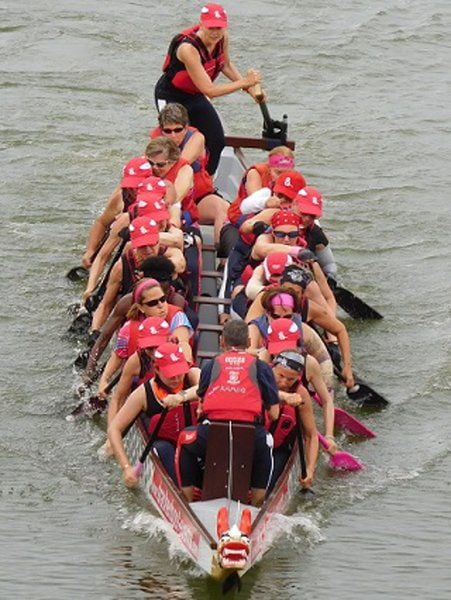 Carol Blankman, second from the back on the left side, paddles in one of her team’s heats at the International Dragon Boat Racing Festival in Florence, Italy.

Contributed photoThe dragon boats were linked together for the rose ceremony at the end of the festival, honoring the ladies who have, are, and will fight breast cancer.

Contributed photo | Teams of 20-22 women paddled the 40-foot dragon boats in heats at the festival.

Contributed photoMembers of the IBCPC walked through the streets of Florence in a Parade of Nations representing every continent on the planet.

Carol Blankman, second from the back on the left side, paddles in one of her team’s heats at the International Dragon Boat Racing Festival in Florence, Italy.

GREENSBURG – While everyone enjoys a vacation, some trips are more meaningful and unique than others.

Blankman’s husband, Bob, and daughters, Lisa and Megan, accompanied her on the trip. Carol is the art teacher at St. Mary’s School and Bob works at RBSK Partners in Greensburg.

The family left Indiana June 30, arriving in Rome July 1, Bob said. The first leg of the Blankmans’ trip was devoted to seeing the sights. In Rome, they ventured out on excursions to the Catacombs, the Vatican and Sistine Chapel, the Colosseum, the Forum, the Spanish steps, the Trevi Fountain, and a side trip to Assisi.

“It was all the things that I’ve studied and they were right there. I could touch them. Well, maybe not the artwork,” Carol said, laughing. “But the Colosseum and things like that. It was an overwhelming experience.”

Bob said they next visited Tuscany for a wine tasting lunch July 4. Their last stop before traveling to Florence for the festival was Sienna, Italy, where they toured many of the medieval brick buildings and plazas for with the city is famous.

While in Florence, one of the highlights for the Blankmans, and especially Carol, was touring art galleries to see the priceless works of art displayed there. Among these was the original statue of David by Michelangelo.

“A trip like this was so meaningful to be able to share with my family. They got to see the art and history I have spent my life studying. Of course, they were aware of it, but to see it in person is a different experience,” Carol said. “And to finish it with the dragon boat race… The celebration for survivors was beyond words – it was priceless.”

Roughly 20 years ago, Canadian sports medicine doctor Don McKenzie introduced dragon boat paddling as one form of surgery rehabilitation, particularly to help with lymphedema following breast cancer surgery. Carol said it has proved helpful as the paddling stretches her arms further than she might on her own.

“It has been very helpful for me because I have lymphedema as well,” Carol said.

The IBCPC consists of 129 teams from 17 countries touching every continent, making this international festival a truly global event. The Dragon Boat Festival was held for breast cancer survivors at Cascine Park, the largest public part in Florence with history dating back to the 16th century. The boat races themselves were held on the Arno River, which runs through the park.

Carol joined a dragon boat team, the Indy SurviveOars, when a friend and fellow breast cancer survivor who was on the team encouraged her to take part. The Indianapolis-based team was constructed with the idea members had busy lives and would participate as time allows. Carol said she usually practices with the team once a week, though there are three opportunities to paddle three times a week and activities in the off season.

“The Indy SurviveOars is a very supportive team on a variety of levels,” Carol said. “They support each other throughout anything good or bad that’s going on in their lives, which is awesome.”

In addition to celebrating the survivors and their hard work toward recovery, the three day festival is meant to raise awareness about breast cancer, as well as promoting an international dialogue about the destructive disease. Ordinarily, the team participates in four to five races each year, but will only race three times this year due to the festival.

Bob said his wife took part in a couple of practice sessions similar to the Olympics before the festivities began. A parade of nations kicked everything off the evening of July 6 as representatives walked through the streets of Florence. The Blankman family walked in the parade together.

One woman from each country carried the flag of her nation in the parade, followed by the teams carrying banners to indicate who they were. A member of the Indy SurviveOars carried the American flag, leading the 42 teams from the US. She was the youngest woman from America taking part in the festival, having survived breast cancer twice at the age of 29.

The dragon boats are more than 40 feet long and are propelled forward by a crew of 20 to 22 paddlers working in coordination. Enough members of the Indy SurviveOars made the trip to Italy to field one full boat crew. The other women from the team joined composite teams with paddlers from other states or countries to round out full teams.

In addition to the full team, members of the Indy SurviveOars formed parts of three separate composite teams, working with women from New York, Vermont, and Australia.

“It really didn’t matter to the women which team they were on. Their motto is “One Team, One Blade” with the blade representing the paddle. This basically means that it doesn’t matter which boat you are in or where you are, we are all in this together.

Each race consisted of a heat with five boats racing against each other. Though it may have been a non-competitive event, each woman put all she had to offer into the race.

“Once the women were in their boats and racing in their heats, it was very competitive,” Bob said. “Each woman in each boat gave their best effort to not only win their heat, but to also have the best overall time for the two days of racing.”

The Indy SurviveOars full team finished 30th out of 125 teams, 11th out of 42 American teams, and second among the Midwestern US teams, their best showing in the three festivals of which they have taken part, Bob said.

According to Bob, the most beautiful and meaningful part of the festival took place as the second day of racing came to a close. Every dragon boat racing event, including the festivals, closes with a rose ceremony.

“They have a rose ceremony at every race for breast cancer survivors, but the one at the festival in Italy was overpowering,” Carol said. “To have so many survivors and to be able to share that with my family was an amazing and wonderful thing.”

All the boats are linked together in the water and every woman holds a rose while a brief talk is given or short prayer is said. The roses are all then tossed into the water to honor and remember the women who have lost their battles with breast cancer, or are currently experiencing a recurrence, as well as those who are currently fighting the disease.

“For this ceremony at the festival, music was also playing in the background,” Bob said. “All 4,000 women in attendance wore the same pink T-shirts for the ceremony. The women who were standing on the side of the river and not in the boats also tossed roses in the water. It was a very touching and beautiful way to end the festival.”

The Blankmans very much enjoyed their vacation and have returned to their daily lives. For Carol, that means weekdays in school, passing on the love of art to hundreds of students, and weekly practices with the Indy SurviveOars. She said the support she receives from those ladies, both on and off the water, is vital to her, because support is often the thing that gives those with cancer the strength to keep fighting.

“I always encourage people not to live to their staging and to find and be with people who are supportive of them – whatever that might be, because we all have different interests,” Carol said. “I like outdoors things, so dragon boat racing is perfect for me. Go find people that are like you and can support you in your journey.”

For those interested in seeing the dragon boats in action, the White River Alliance in Indianapolis is sponsoring an inaugural White River Dragon Boat Race at 8:30 a.m. Saturday, Sept. 29. The races should be finished by mid-afternoon.