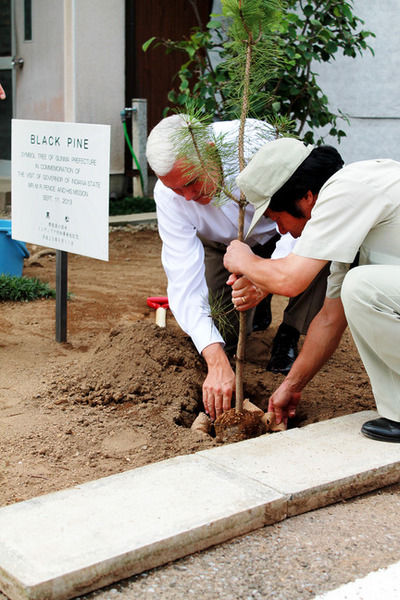 Governor Pence plants a tree at Shigeru, Japan. More on the Governor's trip to Japan can be found at http://www.in.gov/gov/Japan2013.htm. 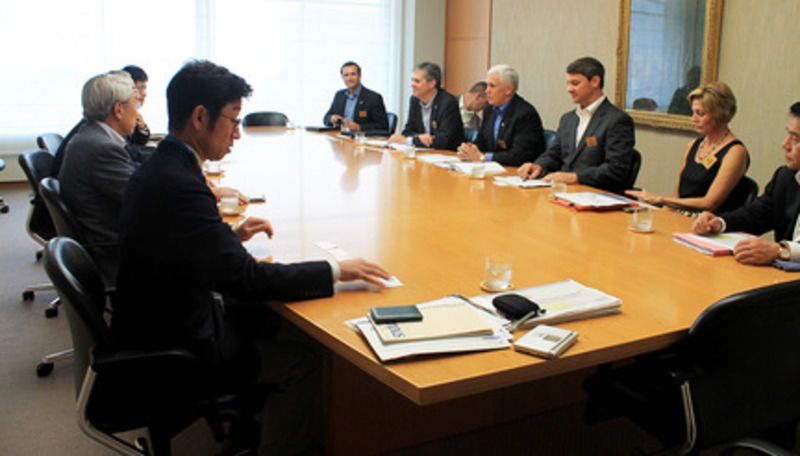 Above: Governor Pence pictured at Fuji Heavy Industries, Ltd., the parent company of Subaru, on Day 6 of his visit to Japan. Below: Governor Pence plants a tree at Shigeru, Japan. More on the Governor's trip to Japan can be found at http://www.in.gov/gov/Japan2013.htm.

Governor Pence plants a tree at Shigeru, Japan. More on the Governor's trip to Japan can be found at http://www.in.gov/gov/Japan2013.htm.

Above: Governor Pence pictured at Fuji Heavy Industries, Ltd., the parent company of Subaru, on Day 6 of his visit to Japan. Below: Governor Pence plants a tree at Shigeru, Japan. More on the Governor's trip to Japan can be found at http://www.in.gov/gov/Japan2013.htm.

OTA, TOKYO and NAGOYA, Japan –– Governor Mike Pence spent the fifth day of his jobs trip to Japan on the road thanking Indiana’s current customers for their investments in Indiana.

Pence traveled northwest of Tokyo by train to Ota, Lafayette’s sister city, to visit the headquarters of Subaru, the automotive division of Fuji Heavy Industries.

“Thousands of hardworking Hoosiers have jobs today because of Subaru’s commitment to Indiana,” said Pence. “On this trade mission, I’ve made it a top priority to personally thank Japanese companies for choosing Indiana out of a world of options. With our favorable business environment and a workforce highly skilled in advanced manufacturing, Subaru executives have noticed that Indiana is a state that works for business.”

In Ota, the governor toured Subaru’s facilities and joined its leadership for lunch where the group discussed its recently announced hiring plans. In May, Subaru of Indiana (SIA) announced plans to invest $450 million to build the Impreza at its Lafayette plant, creating up to 900 new jobs by the end of 2016.

Subaru has two assembly plant locations: Ota City, Japan, and SIA in Lafayette. SIA’s entire 832-acre Lafayette site has been designated a Backyard Wildlife Habitat by the National Wildlife Federation. SIA, which employs more than 3,600 associates in Lafayette, operates the country’s first zero-landfill automobile factory. Ninety-nine percent of the waste from the plant is recycled while the remaining one percent is converted into electricity.

During the afternoon, the governor met with executives from TOA Industries, which has a manufacturing facility in Mooresville, and Shigeru Co., Ltd., the parent company of Heartland Automotive, based in Greencastle and Lafayette. Shigeru’s Greencastle location was established in 1987 to manufacture dashboards for Subaru and has grown to also include production for the Camry line at SIA. Shigeru executives and Pence discussed expansion plans the company is expected to announce in the near future that could create hundreds of new jobs for Hoosiers at its Lafayette facility.

The governor spent the sixth day in Tokyo and Nagoya meeting with the leaders of several major Japanese automakers that currently employ thousands of Hoosiers to thank them for choosing to do business in Indiana and discuss possible plans for expansion.

“Indiana’s skilled workforce is the best-in-the-nation option for automotive companies looking for advanced manufacturing expertise,” said Pence. “Jobs are job one, and this is just another step that’s driving us toward increased employment. After multiple meetings today with automotive executives, we discussed what the companies are seeking for their next expansion and what Indiana can provide them as a state that works for business.”

The governor joined Mr. Yasuyuki Yoshinaga, president and chief executive officer of Fuji Heavy Industries, Ltd., the parent company of Subaru, for a meeting at the company’s global headquarters in Tokyo where the group discussed the success of the Lafayette production facility.

During the afternoon, the governor traveled southwest of Tokyo by train to Nagoya where he met separately with executives from three Japanese companies. Pence first visited with executives from Toyota Tsusho Corp., which has Indiana locations in Columbus, Lafayette and Princeton. He then met with leaders of Sugiura Seisakusho Co., Ltd., the parent company of Columbus-based Sunright America, and another company currently considering operations in Indiana.

In July, Pence joined executives from Sunright America to break ground on the company’s most recent expansion in Columbus. The company recently announced plans to invest $34.7 million to construct and equip two additional facilities on its Columbus campus, creating up to 103 new jobs by 2016. Sunright is a tier one supplier to Toyota, with most of all nuts on Toyota cars in America manufactured – 5 million pieces per day – at the Columbus facility.

Japan-based companies are large contributors to the Indiana economy – more than 44,000 Hoosiers are employed by the more than 200 Japanese companies in the state, with investments totaling more than $10 billion. Indiana is the only U.S. state that is home to three Japanese original equipment manufacturer (OEM) automotive companies (Subaru, Honda and Toyota).

The governor will conclude the jobs mission tomorrow, meeting with executives at Toyota Motor Corp. in Toyota City and Toyota suppliers before flying back to Indiana on Saturday.