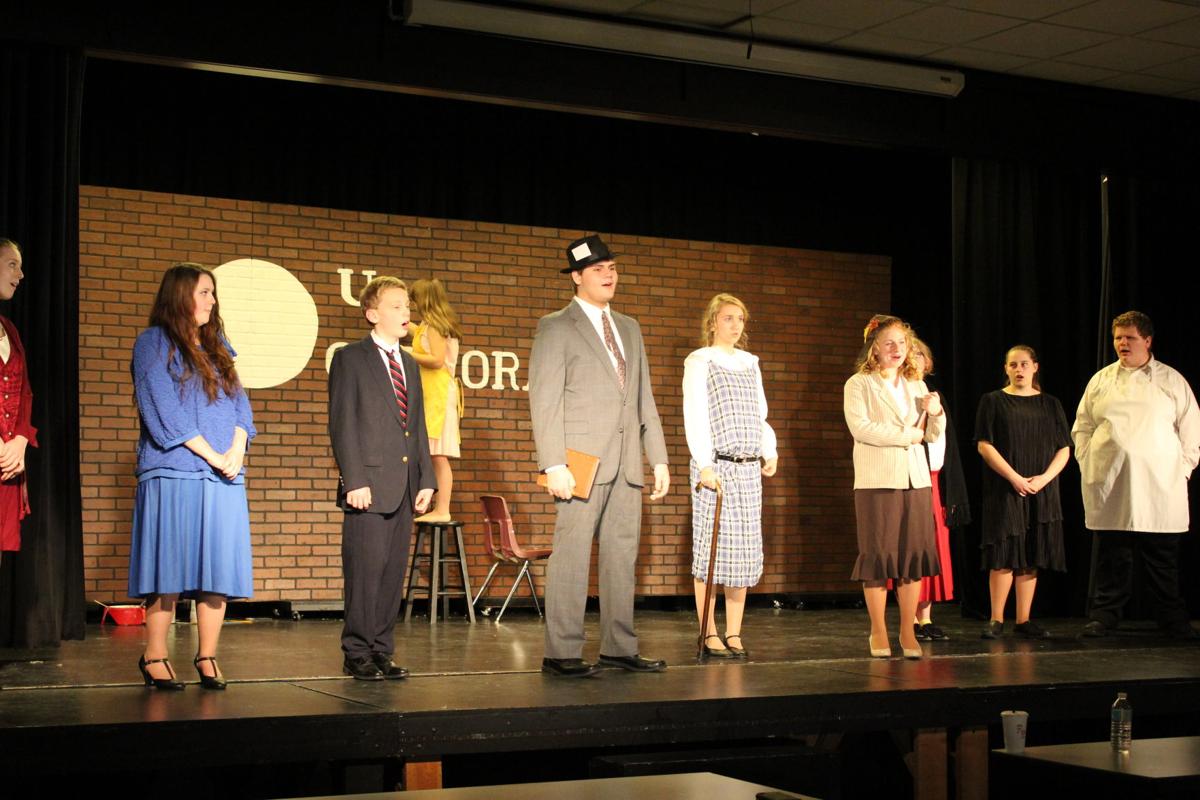 The cast of South Decatur High School’s “Radium Girls” has been hard at work perfecting this weekend’s performances. 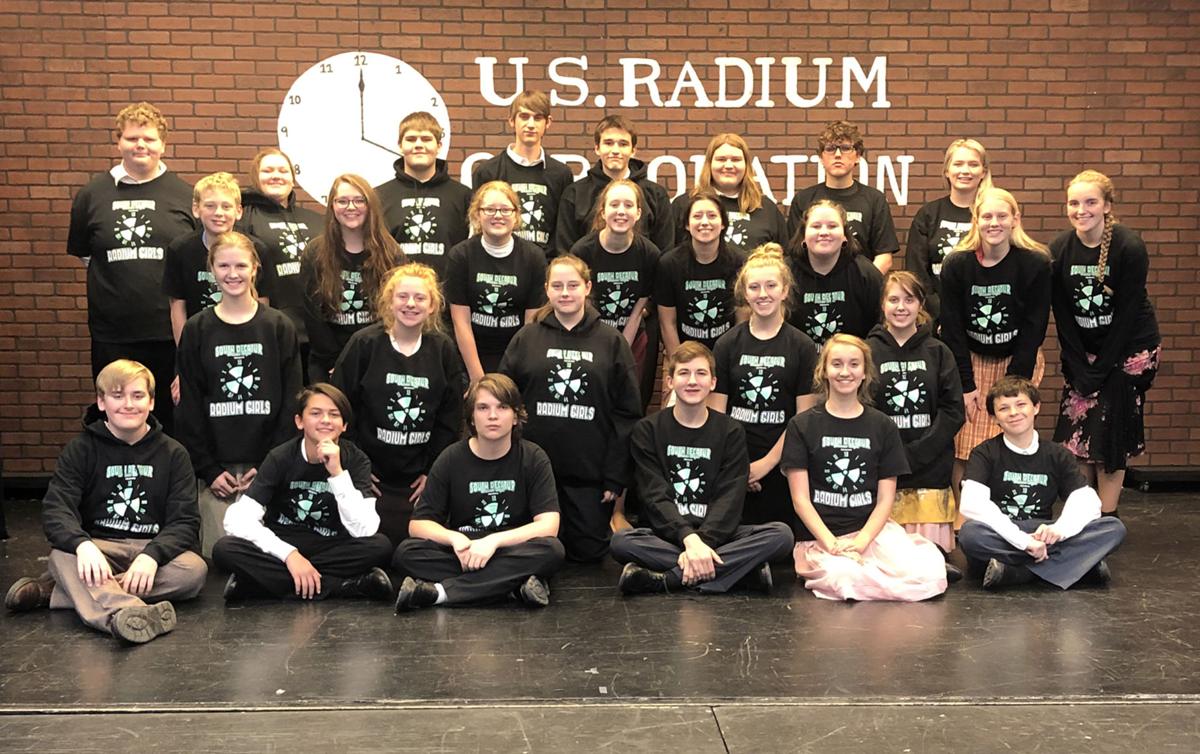 The full cast of South Decatur High School’s production of “Radium Girls.” The show is being presented in the school cafetorium Friday and Saturday evenings.

The cast of South Decatur High School’s “Radium Girls” has been hard at work perfecting this weekend’s performances.

The full cast of South Decatur High School’s production of “Radium Girls.” The show is being presented in the school cafetorium Friday and Saturday evenings.

GREENSBURG – The South Decatur High School Drama Club, led by Amanda Gault, presents “Radium Girls” on stage in their cafetorium this weekend, Oct. 8 and 9. Doors open at 6:30 p.m. and the shows start at 7 each evening.

“Radium Girls” is based on the true story of an 18-year-old woman named Grace Fryer who worked as a dial painter at the United States Radium Corporation in Orange, New Jersey in 1917. It was four days after the US had joined World War I; with two soldier brothers, Grace wanted to do all she could to help the war effort. She had no idea that her new job would change her life — and workers’ rights — forever.

With war declared, hundreds of working class women flocked to the studio where they were employed to paint watches and military dials with the new element radium, which had been discovered by Marie Curie a little less than 20 years before. Dial painting was “the elite job for the poor working girls,” it paid more than three times the average factory job and those lucky enough to land a position ranked in the top 5% of female workers nationally, giving the women financial freedom in a time of burgeoning female empowerment.

Many of them were teenagers, with small hands perfect for the artistic work, and they spread the message of their new job’s appeal through their friend and family networks.

Radium’s luminosity was part of its allure, and the dial painters soon became known as the “ghost girls” because by the time they finished their shifts they themselves would glow in the dark. They made the most of the perk, wearing their good dresses to the plant so they’d shine in the dance halls at night, and even painting radium onto their teeth for a smile that would knock their suitors dead.

In 1922, one of Grace’s colleagues, Mollie Maggia, had to quit the studio because she was sick. She didn’t know what was wrong with her. Her trouble had started with an aching tooth. Her dentist pulled it, but then the next tooth started hurting and also had to be extracted. The doctor thought it was rheumatism; he sent her home with aspirin.

By May 1922, Mollie was desperate. At that point, she had lost most of her teeth and the mysterious infection had spread. Her entire lower jaw, the roof of her mouth, and even some of the bones of her ears were said to be one large abscess. But worse was to come. When her dentist prodded delicately at her jawbone in her mouth, to his horror and shock it broke against his fingers. He removed it, not by an operation, but merely by putting his fingers in her mouth and lifting it out. Only days later, her entire lower jaw was removed in the same way.

The bulk of the play details Grace and her colleagues’ fight for justice in the American court system. The resulting laws passed to protect the “Radium Girls” forever changed the employment laws in the United States and the world.

When asked how she was able to create a character under such emotional duress, she replied, “I just tried to think of what it would be like if I myself had to go through what these girls had to. It is honestly really difficult, because I can’t imagine trying to get through everything they did. This play takes a lot of out of the box thinking because people don’t feel like these characters every day, so I had to use a bit of imagination to really get myself into the role.”

Kallie first got started with theatre in the seventh grade, running a spotlight for the show “Singin’ in the Rain.” Working on the light crew up until her sophomore year, she landed an ensemble chorus role in “Grease.”

“I was always so terrified to audition in front of other people. I remember that in my audition (for Grease), I didn’t even look up when I sang I was so nervous,” she said.

Since “Grease,” she’s been in “Sound of Music,” “Pride and Prejudice,” and now, “Radium Girls.”

Does she plan to use her acting chops after high school?

“At any college I’ve looked at, they’ve had a drama department and, yes, I would love to be in a few shows during college. That would be a dream because I know that everyone would work even harder than our cast members already do here. It would be so much fun! When I graduate, I’m looking to go into music, so doing the musicals, for example, let’s me learn about how much effort it takes to put together a musical,” she said.

“These kids are amazing! They take direction very well, which makes my job easy,” said Director and Drama Club sponsor Amanda Gault. “I am very detail oriented, and appreciate the cast being supportive of my attention to those details in their movements, prop pieces, and costumes. I also love when they give their own suggestions for scenes. They have some great ideas!”

Tickets for “Radium Girls” are $7 for adults, $5 for students, and children 5 & under are free. Tickets are now on sale and available in the front office at South Decatur Junior-Senior High School.