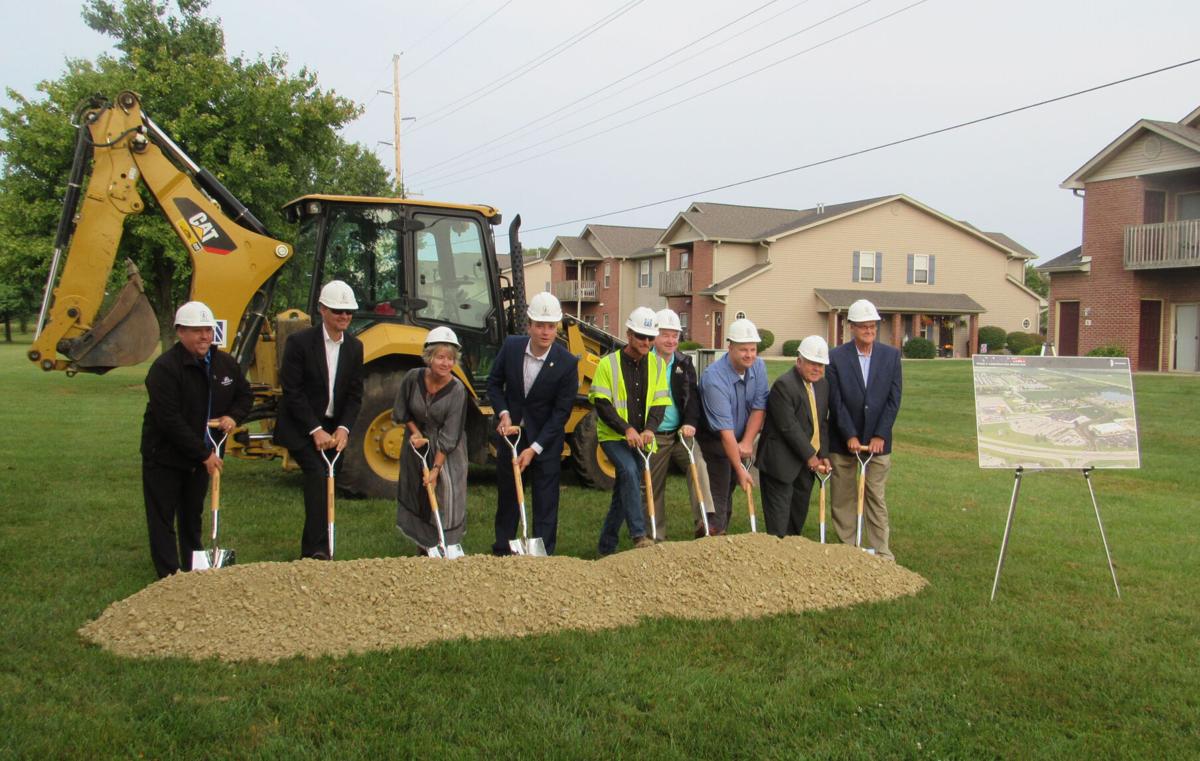 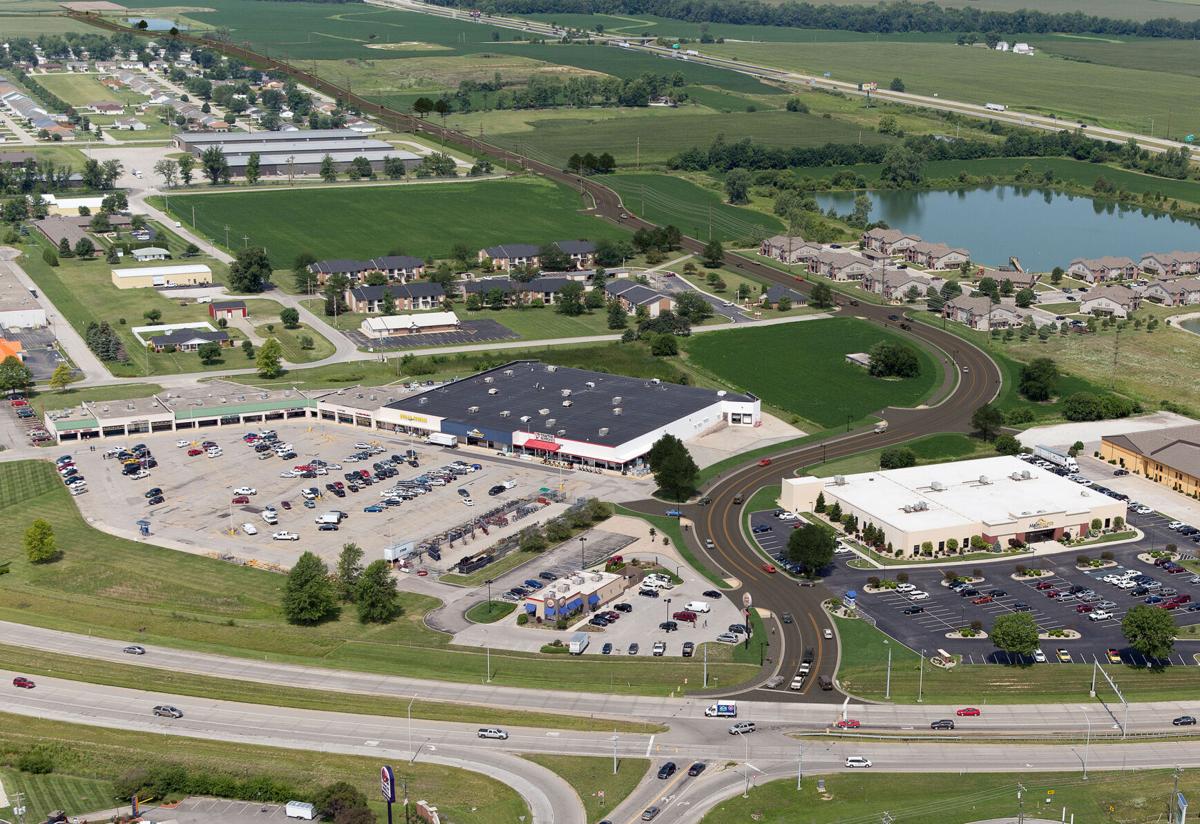 GREENSBURG — With remarks by Greensburg Mayor Marsh, INDOT Grant Administrator Kathy Eaton-McKalip, and community leaders from the Greensburg Redevelopment Commission, Greensburg City Council, Greensburg Board of Works, the EDC, the engineering firm Structurepoint, and Milestone Construction, a groundbreaking ceremony was conducted Wednesday for the second half of the much discussed Veterans’ Way corridor that will join N. Michigan Avenue with the N. Lincoln Street business district.

After multiple studies regarding Greensburg’s location and the feasibility of better aligning the community to I-74 in the name of improved commerce and growth, construction on Phase 1 of Veteran’s Way was begun in 2013 and put on pause in 2015. The new four-lane byway was tacked onto development east of Michigan Avenue by a roundabout, and then stretched to make contact with Smith Road. Smith Road tied the bypass to N. Broadway Street and stopped there.

Negotiations for acquiring the land necessary to complete the second half of the project began, and only now are all the players ready to begin the final phase of something that will forever change the way Greensburg looks and operates.

Mayor Marsh said, “This project has often been called the Road to Nowhere, but now we begin the final act that will turn the Veterans Way into the Road to Opportunity.”

“We are unlocking the front door of our community,” Marsh continued, recounting the multiple business and growth advantages the completed roadway is expected to offer businesses interested in moving to Greensburg. “You all know that businesses look at traffic counts, flow, and visibility when looking for new locations, and you all know that improving our frontage on I-74 will do that. We are connecting neighborhoods to health care, grocery stores and education with this project as well, so the advantages are many.”

The mayor also mentioned the infrastructure that would be added – storm drains sewers and water main improvement – because of the Veterans Way effort.

The effort is projected to cost $13 million, $7 million from the community and $6 million as a grant from INDOT.

INDOT Grant Administrator Kathy Eaton-McKalip said she was honored to be part of the growth, saying that the INDOT shares 25 percent of its income with projects like the Veterans Way project.

“This project began in 2014 when the community asked for the funds for the project. Since then, there’s been lots of discussion about this,” she told the assemblage. “INDOT understood the need for this and we are honored and pleased to be a partner with Greensburg on it.”

Greensburg Redevelopment Commission’s Adam Wentzl thanked City Engineer Ron May and City Street Commissioner Mark Klosterkemper for their contribution to the project, saying, “They put their feet on the ground every day for us, and even though theirs are thankless jobs, we do appreciate everything they do for us.”

Wentzl also thanked INDOT and all the members of the community and said, “I’m proud that we’re finishing this road and I’m excited that it will draw people to our town to live, to have fun, and to start businesses.”

Dr. Rodney King spoke, telling the group that a project of this size takes a lot more time to come to fruition than just a 15 minute conversation at Stories, and thanked several persons from previous city committees who had discussed the possibility of the Veterans’ Way expansion as far back as 2006.

King continued, detailing other benchmarks of growth for the community including the new water plant, a second fire station on the south side of the train tracks, several modifications made in the downtown area and in the industrial park, the Honda plant expansions, and the two-part Lincoln Street renovation. He also mentioned the continuing airport expansion effort and the Veterans Way project.

“Many accolades go to this group for their dedication to Greensburg, and it’s good they get the opportunity to see this project through to completion,” King said.

After ceremonial shovel and construction hat photos were taken, EDC Director Bryan Robbins said, “I always knew this project was going to go through because of the determination of this administration and the one before.”

In regards to the 250 acres of prime business real estate created by the finished Veteran’s Way project, Robbins said, “In light of the current progress of this, many businesses have expressed interest in exploring opportunities here,” but chose not to mention specifics.

When asked for a tentative completion date for the project, Robbins declined to comment, choosing “not to put forth unrealistic expectations.”

“When it’s finished, we hope to have a good mix of rooftops (residential) and businesses out here,” he said.

He also said the finished expansion will create an excellent opportunity for people to “window shop what’s in Greensburg.”

Mayor Marsh said he is proud of this project.

“We’ve got a whole year of construction to go through, but this is the start of the end,” he said. “I’m proud of the many people who’ve been part of this for the last 14 years, starting with the Frank Manus Administration through today, and even though this is the beginning of the end, it’s really the beginning for Greensburg toward growth and new development.”