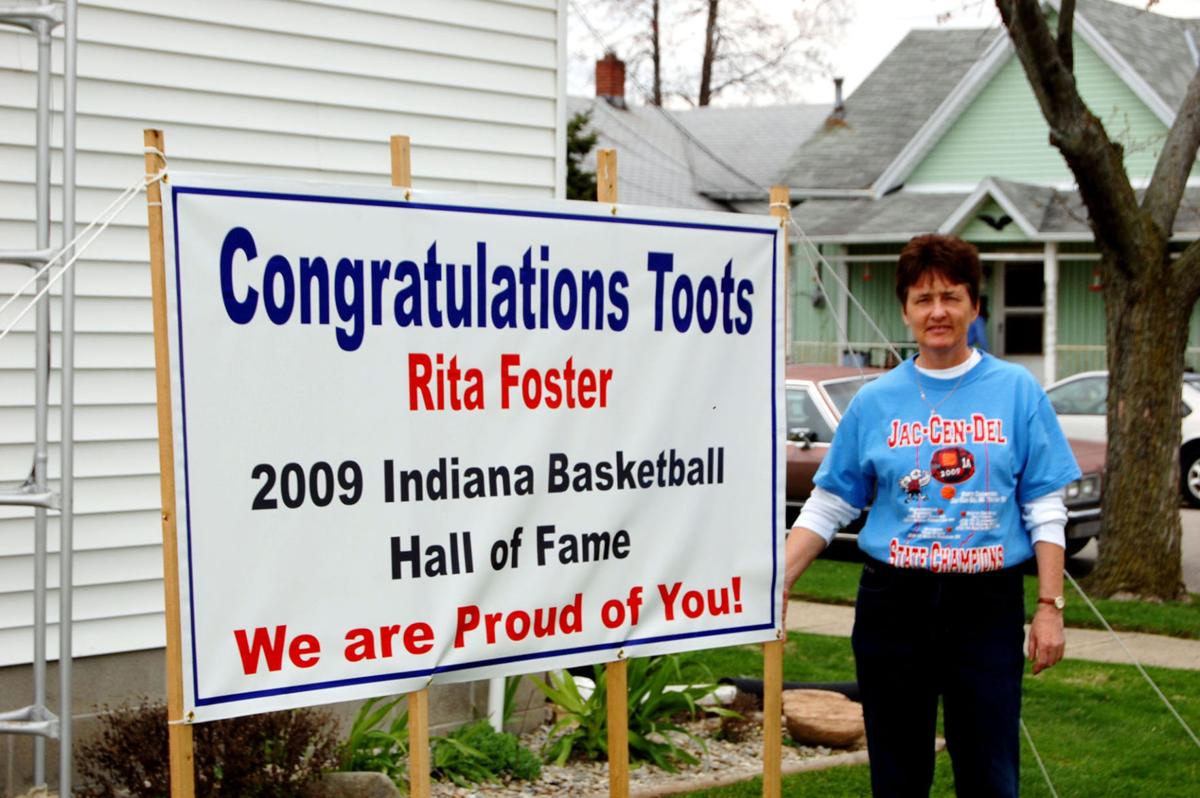 Rita Foster stands in front of a sign made by her sister, Laurie, proclaiming her honor. 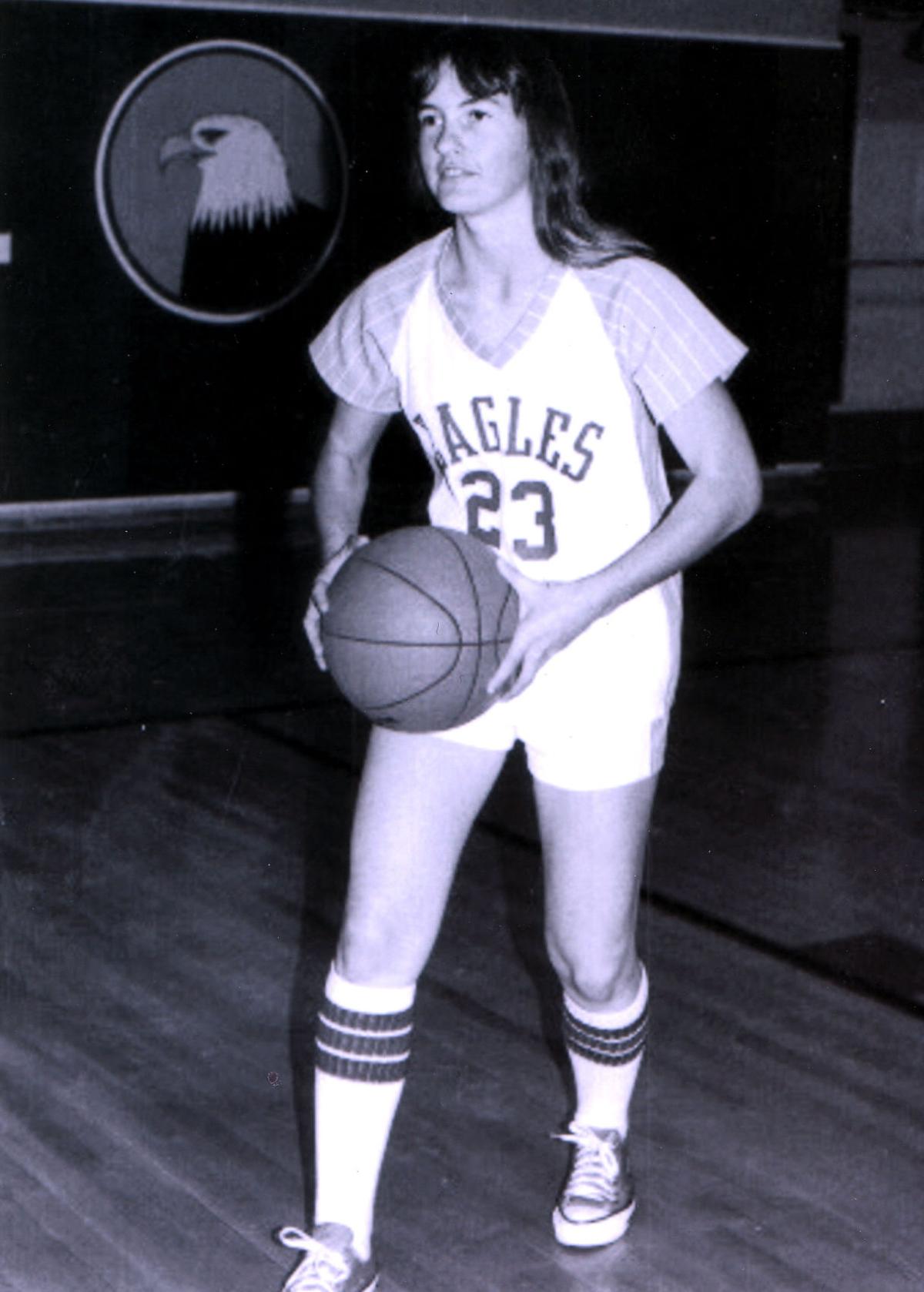 At 17, Foster was a 5’4” force to be recokned with who scorched teams for three years with her ability to score from anywhere on the floor. She took the JCD Lady Eagles to the state finals and was runner-up for the Miss Basketball award and was named to the All-Star team.

Rita Foster stands in front of a sign made by her sister, Laurie, proclaiming her honor.

At 17, Foster was a 5’4” force to be recokned with who scorched teams for three years with her ability to score from anywhere on the floor. She took the JCD Lady Eagles to the state finals and was runner-up for the Miss Basketball award and was named to the All-Star team.

To say that being inducted into the Indiana Basketball Hall of Fame is an honor would fall into the category of saying the Chicago Fire was a minor blaze. It’s a rare accomplishment reserved for a select few individuals and one team - Milan’s 1954 storybook squad. Many may have seen the sign beside the home on the northeast corner of Washington and Davidson Streets congratulating Rita Foster on her selection to the Hall of Fame this year. A little more than 30 years before this season’s Jac-Cen-Del boys team stormed the state tournament and came away with the title, JCD girls virtually dominated the court and at the center of that tiny powerhouse from Osgood was Foster. A runner-up for Miss Basketball in 1978, the diminutive 5’ 4” Foster was the star on a team that annihilated its competition and went 62-3 during her three seasons of varisty play. All three losses were in the state tournament - Bloomfield in the semi-state finals in 1976 and ‘77, and Warsaw in the state finals of 1978. To give this feat perspective, only two inductees were born in Decatur County - Dave Porter and H.T. McCullough. Both men show Westport as their high school and Porter’s selection comes more for his long-time coaching career at Sand Creek, Jac-Cen-Del and South Decatur. A direct link for Foster is a relationship with Porter that goes back to her own career at Jac-Cen-Del. She will be the first ever inductee from Jac-Cen-Del and only the fourth individual selected from Ripley County. None of the earlier players enshrined are female and two of the players are from the only selected team - Bobby Plump and Ray Craft who served as assistant commissioner of the IHSAA. The other player from Ripley County honored was Sam Scheively who graduated from Sunman in 1937. Foster will also be only the third female from southeast Indiana inducted into the Hall of fame and will be the second player to have played in the Indiana girls’ tournament. Maria Stack who graduated in 1980 from Columbus East and Mary Louise Eisenhart who graduated from Madison in 1943. Foster played during the infancy of girls basketball in the state. Organized play was new to Indiana high schools, and she was part of the first squads to thunder through a tournament. During the 1977-1978 season, the Eagles went 14-0 destroying their opponents by an average of 45 points, including a 105-point defeat of Dillsboro, and swept the first eight games in tournament play. No game had a margin of less than 10 points before the morning game at the state finals. In that contest the Lady Eagles defeated Mooresville 50-42. That night Warsaw won 75-60. Despite the losing effort, and battling the flu, Foster still tossed in 20 points to go with 18 in the morning. She would be second in the Miss Basketball voting to Chanda Kline of champion Warsaw, and played in the All-State series between Indiana and Kentucky. She led the team in scoring in both All-Star games. Foster, to this day, remains modest about her accomplishments. Despite being named to the Hall of Fame, she diverts attention back to her fellow Eagles. The team that year consisted of Foster and Joan Peetz at guard, Kim Hermesch at center with Chris Kappes manning one forward. “Kim Hermesch was the smartest Player that I ever played with,” Foster said. “Kim was always saying ‘Why don’t we try this?’ or ‘why don’t we try that?’ It was like having a coach out on the floor.” Another player she recalled was Peetz. “Joan was a great passer. I got a lot of good passes from her,” Foster said with a smile. “Now I’m receiving an honor that is a tribute to the other members of the team. Someone had to be there to pass me the ball.” Playing in the tight knit Osgood-Napoeon community was a benefit to the members of the three teams that Foster was on. Basketball games were common and the girls played as well as the boys. Mark Wit, Doug Peetz, Gary Wayne and Larry Abplanalp would frequently scrimmage the girls. Sometimes the guys lost. “We played together since grade school,” Foster said. “We knew where one another was going to be.” Although Porter attempted to develop some set plays for the girls, they would quickly revert to form. “We played what I call barnyard ball. Most of the girls were from the country. I was a city girl, but we played barnyard ball. When things were in doubt, we would always go back to the way we always played,” Foster recalled. In the barnyard, no one kept score. In the IHSAA, they did. Foster scored 23 points per game her senior year, averaged six steals and pulled in eight rebounds. The 23 points that she scored happened a little less than a decade before the 3-point shot was implemented in high school and college basketball. One of her favorite moves was faking a drive on her defender then dropping a bomb from long range. From the range at which she shot, many of her baskets would have counted three points today. ”A lot of fans and my family will tell you that my point count would have been higher if I were playing today,” she said. Foster scored 1,555 points in her career, which If current rules were in effect, that 23 points per game average could very likely be in the high 20s or low 30s. It could have also added 200 to 500 more points to her total. A major influence on Foster’s play was her late father, Stanley, who was inducted posthumously into the Ripley County Hall of Fame in 2008. In the Indiana High School Basketball yearbook of 1978, Foster is reported to have said “He is the one who inspired me to know, love and respect the game of basketball. He stood by me. I couldn’t have done it without him.”

Nancy Jean Campbell Badger passed away at the age of 89 on March 10, 2020, in Huntington New York. Arrangements are pending at Moster Mortuary in Rushville.