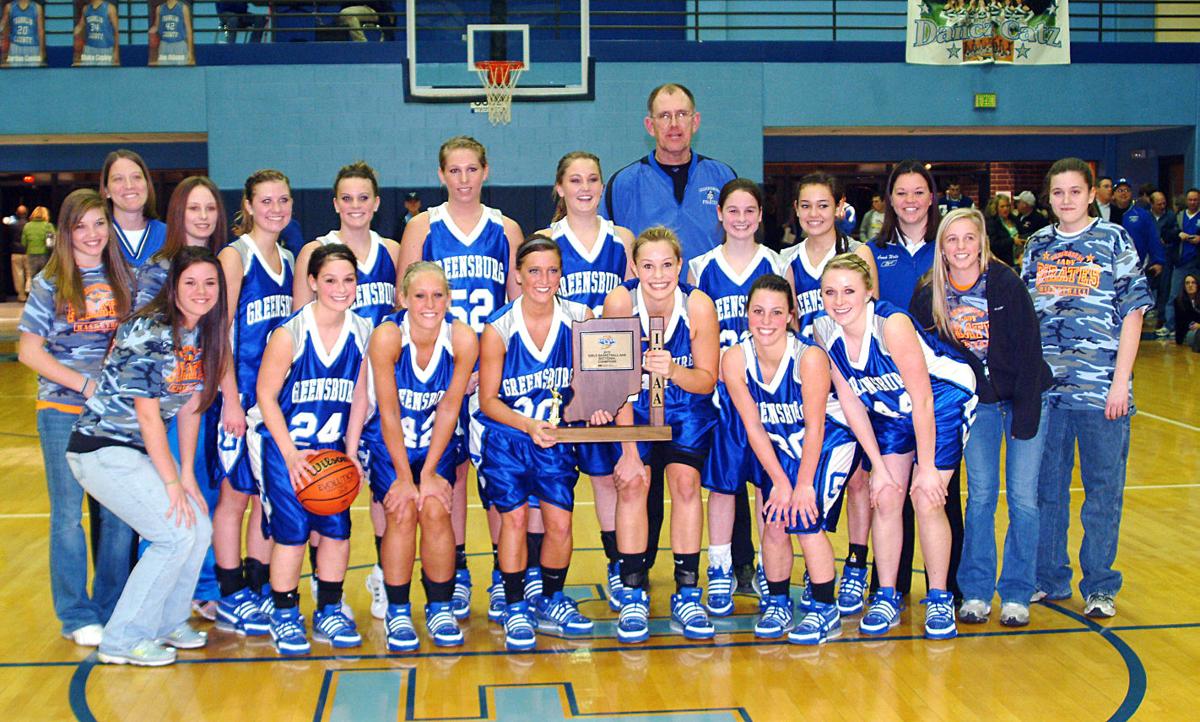 The Lady Pirates claimed the Franklin County Sectional title Thursday with a 50-39 victory over Batesville. 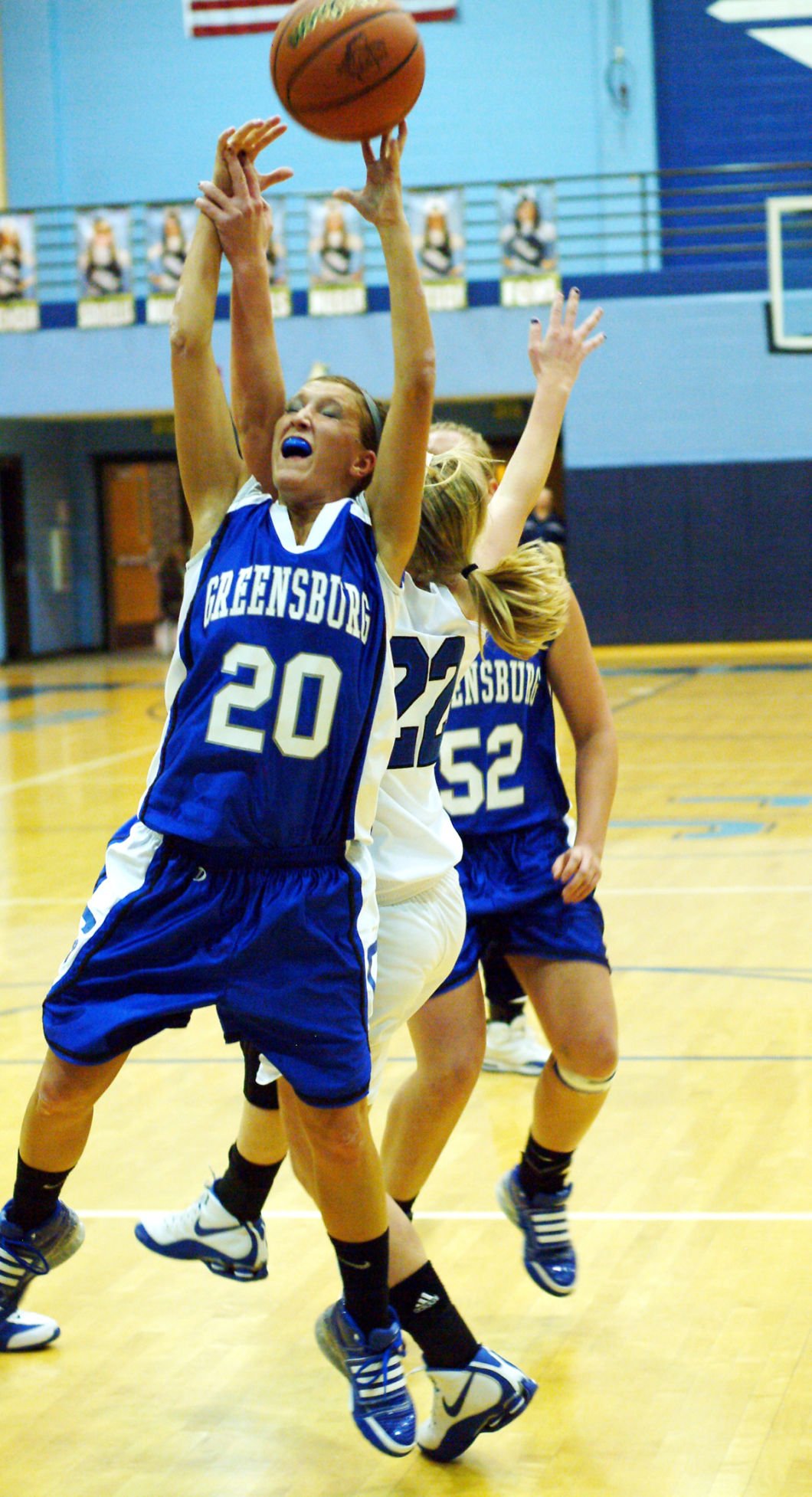 Greensburg's Melanie Trammell battles under the boards for the rebound during the sectional championship game at Franklin County Thursday.

The Lady Pirates claimed the Franklin County Sectional title Thursday with a 50-39 victory over Batesville.

Greensburg's Melanie Trammell battles under the boards for the rebound during the sectional championship game at Franklin County Thursday.

In the third meeting between the Lady Bulldogs of Batesville and the Lady Pirates of Greensburg, it was Greensburg that took the season series and more importantly the sectional title at Franklin County by the final of 50-39. “Everyone played extremely well defensively,” Greensburg head coach Mike Miller said. “We have been talking nothing but defense the past three days.” With the win, the Lady Pirates advance to the Mt. Vernon Regional to take on Roncalli (15-7) in the second semifinal Saturday. No. 1 Rushville and Western Boone play in the first semifinal. Greensburg opened the game with a bucket from Chas Lecher, but the Lady Bulldogs responded with three consecutive lay-ups – by Caroline Paul, Elise Stephens and Erin Lanning – to grab a 6-2 lead. Trailing 8-4, the Lady Pirates made a run as Lecher hit two from the charity stripe. Hannah Doerflinger followed with a bucket and Lecher hit a jumper to give Greensburg a 10-8 lead with 2:11 to play in the first quarter. The lead went back to Batesville as Fawn Ryan scored from the block and then hit 1-of-2 from the line. Greensburg closed the first quarter with an inside bucket from Jennifer Redelman and 3-pointer by Melanie Trammell to lead 15-11 after eight minutes of action. Two Trammell free throws extended the lead to 17-11 as the second quarter got underway. The lead grew to 18-11 before Batesville’s Madeline Lambert scored to get the Lady Bulldogs on the board in the second quarter. With 3:16 to play in the half, Greensburg’s Katie Burns hit a long jumper and was fouled. The Batesville player landed on Burns and the Greensburg senior asked her teammates, “Did that go in?” The following free throw did not fall, but the Lady Pirates led 20-13. Trammell followed with a 3-pointer to push the lead to 10 points and force Batesville head coach Jason Slopsema to call for a time-out. Batesville got a bucket from Stephens out of the break, but the Lady Pirates answered with a 3-pointer from Trammell. Batesville’s Paul closed the scoring in the first half as the Lady Pirates led 26-17. Greensburg opened the second half with a free throw from Trammell and bucket from Laura Welage to lead 29-19. Batesville cut the deficit to 10 on a bucket by Stephens and then to nine on a Paul free throw. Late in the third, the Lady Pirates got the lead to 13 points on a Trammell 3-pointer, but again the Lady Bulldogs responded. Batesville got a traditional three-point play from Ryan, free throw from Stephens and bucket from Stephens to cut the deficit to 35-28 heading to the fourth quarter. Trammell’s jumper from the elbow extended the lead to 37-28, but Stephens came right back on the other end to score and get the deficit back down to seven with 6:34 to play in the game. One minute later, Paul hit two from the free throw line and the Greensburg lead was down to five at 37-32. Greensburg went to Lecher to stop the run as she scored with the left hand at the 4:20 mark to give the Lady Pirates a seven point cushion. A rebound bucket by Batesville’s Lanning made it 39-34. Welage then came up big for the Lady Pirates. She scored two straight buckets and stole the inbounds pass after the second to give Greensburg a 43-34 lead and the ball with under two minutes to play in the game. Greensburg hit enough from the charity stripe down the stretch to hold off Batesville as the Lady Pirates prevailed 50-39. “Trammell and Lecher really stepped up offensively for us. We really didn’t shoot the ball that well, but we knew if we played well defensively, that would lead to more offense,” Coach Miller added. The win extends Greensburg's record to 18-5 overall and boosts its winning streak to a season-high seven games. Trammell led all scorers with 20 and Lecher added 16. Batesville was led by Stephens with 17 points. Box score Greensburg , Batesville Scoring: Greensburg – Welage 3 0 1-2 7, Trammell 1 4 6-8 20, Mo. Menkedick 0 0 1-2 1, Doerflinger 1 0 0-2 2, Ma. Menkedick 0 0 0-1 0, Burns 1 0 0-1 2, Lecher 5 0 6-11 16, Redelman 1 0 0-0 2. Totals 12 4 14-27 50. Batesville – Paul 2 0 3-4 7, Lambert 1 0 0-0 2, Stephens 8 0 1-2 17, Ryan 3 0 3-4 9, Lanning 2 0 0-0 4. Totals 16 0 7-10 39.