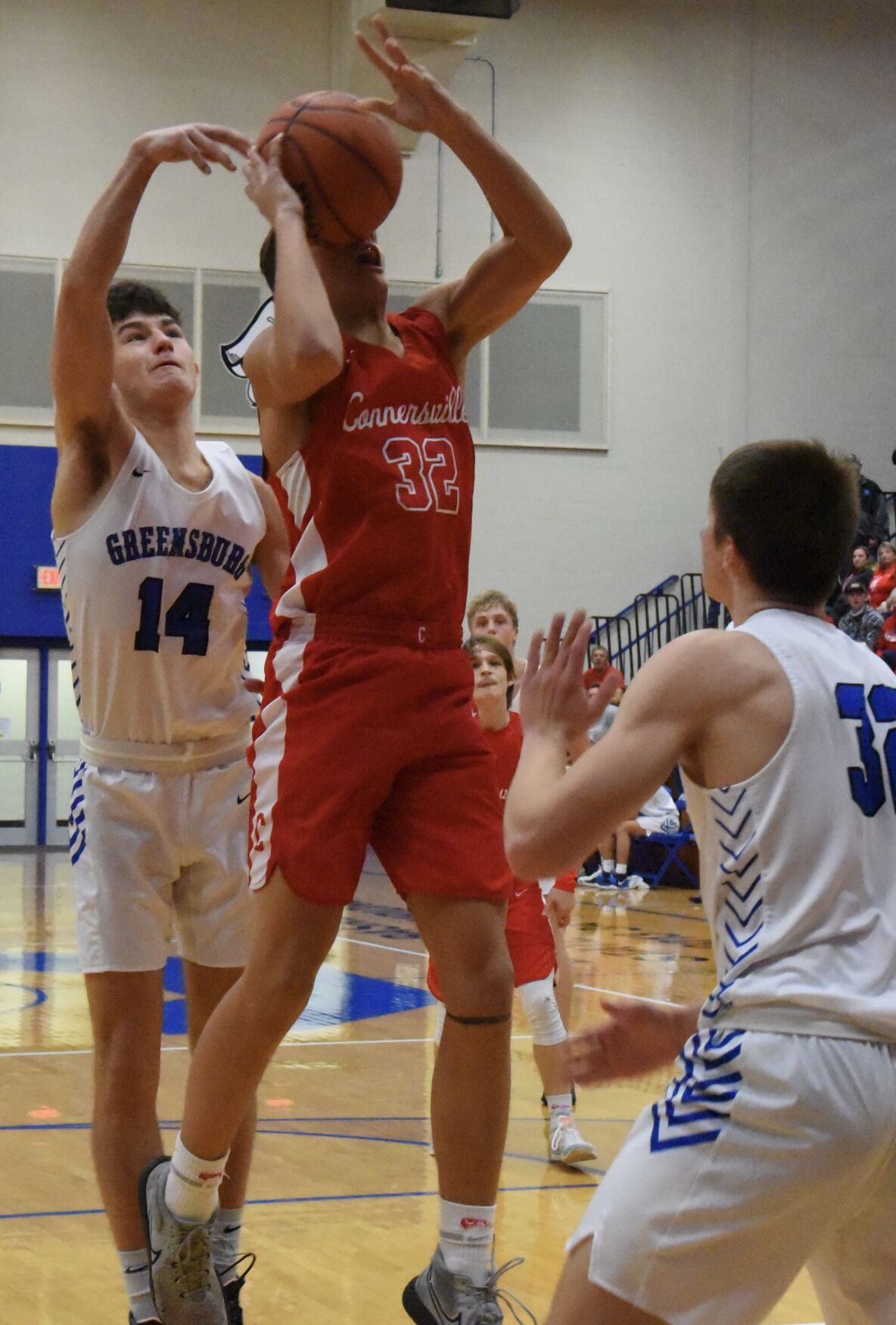 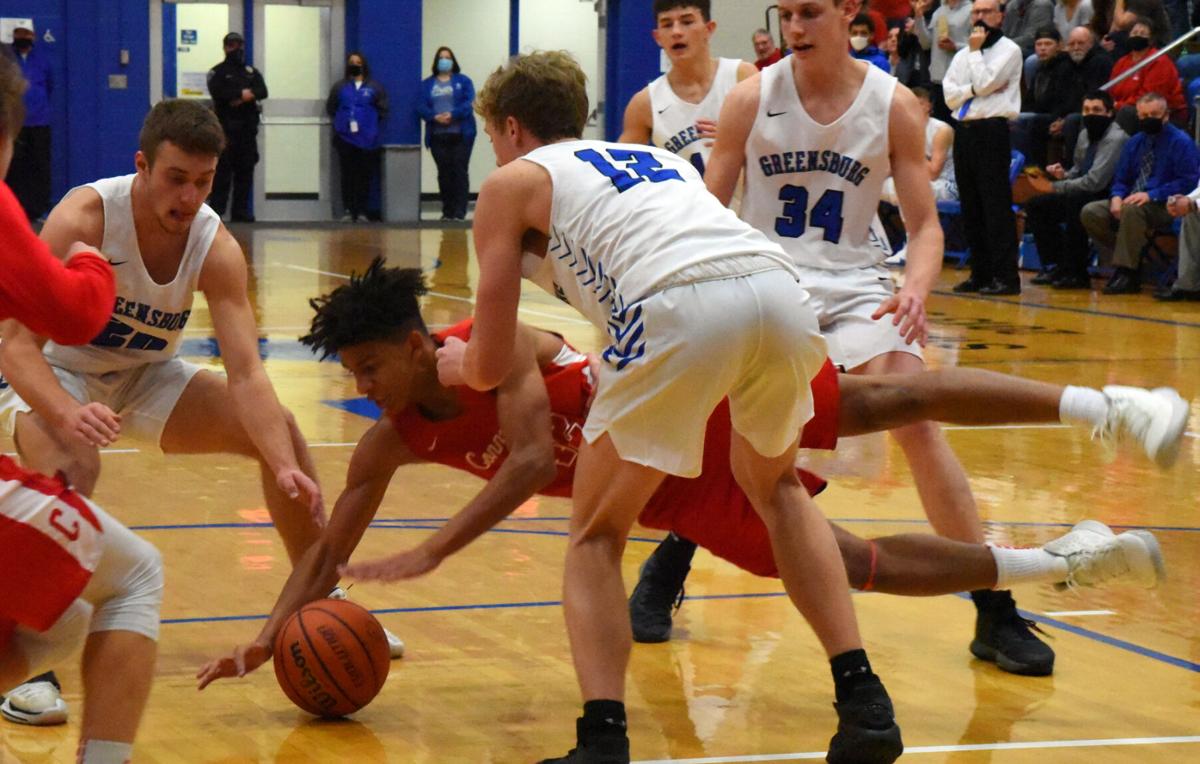 GREENSBURG — They did it in the regular season, and now they’ve done it in the postseason.

The Connersville Spartans celebrated beating the Greensburg Pirates on their home floor Saturday night, winning 46-35 and taking the Sectional 29 championship.

Spartans coach Kerry Brown cited defense and rebounding for allowing them to cut down the net.

“We competed,” Brown said. “We played really hard and tough tonight. If you look at it individually, I don’t think we have the better individual talent, but we’re a pretty good team defensively and offensively. That’s why we’re successful. We understand our roles and execute them pretty good. And we have to in order to beat someone – much respect to Greensburg, they’re a good team and they’re well-coached.”

Connersville improved to 17-7 and advances to the 3A Washington Regional. The Spartans will play at 1 p.m. Saturday against Sullivan (21-3).

Winners of the Eastern Indiana Athletic Conference, the Spartans play with a methodical approach. It helped create layups and quality looks Saturday night. They shot 58 percent compared to 46 percent for the Pirates.

By being extraordinarily patient, they drained the clock and limited Greensburg’s offensive opportunities.

“We’re very methodical,” Brown said. “Some people probably say we borderline on stalling or holding the ball. Our best shooters, if they’re open and they have their shots, they take them. We just want a great possession every time down the floor. Our kids understand that.”

Greensburg committed turnovers early that led to fastbreak layups and an early lead for the Spartans. They led 13-6 after the first quarter, but the Pirates cut it to 20-16 at the half.

However, Connersville started pulling away and led 36-24 after the third.

“We just couldn’t get those key stops there in the third when we needed them,” Greensburg coach Stacy Meyer said. “They’re a really hard team to come back on because they defend you so well. And then offensively, they don’t take bad shots and they don’t turn the basketball over, so it’s hard to create some offense just because of what they do at that end of the floor.

“They’re good. They beat us twice this year on our home floor. They’re obviously a very good basketball team.”

Lane Sparks scored 20 for the Pirates and Colin Comer scored eight. They provided the bulk of the offense, however, and it wasn’t until Ki Dyer’s 3-pointer with just over three minutes left that anyone besides Sparks and Comer scored.

“We wanted to be tough and tight with (Sparks) and Comer,” Brown said. “We had to make the other guys beat us. That was the game plan in a nutshell. We had to guard their two best players, we thought, and help off the other three guys and not let them have H-O-R-S-E shots. Our guys executed our defensive game plan.

“It was kind of the same thing last time we played them. We wanted to make it really tough on those two guys to score and make someone else beat us. Sparks got his 20, but no one else stepped up enough to beat us tonight.”

One night after scoring a career-high 29 points against Batesville, junior Dakota Walters was held scoreless after missing his only two attempts, both from 3-point range.

“We didn’t give him quite the same looks maybe as he got (Friday) night,” Brown said, “and we talked about that. Those other guys can hurt you. We had to take our chances. You’ve got to pick your poison.”

The Spartans won at Greensburg in the regular season, 49-42 in overtime, when Meyer missed the game to be with his father days before his death.

Road teams have had success in the series in recent meetings. Greensburg beat Connersville on its home floor in last year’s sectional semifinals.

“They probably came in with a little bit of a chip on their shoulder,” Meyer said.

“You wish you could win the sectional, but it didn’t happen. And I have to tip my hat to Connersville. They took away a lot of things we’re good at. They’ve got some senior leadership.”

The Pirates were held to season lows in field goal attempts (28) and points (35). Their two lowest scoring outputs this season came against Connersville.

Looking back, ahead for GCHS

Early March is a time of the year when Greensburg is used to cutting down the net. The Pirates had won sectional titles in eight of the previo…