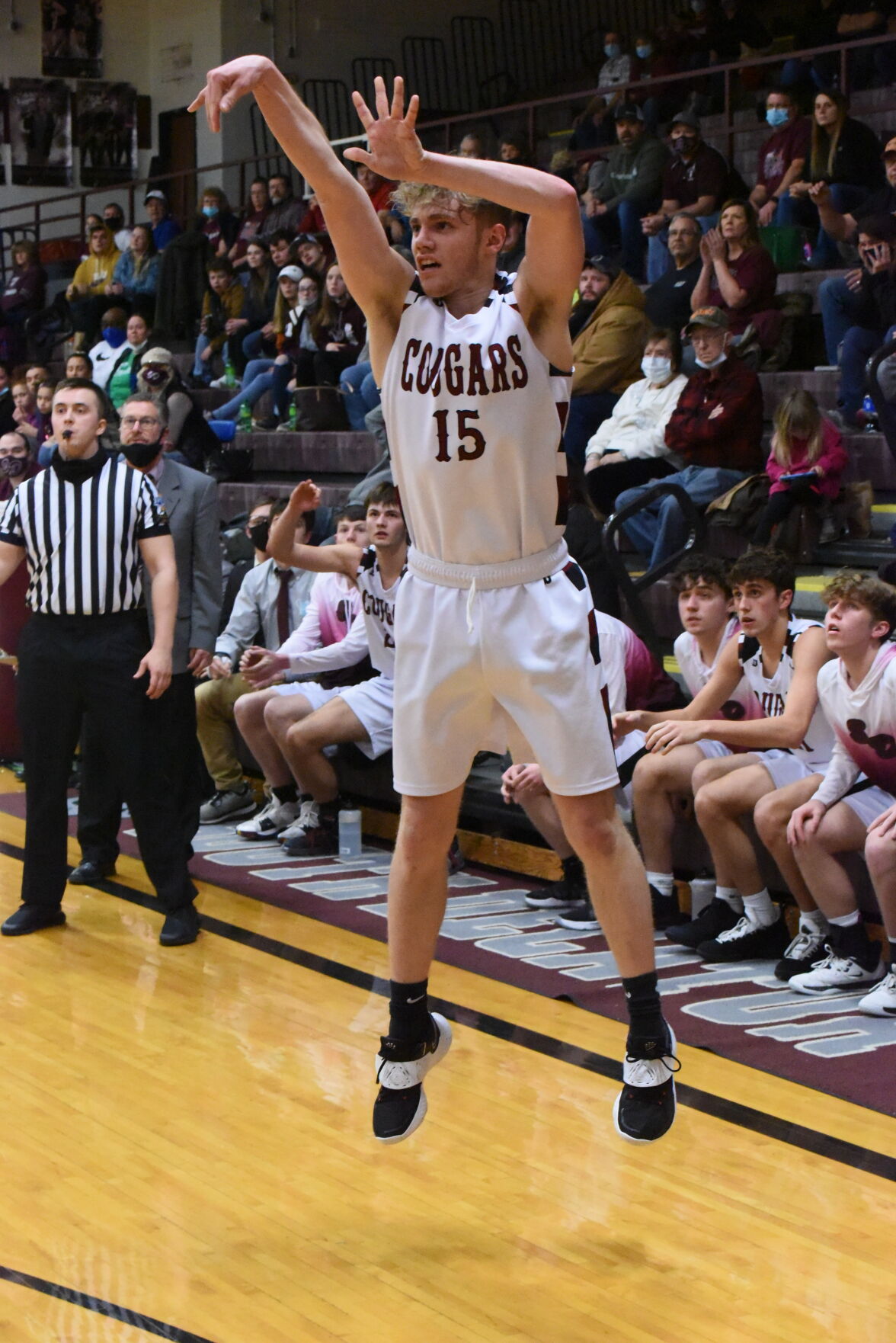 This 3-pointer from Chase Boswell tied the game with 1:11 to go, and Boswell got a steal and a layup seconds later. They were two huge plays that helped the Cougars pull out a thrilling home win Friday. 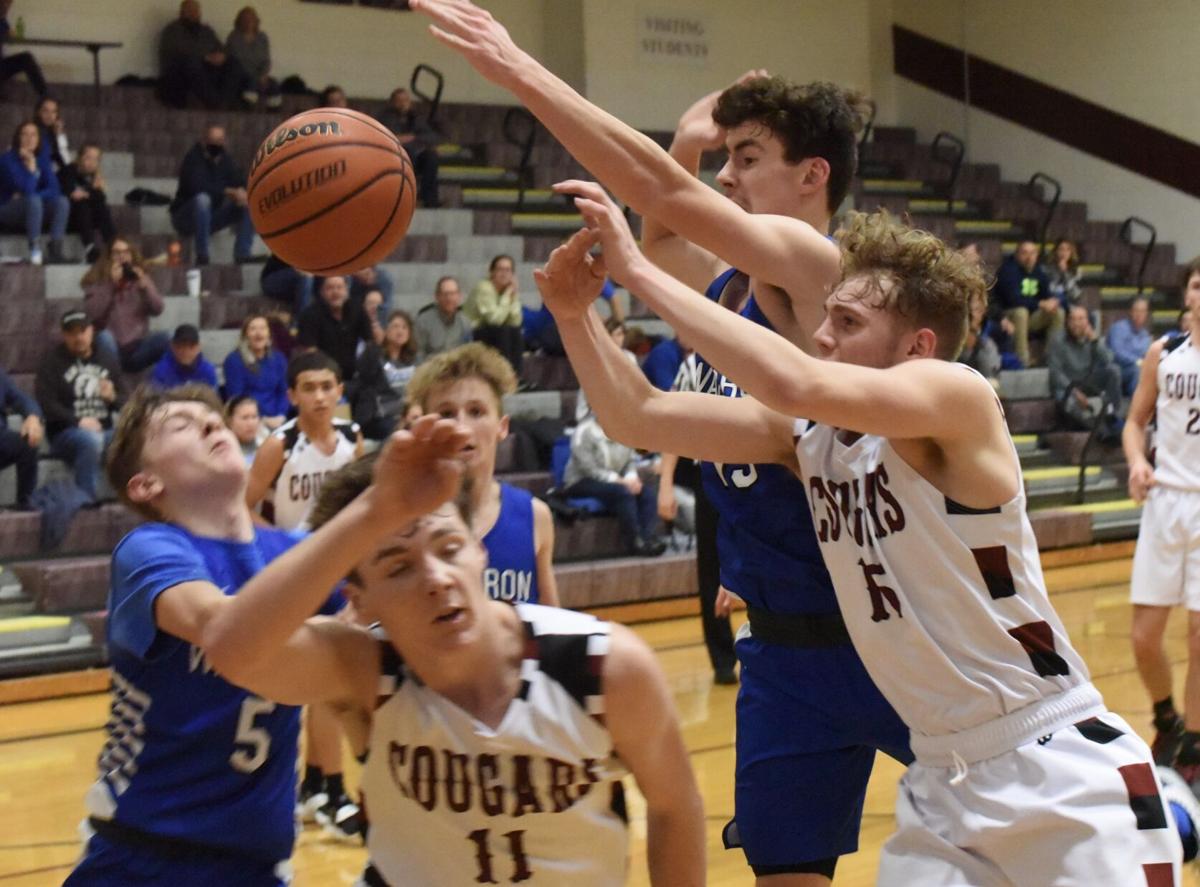 This 3-pointer from Chase Boswell tied the game with 1:11 to go, and Boswell got a steal and a layup seconds later. They were two huge plays that helped the Cougars pull out a thrilling home win Friday.

It kept the Cougars undefeated in Mid-Hoosier Conference play, setting up a winner-take-all showdown against Edinburgh on Friday.

Friday’s win was followed by a 78-54 loss Saturday at Covenant Christian.

With their two leading scorers sitting on the bench in the final minutes of Friday’s home game, the Cougars found a way to make the crucial plays.

Boswell sank a 3-pointer to tie it with 1:11 to go. Seconds later, made a steal at halfcourt, then raced down and made a layup to give the Cougars their first lead after trailing the entire second half.

Senior Tyler Sporleder made a layup with 1:44 to go that pulled South within one, which was also a crucial bucket in the comeback.

Freshman Jacob Scruggs went 3-for-4 at the free-throw line in the final 25 seconds to help seal the win.

“My adrenaline was rushing,” Boswell said. “It was weird not having Lane (Lauderbaugh) in the game in the final minutes, so we all had to step up.”

Boswell started in place of the injured Hunter Johnson. He scored eight points — all in the second half.

Not only were the Cougars playing without their second-leading scorer in Johnson (who must wear a cast for two weeks after suffering a fracture in his right wrist), but they were without two more starters down the stretch.

Lauderbaugh joined Evan Wullenweber on the bench. The junior fouled out after being called for a charge, a call the South Decatur fans vehemently disagreed agree with.

The Cougars had only one practice all week, on Monday when they mostly worked on shooting to save their legs ahead of expecting to play Tuesday. However, snow canceled the game against Crothersville and the Cougars weren’t able to work any more on how to play without Johnson in the lineup.

“Maybe more so learning what we can do, we might’ve learned what we can’t do,” Wildey said. “And that’s OK. We did learn some things. Hat’s off to Waldron; thought they played a great game. They made shots all night long, and they made free throws all night long.”

Waldron drops to 3-15 overall and finishes winless in the MHC at 0-6. The Mohawks nearly won their second straight game after suffering 14 straight losses.

Trapping defense helped force Waldron into making turnovers down the stretch, and the Cougars made the big plays.

South got all of its scoring from four players: Lauderbaugh 30, Sporleder 13, Scruggs 11 and Boswell eight.

Sporleder led the way with nine rebounds, while Scruggs led in assists (four) and steals (four).

Dale Peters and Avery Seegers, players who typically see all of their action in junior varsity games, were inserted into the game in the final minutes.

Wildey said he hopes players having take on bigger roles like that will make the Cougars better.

“Somebody had to step up or we lose,” he said. “That’s kind of neat to see. Those guys don’t always get that opportunity. Down the stretch like that in a normal game we’re either going to go to Lane or Hunter most of the time. You look around and neither one is there, Evan isn’t there to shoot the 3. They had to step up and they did.”

The Cougars played well in the second and third quarters at Covenant Christian, but they got blown out in the first and fourth quarters.

Turnovers were an issue: the Cougars made 32 miscues after making 19 against Waldron.

Wildey knew the Warriors (16-4) were going to be a difficult matchup.

Lauderbaugh racked up 25 points, 15 rebounds and three assists. He was 4-for-7 from behind the arc after also hitting four trifectas the previous night.

Scruggs was next with 11 points.

Also scoring were Peters with five, and Boswell, Sporleder and Brady Lane with two apiece.

SD has three games on its schedule this week, but of course that might change based on the weather: Tuesday against Southwestern (Hanover), Thursday at Jac-Cen-Del and Friday against Edinburgh.

Had the Cougars lost to Waldron, Friday’s game would’ve meant playing for a share of the title instead of a winner-take-all scenario.

“It was really important,” Boswell said of beating Waldron. “Down at the end we really had to get after it in crunch time and make sure we go into that game with no losses in conference.”