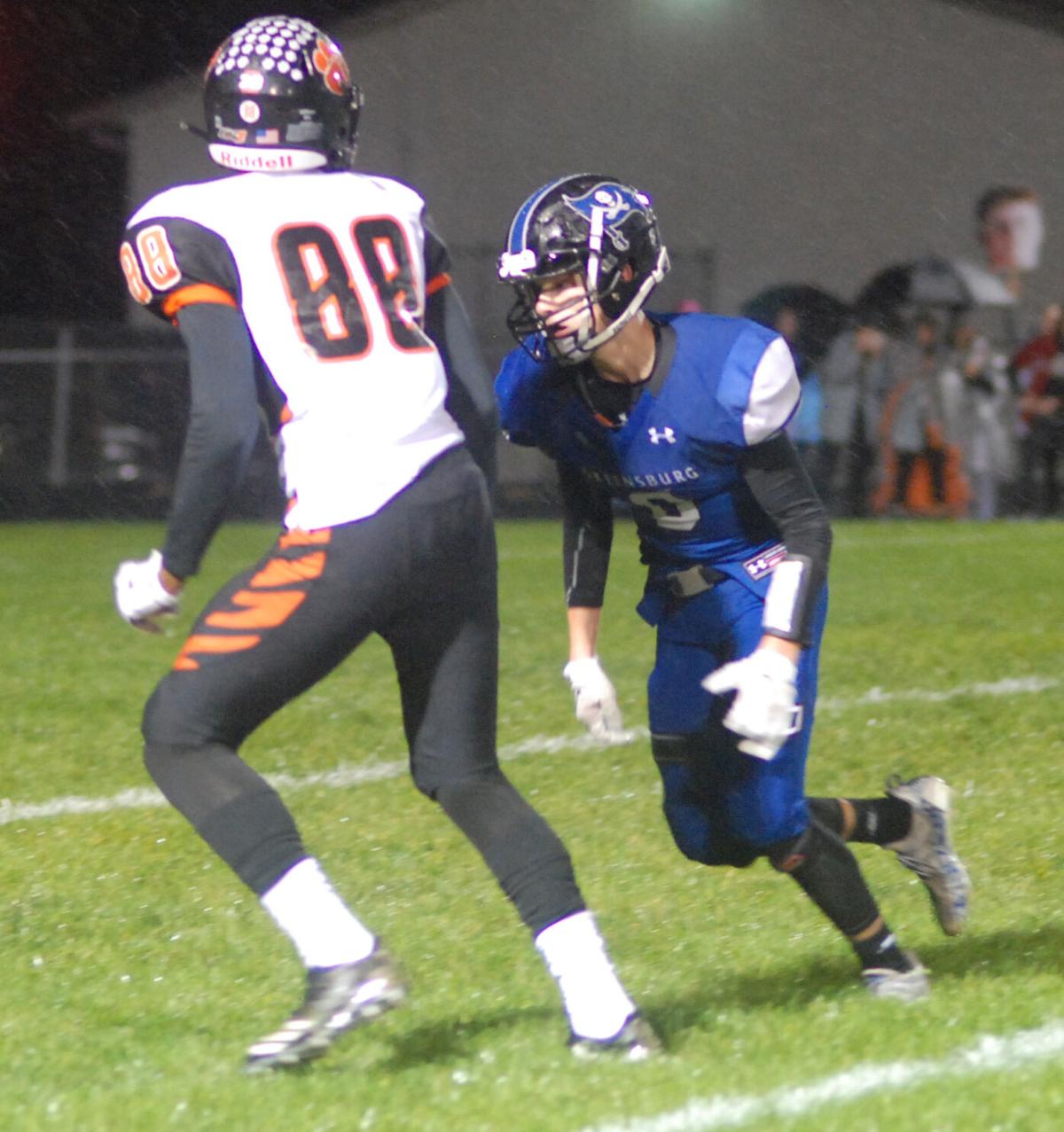 Greensburg’s Owen Meadows defends Lawrenceburg’s Dahya Patel during sectional action Friday. The Pirates’ defense did not allow a completed pass in the contest.

Greensburg’s Owen Meadows defends Lawrenceburg’s Dahya Patel during sectional action Friday. The Pirates’ defense did not allow a completed pass in the contest.

GREENSBURG — With a sixth consecutive victory, the North Decatur Chargers earned a berth in the sectional championship game. North (6-4) knocked off Milan 26-12 in the sectional semifinal and will travel to Tri this Friday to face the 9-2 Titans for the sectional title.

Despite the wet, rainy conditions, the Chargers advance to the sectional final for the third straight year.

Milan opened the scoring with a 1-yard touchdown run by Logan Reed to put the Indians on top 6-0.

North answered with an 11-yard TD run by Reid Messer to put the Chargers in front 7-6 after one quarter of action.

The Chargers scored early in the second quarter on a 21-yard run by Messer. North led 14-6 at the half.

Milan cut into the North lead with a 40-yard touchdown pass from Braden Rohrig to Jeremiah Johnson. The 2-point conversion failed and North held the 14-12 lead.

Messer added a 14-yard touchdown run in the third quarter and put the game out of reach in the fourth quarter with a 3-yard TD run as the Chargers eliminated the Indians 26-12.

Messer had 254 yards on the ground and four touchdowns. The Chargers defense held the Indians to only 239 yards of total offense.

GREENSBURG – The Pirates gave Class 3A No. 5 Lawrenceburg a scare in the IHSAA sectional semifinal on Friday. After trailing 9-0 at the half, the Pirates cut the deficit to 9-7 in the third quarter. A late touchdown by Lawrenceburg allowed the Tigers to escape with the 15-7 victory.

Lawrenceburg advances to the sectional final where the Tigers will host No. 6 Brownstown Central. The Braves (10-0) eliminated Batesville 28-14 in the semifinal.

A constant rain throughout the game and the Pirates’ defense limited Lawrenceburg’s offense to run-only. The Tigers did not have any passing yards in the contest. Lawrenceburg did rush for 313 yards.

Lawrenceburg opened the scoring with a 5-yard run by Teagan Bennett. Mary Brewington added the extra point to make it 7-0 in the first quarter.

Later in the first half, Greensburg’s defense made a big goal line stand to hold the Tigers out of the end zone and keep the margin at 7-0.

The lone score in the second quarter came on a safety to give the Tigers a 9-0 lead at the half.

Greensburg got on the board in the third quarter on an 84-yard touchdown pass from Sam West to Kaden Acton. Grayson Newhart added the extra point to cut the deficit to 9-7.

Lawrenceburg added an insurance score in the fourth quarter as Luke Pierce scored on a 3-yard run to make the final score 15-7.

Acton led the Pirates with 84 yards receiving and 13 yards rushing.