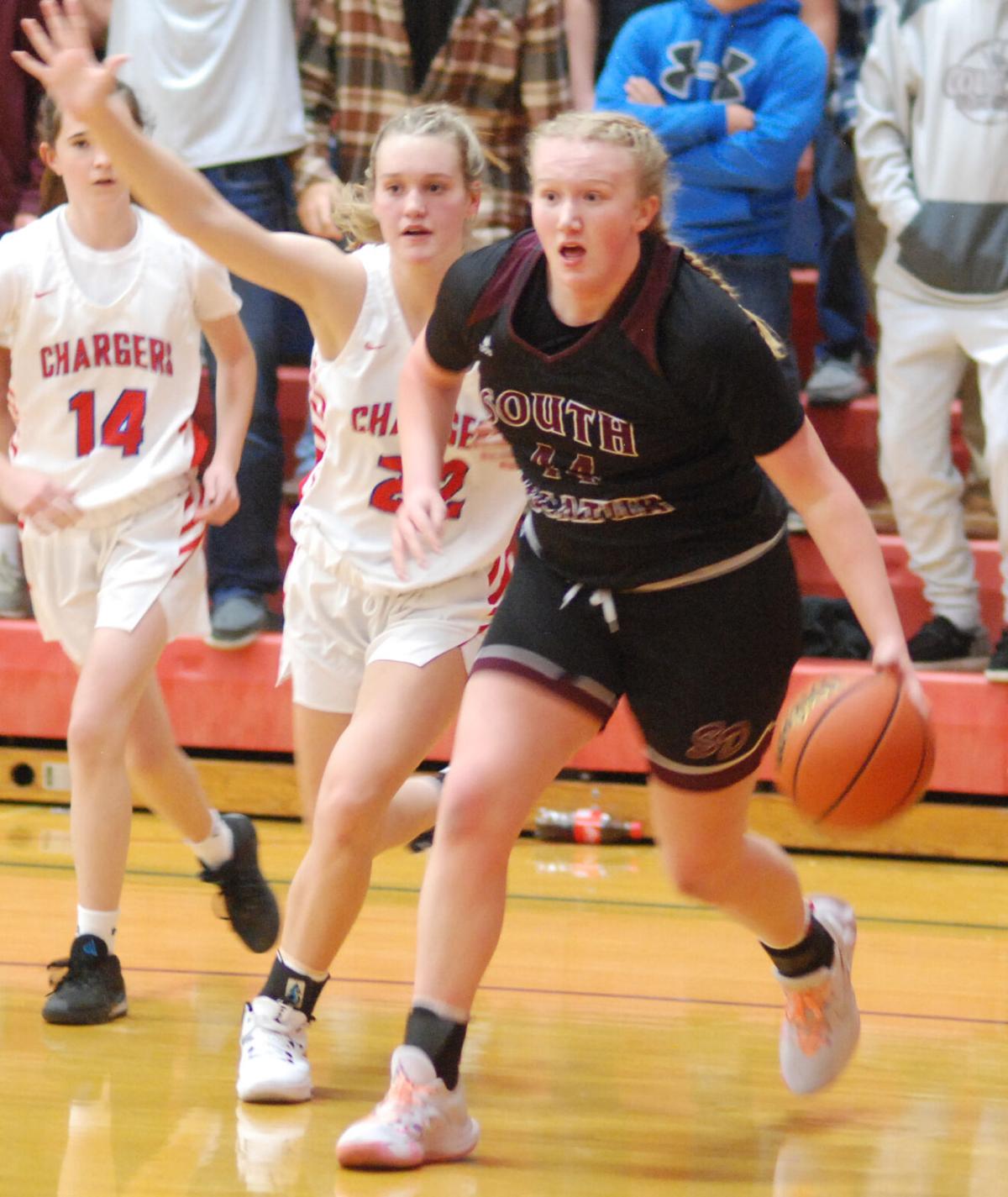 South’s Loryn Pate drives baseline around the defense by North’s Madi Allen in the Lady Chargers’ victory over the Lady Cougars. 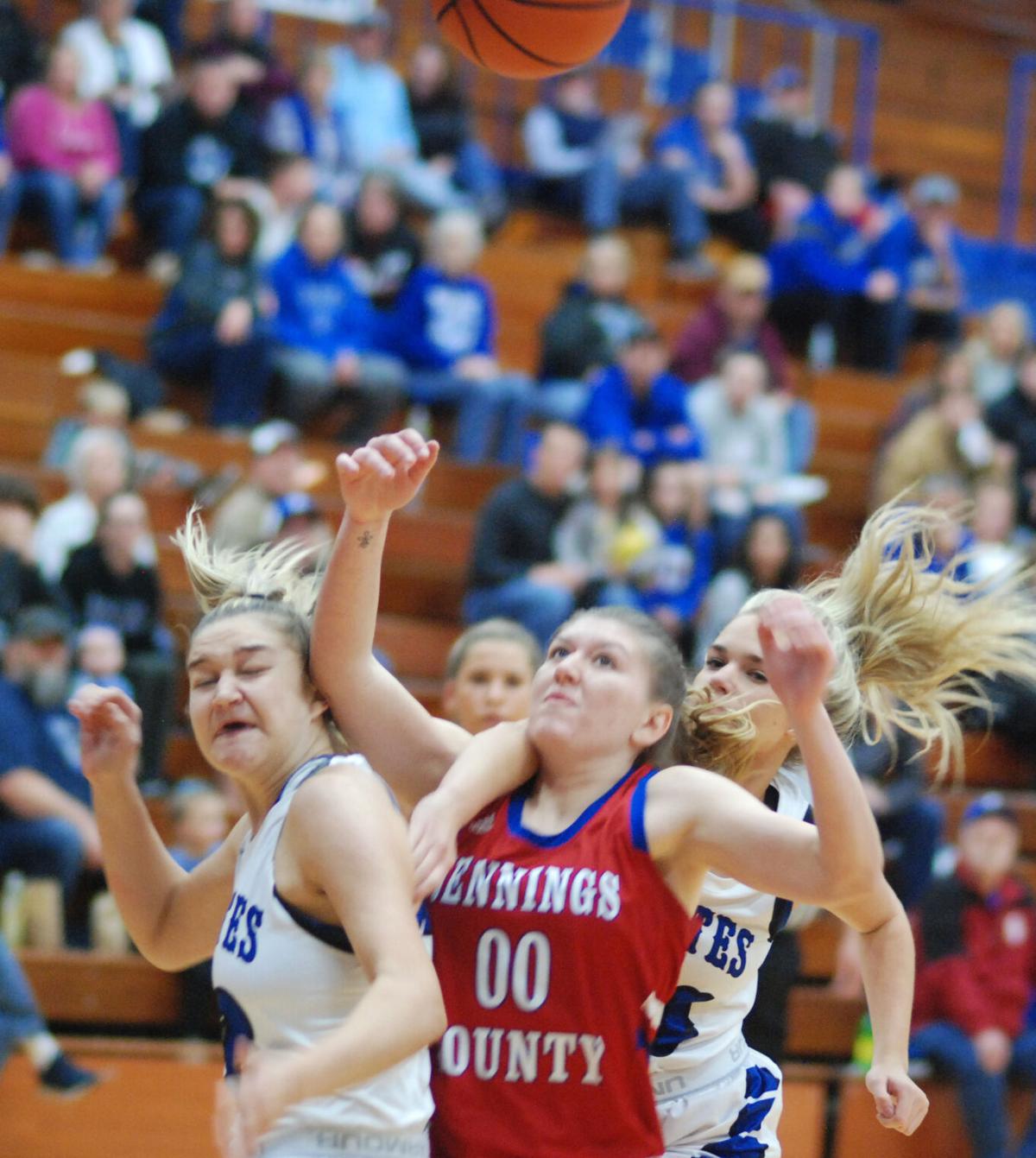 It was a physical battle in the paint on Saturday as the Lady Pirates hosted Jennings County. Pictured are Greensburg’s Leah West and Molly Richards surrounding Jennings County’s Juliann Woodard.

South’s Loryn Pate drives baseline around the defense by North’s Madi Allen in the Lady Chargers’ victory over the Lady Cougars.

It was a physical battle in the paint on Saturday as the Lady Pirates hosted Jennings County. Pictured are Greensburg’s Leah West and Molly Richards surrounding Jennings County’s Juliann Woodard.

The Lady Pirates traveled to county-rival South Decatur on Friday and returned with a 51-30 victory.

On Friday, the Lady Cougars opened the scoring with a rebound bucket by Makayla Somers. The Lady Pirates answered with seven straight points – two from Molly Richards, three from Carlee Adams and two from Mylie Wilkison.

A Paige McQueen free throw for South stopped the Greensburg run, but five straight from Wilkison capped the first quarter with Greensburg leading 12-3.

After a free throw by Kiley Best cut the deficit to 15-6 with 6:11 to play in the second quarter, Greensburg Kayla Tamm connected on back-to-back 3-pointers to push the lead to 21-6. Best scored in the lane for South before the Lady Pirates got six straight points from Wilkison to extend the lead to 27-8.

Following a South free throw, Leah West scored to close the first half with Greensburg on top 29-9.

South’s Makayla Somers opened the scoring in the third quarter, but Adams had the answer on the other end with a 3-pointer. Adams followed with a baseline jumper to push the lead to 34-11.

After West opened the scoring in the fourth quarter, South went on a 6-2 run. Brayley Sundal had four in the run and Paige McQueen added two. Another bucket by West made the Greensburg lead 51-25.

Greensburg had three scorers in double figures led by Wilkison 17, Tamm 15 and West 10.

On Saturday, North Decatur hosted South Decatur in the annual Civil War Game. The Lady Cougars took control early with a 17-12 lead after the first quarter. North responded and outscored South 21-12 in the second quarter to lead 33-29 at the half en route to the 63-48 victory.

South’s Loryn Pate was hot from beyond the arc, connected on a trio of 3-pointers for nine first quarter points. Kiley Best added six points for the Lady Cougars. North got six points from Ella Kunz and four from Madi Allen. The Lady Cougars led 17-12 after one quarter.

North outscored South 16-12 in the third quarter, led by Allen’s seven points. Haley drained another bomb for the Lady Chargers. Pate and Makayla Somers both had four points for South. North led 49-41 heading to the fourth quarter.

The Lady Chargers put the game away by doubling up the Lady Cougars 14-7 in the fourth quarter.

For North, Allen finished with 20 to lead all scorers. Kunz was next for the Lady Chargers with 17 followed by Bohman 13, Haley seven, Clare Kinker three and Barker three.

The Lady Bulldogs traveled to South Ripley and suffered a 33-25 loss to the Lady Raiders.

Batesville managed only 25 points against the South Ripley zone defense. Despite the struggles offensively, the Lady Bulldogs still managed to lead most of the first half.

South Ripley outscored Batesville 20-10 over the final 16 minutes to post the victory.

On Friday, the Lady Bulldogs fell at Seymour 57-42.

The Lady Bulldogs were an impressive 17-of-21 from the free throw line.

“It was a tough weekend for us,” BHS coach Bryan Helvie commented. “We continued to turn the ball over too many times and did not shoot the ball well.”

“That is not a good combination,” Coach Helvie added.

“Still, I was pleased with some aspects of our play in each game,” Helvie said. “We will continue to work hard and get better, that I am confident of with this group of young ladies.”

Coming off a road loss at Mt. Vernon, the Lady Lions got back in the win column with a big victory over Beech Grove 56-11.

Sparks and Williams led JCD on the boards with six rebounds each. Williams also had a team-high four assists. Rider tallied seven steals.