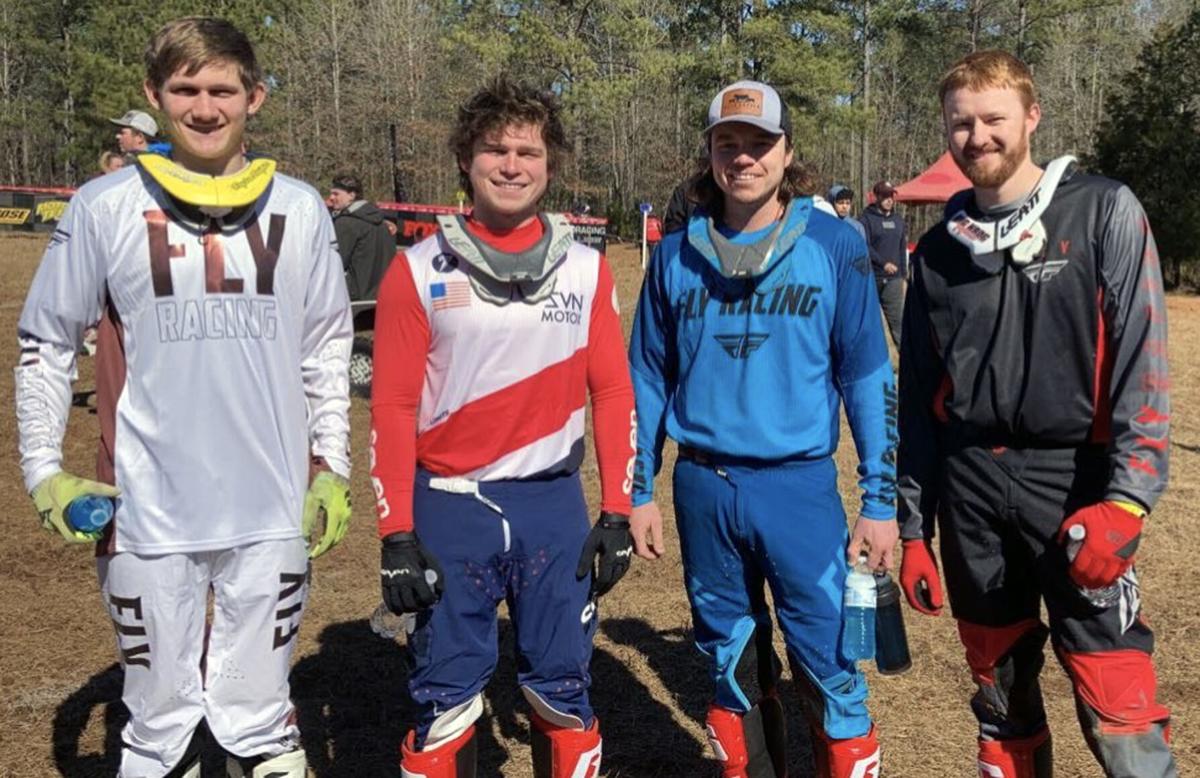 Curt Bausback competes in a cross country race. He competes in the pro-am division at nationals and the pro division locally. 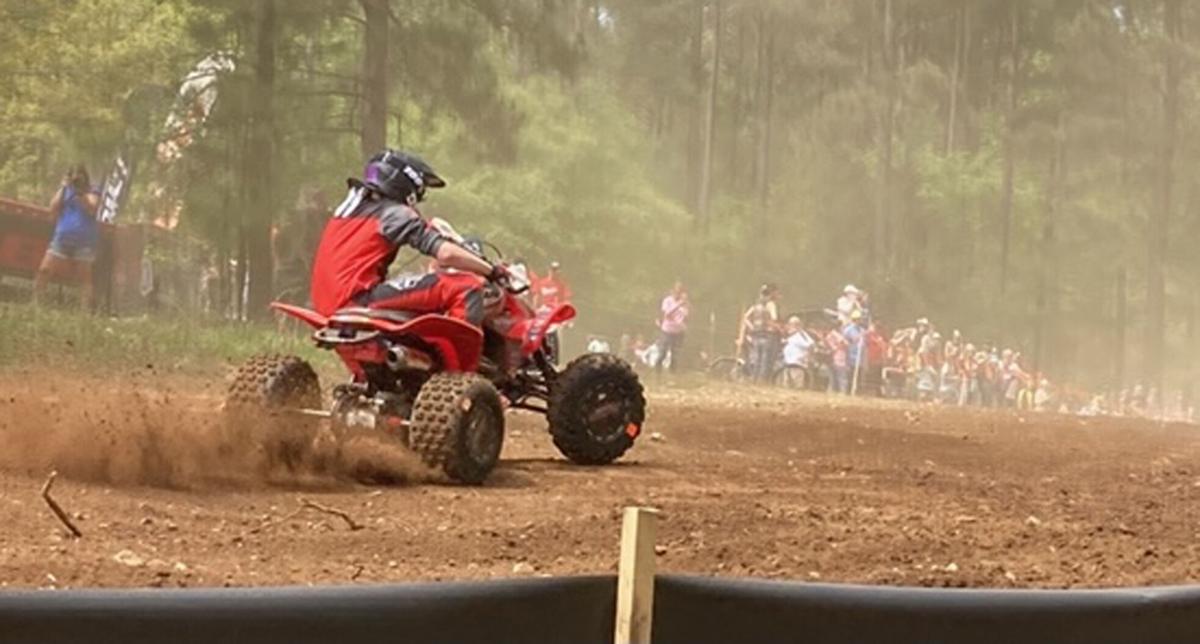 Eric Kroger takes off in the hole shot, which is a dead-engine start. 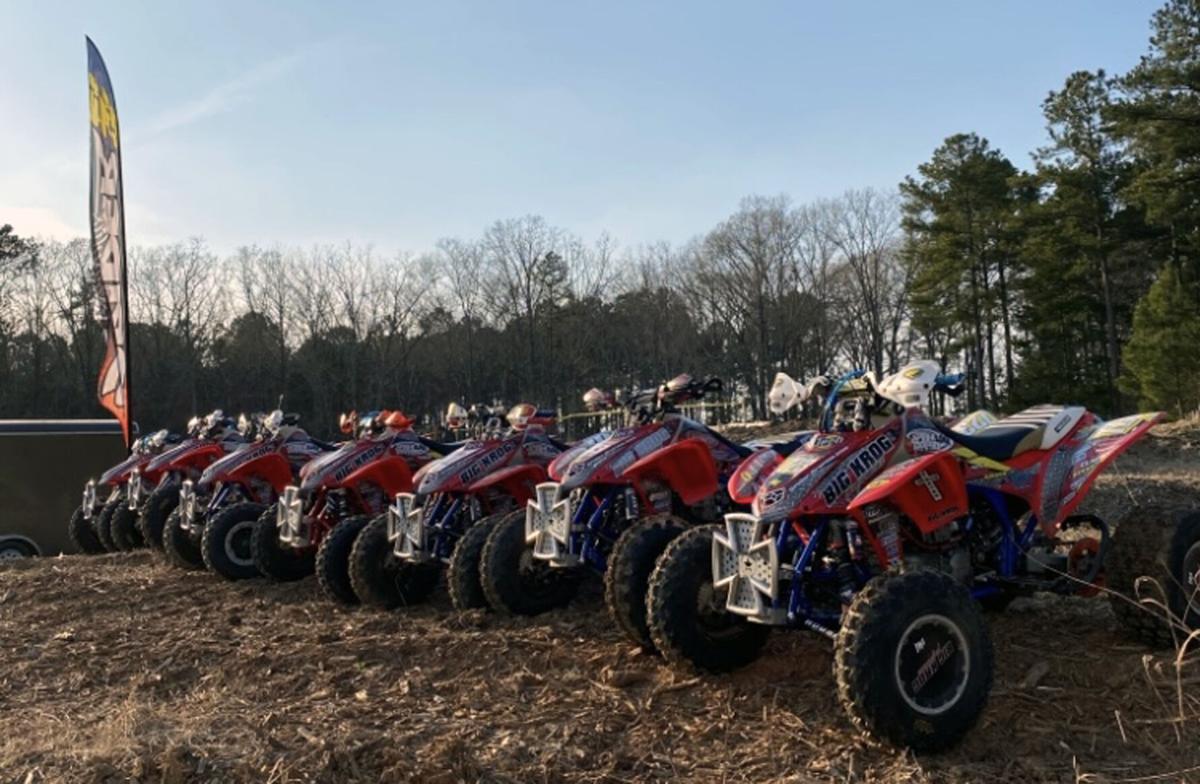 Curt Bausback competes in a cross country race. He competes in the pro-am division at nationals and the pro division locally.

Eric Kroger takes off in the hole shot, which is a dead-engine start.

Eric Kroger was 14 when he started racing ATVs.

“I just like riding,” Kroger, who’s now 25, said. “The adrenaline rush of riding a four-wheeler is what I’ve always loved to do. That’s my favorite part of it.”

Kroger graduated from Greensburg Community High School in 2014 and took a break from cross country racing, but got back into it a couple years ago.

He’s competing on the national stage this year. Kroger organized a race team called Big Krog Performance, which is also the name of his mechanic business.

The circuit features 13 races, and four remain – two in September and two in October, including the season-finale in Crawfordsville at Ironman Raceway.

Kroger started racing with Cody Bausback when they were in junior high after convincing their parents to let them try it.

“We were kind of hooked ever since then and never stopped until we graduated from high school,” Bausback said. “Now that I’m out of college we kind of decided to get back into it.”

They’ve competed for years on the Indiana Cross County Racing, or IXCR, and still do this year when they’re not busy traveling for the national races.

Bausback, who is a 2015 GCHS grad, enjoys several aspects about racing four-wheelers, particularly the challenge.

“You put all this time and money into it. It’s really up to you,” he said. “You can spend as much money as you want and still not do well. It’s up to you and how much work you decide to put into it. And it’s a good weekend getaway from the real world.”

Bausback works for his family’s business, Standard Fertilizer. Any spare minute he’s not there he’s busy working on his quad, getting everything ready to race.

Cross country racing is essentially a two-hour race through the woods. It’s timed, versus a traditional race where the first to complete a set amount of laps wins.

“It’s hard to explain, but they try to end it so the leader comes in at two hours,” Bausback said.

Most courses feature laps that take about 30 minutes to complete. A lot depends on when the white flag is thrown.

“Once they throw the white flag, whoever is first one back around, then it’s over no matter what, then everyone behind them has to finish,” Kroger said.

“It’s a weird sport. A lot of people don’t understand it.”

The quads can run as fast as 75 mph, and riders go as fast as they want. Likely the most dangerous aspect, however, is before they get up to speed.

The start of the race is called the hole shot. All of the quads are lined up to start, with about 20-25 for each class at nationals. The flag is thrown, and all riders start their quads and take off.

Last year, Kroger was competing at Crawfordsville and was hauling to the first turn, likely going 50-60 mph. He swung wide to get to the second turn, when another racer came alongside of him.

“We clipped and I tumbled a few times, smacked on the ground,” he said. “That was it. I ended that one quick, about 15 seconds of fun.”

Kroger broke his collarbone, and has broken “plenty” of bones over the years.

“There’s always that chance,” he said. “We all wear neck braces, but still.”

The races also feature what’s called a pro hill. If you shoot the hill, you can typically save about 30 seconds versus going around it.

Bausback wrecked his quad on a pro hill this year when a kicker happened and his back end came up.

“Before I knew it my feet were over my head,” Bausback said. “I got it stopped. Normally at these races if something like that happens and there are spectators, they’ll grab ahold of your quad until you can get back on it and keep going. I was a little shaken up and by the time I got back on it the quad was already rolling back down the hill, so I knew I couldn’t ride it all the way back, so I jumped off. That thing flipped probably six times by the time it got to the bottom and stopped.”

While his quad was wrecked, Bausback was fine aside from a couple bruises on his arm.

“Nothing major,” he said. “Could’ve been a lot worse, that’s for sure.”

Kroger and Bausback compete in the Junior B division at nationals. Not surprisingly, the competition is much stiffer than the Indiana circuit.

Bausback has won five straight races on the IXCR. He’s had a few good races at nationals, but also has experienced some bad luck.

His younger brother, Curt, runs the Pro-Am class at nationals and the pro class at local races.

“So he’s a little faster than we are,” Bausback said.

“Us three went out Sunday to a series we don’t race for points just for fun, and we got fifth, sixth and seventh overall.”

The pro class features prize money, but the other racers are competing for the sheer enjoyment and bragging rights.

“We’re basically out there spending thousands of dollars hoping to win a $7 piece of wood, and if you win you get a little 50 cent medal,” Bausback said.

Competing at nationals takes a lot of time and money. Kroger hopes to gain exposure for his mechanic’s business, but this might be the only year on the GNCC circuit for the Big Krog Performance team.

“We plan on hitting the rest of nationals this year and seeing where everybody ends up. We went into it thinking this was going to be a one-year deal with nationals, because it does take that much money when you’re racing twice as much and traveling so much,” Bausback said.

“I plan to keep trying to move up through the ranks in the Indiana series. If I keep winning this year, next year I’ll probably have to move up to A Class.”

Bausback works on his own quad, but does it at Kroger’s house.

“He sees things that I don’t, that’s for sure,” Bausback said of Kroger. “He goes over everything with a fine-tooth comb. … He definitely knows what he’s doing for sure.”

Kroger works in maintenance at Gecom. He’s in the process of building a shop just east of Napoleon, which has a Batesville address, and foresees working on quads will become a full-time job eventually.

“I want to get everything lined up first,” he said.

The GNCC series will resume Sept. 11-12 in Beckley, West Virginia, and will conclude Oct. 23-24 in Crawfordsville.

Points are accumulated for each race, with each racer’s best nine races out of the 13 counting when the season concludes.

Kroger, Butz, Norton, Grieshop and Curt Bausback have all won races in the GNCC series.

To track how they’re doing in their classes, visit http://www.racer-results.net/results/gncc/current/results.asp and use the search bar.