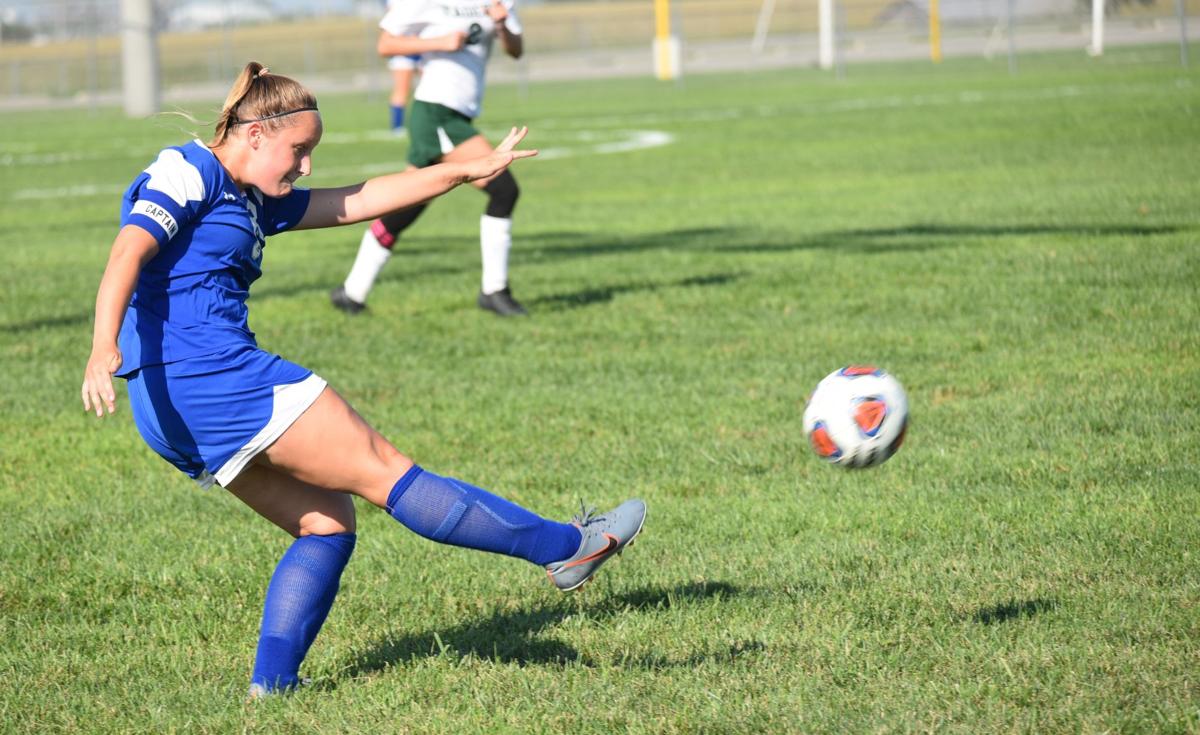 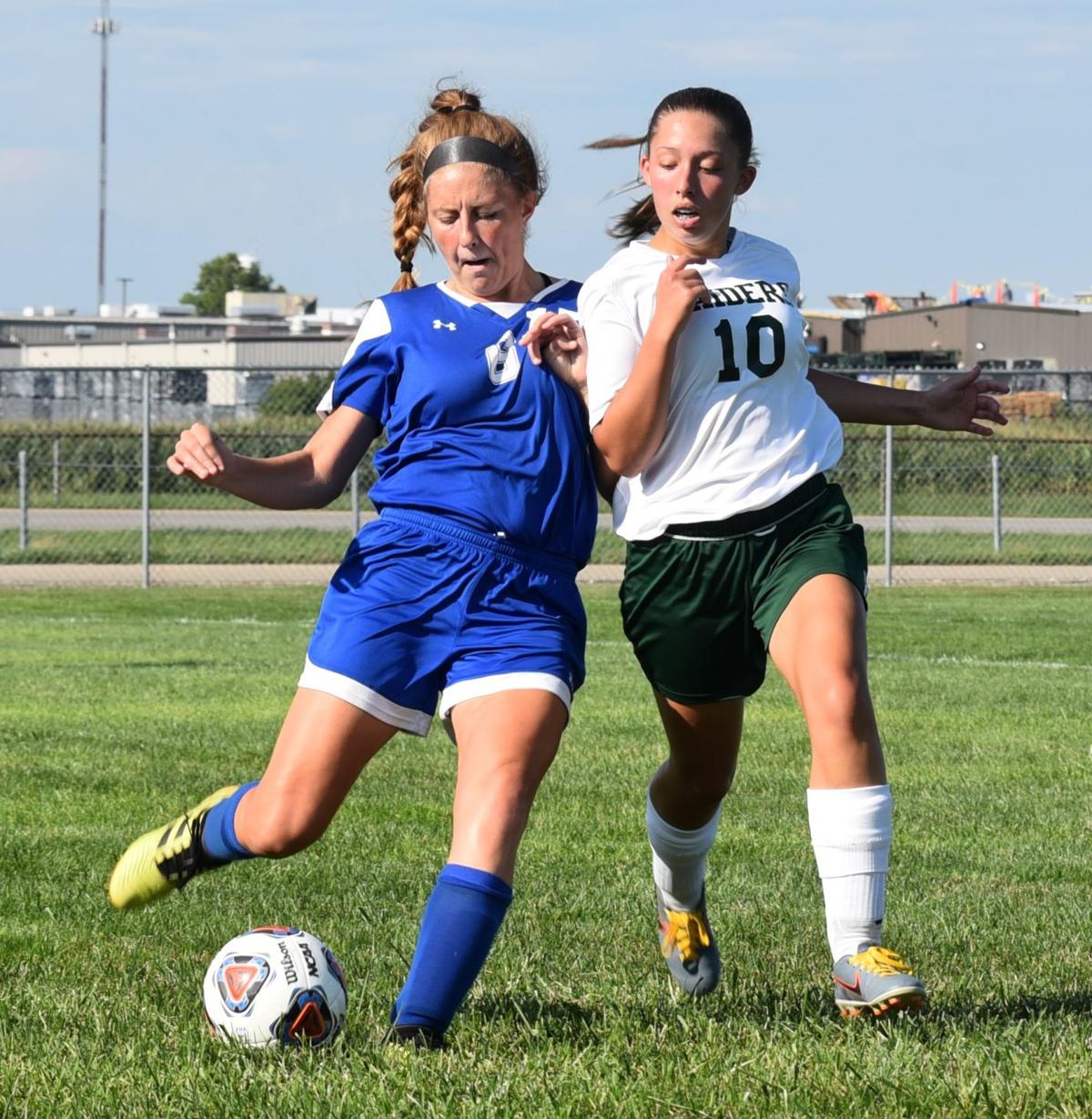 Alaina Nobbe battles a Lady Raiders player to move the ball up the line to a Lady Pirate teammate.

Alaina Nobbe battles a Lady Raiders player to move the ball up the line to a Lady Pirate teammate.

GREENSBURG — The Lady Pirates faced off against South Ripley Tuesday night and picked up their first win of the season.

The game started with an offensive attack by the Pirates. They managed to control the fields for the majority of the game. With four minutes left in the first half Emily Rosales scored the Lady Pirates’ first and only goal off an assist from Kayla Haycock.

The Pirates attempted 18 shots on goal and kept the fight going the full 80 minutes.

“The credit for this win goes to the defense,” head coach Ryan Morlansaid. “The back four, lead by captain Kelsey Scott, Alaina Nobbe, Hilary Ernstes and Elizabeth Hyatt, managed to keep the play on the South Ripley side of the field most of the game.”

Pike stated, “you (Alvarez) have been an amazing teacher not only in science, but also in life lessons.” Pike went on to say “you’ve always been there when I needed you the most. Thank you for an amazing three, going on four years.”

This is the Lady Pirates first win (1-2-2). They will face Madison on Thursday on the road.

Including invitationals, the Pirates are now 17-5 on the season, with an unblemished record in dual matches.

The ladies will be back in action on Friday night at Jennings County.

Greensburg Pirates played their first away game of the season on Tuesday, and fell to the Southwestern Spartans 4-0.

The boys played defensively for the majority of the game, allowing several Spartan opportunities, while not countering with any of their own.

Southwestern scored midway through the first half off of a corner kick and then allowed two more to go in before the half time buzzer sounded.

The Pirates were able to contain the Spartans for much of the second half, until Southwestern got a one on one with keeper Jimmie Day and were able to put it in the back of the net.

Despite the 4-0 loss, junior Jimmie Day was a bright spot for the Pirates, registering 17 saves on the day.

The Pirates only registered three shots throughout the game.

Aggressive and accurate serving came from Hannah Messer who was 15-15 with two aces, followed by Raegan Rigney who was 11-11.

At the net, Anna West led the Pirates in kills with 14 while Josie Nobbe put down six.

Taylor Cooney continues to be instrumental in the offense putting up 23 assists, but more than that her reaction to the ball and control of her body is impressive. She also served 19-21 with four aces.

The Lady Pirates are now 11-1 on the season and host Madison on Thursday.

The North Decatur Soccer Club got the season rolling last week with a pair of wins on the road to start their regular season at 2-0. Despite having two key starters sidelined due to injury the Chargers still prevailed victorious.

On Tuesday they defeated a big school in Jennings County 3-1 in a hard fought battle. Aiden O’Dell paced the Charger’s with two goals while Cy Miller chipped in one.

The North Decatur Soccer Club improved its overall record to 3-0 with a 4-1 victory on the road on Tuesday evening at Hauser.

A great team effort and effective passing by Noah Weisenbach, J.R. Frensemeier, Ethan Smith, Micah Smith and the rest of the forwards and midfielders helped the Charger’s control the offensive end of the field. This along with another stellar team defensive performance, proved to be the decisive factor.

Aiden O’Dell led the Charger’s with two goals while Joey Yake and Cy Miller each chipped in one a piece. Eli Weisenbach and Logan O’Dell each recorded an assist. Sam Tuchmann also stood tall recording multiple shots on goal.

Up next for the Charger’s is a battle for the coveted County Cup next Tuesday at rival Greensburg. Match time is set for 5:30 p.m.

The Lady Chargers were lead by Meet Medalist Jenna Walton and followed by Gracie Osting in third. Rounding out as top ten finishers were Ellie Cox eighth place and Paige Reisman in ninth.

“Hot and humid conditions along with injury and sickness hampered the overall performance for the evening,” head coach Kyle Nobbe said. “However, we showed great toughness and determination as we continue to build on the season.”

The North Decatur Chargers move to 5-4 on the season with a three set win over Jac-Cen-Del on Tuesday night.

Jenna Geis had an impressive game at the net tonight hitting 15/17 with 10 kills and one solo block.

Kara Muckerheide once again led the offense setting 94/95 with 33 assists.

Lainey Crites played with a lot of hustle and had 12 assists on the night and four aces. Caroline Stapp added seven digs and Erin Schwering has five kills.

With only three players for the team we were unable to post a true team score, but Sidney Parmer still represented the Chargers with a win.

She shot a 40 to earn individual medalist honors.

Katy Kinker (55) and Laronda Schwartz (69) rounded out the team’s scores.

Greensburg boys tennis captured a tough win on the road at Waldron on Tuesday winning 3-2.

The Pirates doubles continued to stay hot with the No. 1 doubles team of Sam Bower and Ben Duerstock winning 6-2, 6-1 and the No. 2 doubles team of Karson Scheidler and Bryce Stringer battling back to win in three sets, 5-7, 6-4, 6-1

All three singles matches were close, but Isaac Tebbe was the lone winner for Greensburg at No. 2 singles with a 6-3 7-5 victory.

Greensburg plays at Connersville on Thursday.

The Lady Pirates came away with a perfect score of 15 behind Brenner Hanna’s win and Jonathon Ralston took the lead just after the three km mark in the boys race and raced to his first career win.

Ralston crossed the finish line in 18:48 pacing the Pirates to the victory with 19 pts.

Nate Murray (7th) and Sean Slagle (10th) were also in the top ten for the Pirates.

The Cougars finished third in the boys team competition. They were led by Trevor Newby’s 20:45, placing him in ninth.

Logan Platt was the next Cougars to come in at 22:37, placing himself in 15th.

With the Lady Pirates securing eight of the top 10 spots, the Lady Cougas filled out the remainder of the spots.